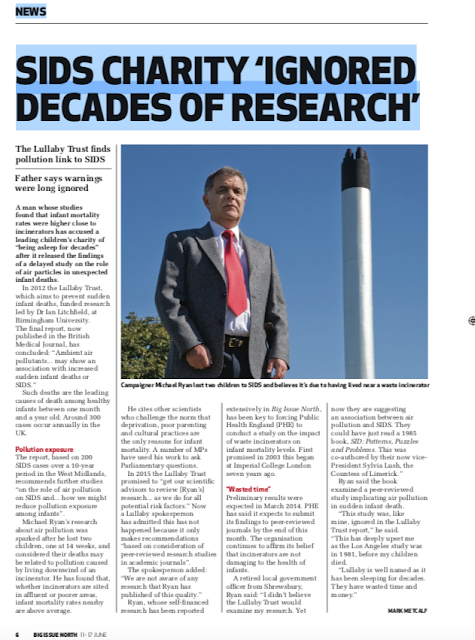 A man whose studies found that infant mortality rates were higher close to incinerators has accused a leading children’s charity of “being asleep for decades” after it released the findings of a delayed study on the role of air particles in unexpected infant deaths.
In 2012 the Lullaby Trust, which aims to prevent sudden infant deaths, funded research led by Dr Ian Litchfield, at Birmingham University.
The final report, now published in the British Medical Journal, has concluded: “Ambient air pollutants... may show an association with increased sudden infant deaths or SIDS.”
Such deaths are the leading causes of death among healthy infants between one month and a year old. Around 300 cases occur annually in the UK.
Pollution exposure
The report, based on 200 SIDS cases over a 10-year period in the West Midlands, recommends further studies “on the role of air pollution on SIDS and... how we might reduce pollution exposure among infants”.
Michael Ryan’s research about air pollution was sparked after he lost two children, one at 14 weeks, and considered their deaths may be related to pollution caused by living downwind of an incinerator. He has found that, whether incinerators are sited in affluent or poorer areas, infant mortality rates nearby are above average.
He cites other scientists who challenge the norm that deprivation, poor parenting and cultural practices are the only reasons for infant mortality. A number of MPs have used his work to ask Parliamentary questions.
In 2015 the Lullaby Trust promised to “get our scientific advisors to review [Ryan’s] research... as we do for all potential risk factors.” Now a Lullaby spokesperson has admitted this has not happened because it only makes recommendations “based on consideration of peer-reviewed research studies in academic journals”.
The spokesperson added: “We are not aware of any research that Ryan has published of this quality.”
Ryan, whose self-financed research has been reported extensively in Big Issue North, has been key to forcing Public Health England (PHE) to conduct a study on the impact of waste incinerators on infant mortality levels. First promised in 2003 this began at Imperial College London seven years ago.
“Wasted time”
Preliminary results were expected in March 2014. PHE has said it expects to submit its findings to peer-reviewed journals by the end of this month. The organisation continues to affirm its belief that incinerators are not damaging to the health of infants.
A retired local government officer from Shrewsbury, Ryan said: “I didn’t believe the Lullaby Trust would examine my research. Yet now they are suggesting an association between air pollution and SIDS. They could have just read a 1985 book, SID: Patterns, Puzzles and Problems. This was co-authored by their now vice- President Sylvia Lush, the Countess of Limerick.”
Ryan said the book examined a peer-reviewed study implicating air pollution in sudden infant death.
“This study was, like mine, ignored in the Lullaby Trust report,” he said. “This has deeply upset me as the Los Angeles study was in 1981, before my children died.


“Lullaby is well named as it has been sleeping for decades. They have wasted time and money.”