WALK THIS WAY + FOOD FOR THOUGHT

VIEW THE LANDSCAPE AS YOU HAVE NEVER SEEN IT

WALK THIS WAY + FOOD FOR THOUGHT - how most locations can be used to harvest trees & food, whilst providing pasture for sheep & cattle and many species of birds & insects

We produce around half the food we eat. Now, partly due to Brexit, Britain’s food system faces its biggest challenge.

Yet we can do all sorts of things with land & the soil that makes the Earth what it is. It can take a lot of toil to make the soil healthy. Soil & toil. Land & labour. If we want to change the food we eat, it starts here as we are going on a healthy 4-mile round walk that also includes honouring the Pendle Witches exactly 218 years on.

TUESDAY AUGUST 18 - bring your car to Slaidburn Car Park (sat nav: post code BB7 3ES), where will rendezvous and sort out cars. This is around 2 miles from where walk will commence, and can you be there no later than 11.30am. Bring walking shoes, charged phones, food, water  & a mask. Booking is essential because a maximum of 12 can attend, due to very limited parking space. Note - this is the first of a series of planned walks.

Fresh air and a chance to walk up on the hills will never feel so good.  Please accept an invite to come to the Croasdale Valley, near Slaidburn, Lancashire and see the landscape like you have never seen it before.

Soil scientist Charlie Clutterbuck will be back where he farmed over four decades ago. As Britain will need to rethink its food and farming policies after the CV19 crisis has exposed some major faults, then this day out will be a chance to take in some remarkable scenery plus an opportunity to discuss how to recapture the countryside so it can be more effectively used for all.

You will hear about oats, swede that can be grown as a fodder crop for cattle such as  Belted Galloways, that require virtually no bought-in food and graze lightly, skylarks, hay, birch and forests.

There will also be opportunities to see how large landowners are being subsidised because the walk takes in a section of the hillside set aside for grouse shooting.

Finally, you will be able to honour the Pendle Witches, all but two of whom were tried at Lancaster Assizes on 18–19 August 1612, and ten of whom were forced to trudge the 11-mile long walk from Slaidburn, along the route we take, to Wray in 1612 to be executed.

You will see that the Grand Mansions of the landed gentry still exist whilst the hovels of those accused are harder to find. https://sites.google.com/site/pendlewitchtrail/

Medical professionals and health campaigners in Sheffield have set up a coronavirus track and trace scheme because of their frustration at government inaction.

How much longer will the referee control the game on the pitch?

FOOTBALL REWIND
By SIMON MULLOCK and MARK METCALF
IT is 129 years since the champions of England resided at Anfield for the first time.
And as Liverpool prepare to lift the Premier League trophy at the end of a season that has brought the introduction of VAR, it's ironic that the 1890-91 campaign was also shrouded in refereeing controversy.
That first Merseyside triumph, during the reign of Queen Victoria, belonged to Everton.
The Blues were the pioneers of the game in a city now synonymous around the world with football.
And they played at Anfield for seven years, until an attempt by chairman John Houlding to increase the rent on the ground he owned ended with Everton moving a mile across Stanley Park to Goodison.
Houlding took his revenge by setting up a rival club, Liverpool – and the rest is history.
This is Liverpool's 19th title, while Everton have nine. No City in England has more.
But the Toffees are the originals – and when they clinched the championship in March 1891 it was thanks to a remarkable chain of events linked to how football was refereed.
When the Blues lost their final game of the season 3-2 at Burnley, it seemed they had handed the crown to reigning champions Preston North End.
Preston had finished top in each of the first two years of the fledgling Football League and needed only to win at Sunderland to clinch a hat-trick of titles.
These were the days when clubs appointed their own umpires, each applying the laws of the game in opposite halves of the pitch.
A referee, positioned on the halfway line with a whistle, would be the final arbiter of all decisions.
But the sight of all three officials arguing with each other was commonplace.
And when Preston chairman and umpire Major William Sudell took exception to a decision made by referee Mr Cooper in the decisive game at the Wearsiders' Newcastle Road ground, he stormed off the pitch and refused to continue.
North End were already two goals behind and eventually lost 3-0 to a Sunderland team that finished seventh in their first season in the 12-team league.
The Newcastle-based newspaper The Journal reported: “One has not heard the last of Mr Sudell walking off the field and leaving his side without an umpire, for the referee Mr Cooper felt it keenly.
“A man of his experience should have thought twice before taking such a drastic action, especially as the referee's decision seemed correct.”
It was to be a watershed moment in how the laws of the game were applied.
In October 1890, in an experiment to see how officiating standards could be improved, the FA Cup tie between Gainsborough Trinity and Lincoln City saw referee Arthur Kingscott given complete control of the game.
It didn't go well, with Kingscott criticised for his inconsistent decisions and failure to send off a couple of Lincoln players for violent tackles.
But following the fall out from the events witnessed at Sunderland, the FA decided that appointing neutral referees and linesmen was the only way forward.
Even so, international games were refereed in the old style, with each country nominating their own linesman.
It wasn't until 1947 that the annual Home International clash between England and Scotland was refereed by a neutral official, with Frenchman Charles Delasalle helped by a linesman from each country.
More than 70 years later, each Premier League game requires no fewer than 10 officials following the advent of VAR.
The referee is aided at the stadium by two assistant referees, a fourth official, two additional assistant referees and a reserve additional referee.
In the VAR booth at Stockley Park, there is a VAR official and two assistant VAR officials.
And once again, it can be argued that the final decision no longer belongs to the man in the middle. 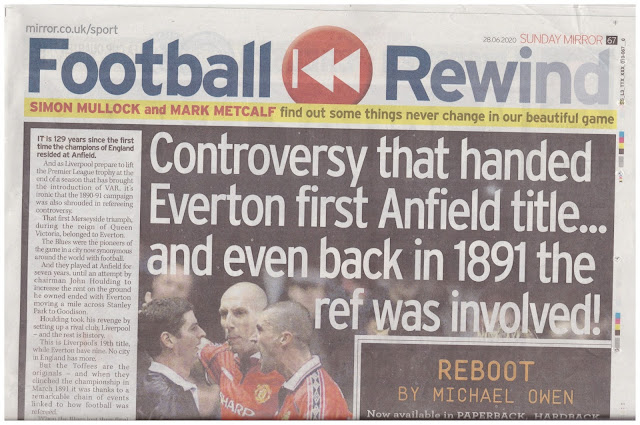 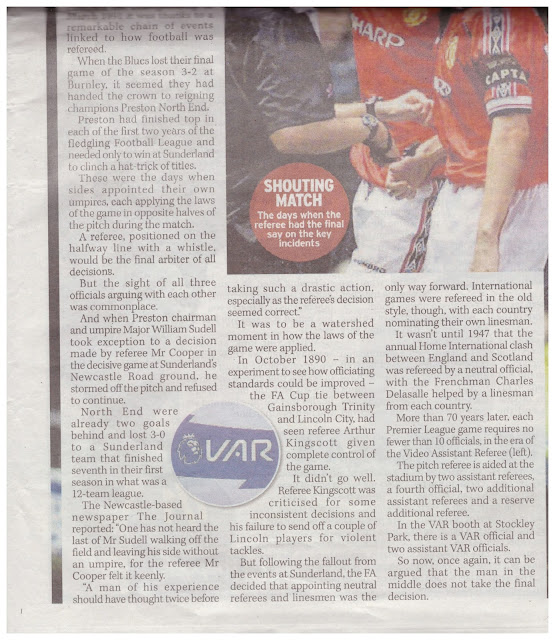 A small number of people will this Sunday gather on Holcombe Moor, Ramsbottom at the world’s oldest domestic violence commemoration site where Ellen Strange was murdered by her husband in January 1761.

Staying safe during COVID-19 has meant the annual Ellen Strange Memorial Day (ESMD) walk, which last year attracted 75 people of all ages, on the first Sunday in July has been cancelled.

But as the walk not only remembers Ellen Strange but also includes the reading out of the names of all Domestic Violence victims in the previous year then the organisers want to maintain this tradition that began in 2015. In 2020 the names of 123 victims will be read out; 117 are women and six men. Thousands of others suffer emotional and physical brutality.

The lockdown during COVID19 has also led, according to Linda Charnock of the Bolton based Endeavour Project, which provides support to keep people and their pets safe from domestic abuse and which is one of the ESMD organisers, reporting “a significant rise in the numbers of people needing help. Many people have been trapped at home with their abuser.”

Internationally, the UN has described the worldwide increase in domestic abuse as a ‘shadow pandemic” alongside COVID-19.

As in previous years a wreath will be laid to remember Ellen Strange and all domestic violence victims and there will be a small number of speeches. A minutes silence will be observed before the organisers make the 45 minute walk back down off the moor.

Martin McMulkin, a Bolton Councillor and Unite the union activist, said “it is disappointing that so few of us can make it on to the Moor but it is still important to remember Ellen and the domestic violence victims of last year.”

The organisers are now looking to host a local public meeting, hopefully at the Emmanuel Holcombe Church, close to 25 November - the International Day for the Elimination of Violence against Women.

At this event the soon to be released 10 minute professional documentary film on why Ellen Strange’s story from over 250 years is still relevant today will be shown.

To find out more about Ellen Strange (*) then download the booklet on her by local historian John Simpson at:- https://markwritecouk.files.wordpress.com/2018/10/ellen-strange-booklet.pdf

* Ellen Strange was murdered by her husband, John Broadley, on Holcombe Moor on 26 January 1761. When Ellen’s strangled and badly disfigured body was discovered her husband was arrested and indicted for her murder. At his trial a number of witnesses were called but as it was not the practice to write down such evidence we don’t know what they said. What we can be sure of is that their evidence was insufficient to convict Broadley. Forensic evidence had not yet been identified and the charged man pleaded not guilty. Almost certainly there were no eye witnesses to the attack.

Afterwards Ellen’s family and/or local people raised a pile of stones in her memory. This was called “Ellen Strange” on the first Ordnance Survey map in 1844-47. However, over time the true story became clouded in mystery until, in 1989, local author John Simpson published the results of his exhaustive research into events on the desolate moor over 200 years earlier.

The Unite Education Rebel Road project catalogues trade union and labour movement heroes who are publicly commemorated in the form of a plaque. When Bolton Trades Union Council were informed about the Ellen Strange story they obtained the backing of the Unite NW regional committee. £2000 was raised to republish Simpson’s book.