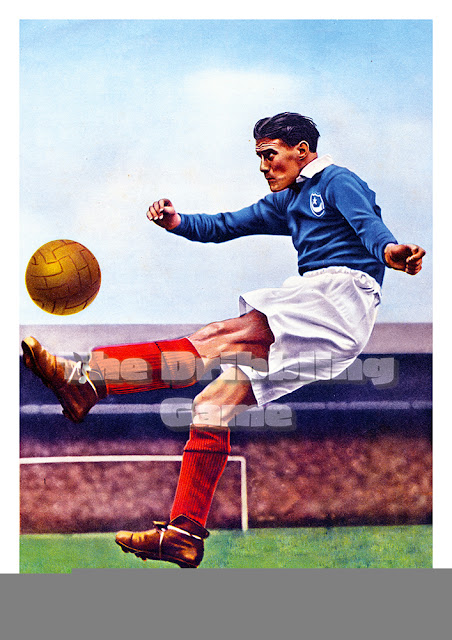 A loyal club servant who after a short spell as an amateur signed professional for Portsmouth in January 1944 but with conscription still being in place, Jimmy joined the navy, spending much of the rest of the war overseas.

When League football resumed in August 1946, Jimmy was part of the Portsmouth side that beat Blackburn Rovers 3-1 in a Division One (Premier League today) match. Pompey came twelfth at the end of the season. Jimmy established himself permanently at left-half in Jack Tinn’s side in the 1947-48 season in which Portsmouth rose to eighth in the table.

The following season — with new manager Bob Jackson in charge — saw the South Coast side roar to their first top flight title. All five regular forwards banged home at least ten League goals and Portsmouth won the title with 5 points more than runners-up Manchester United. Dickinson was highly efficient in reading the game, picking up the spare ball, breaking up attacks and keeping the forwards supplied with the ball. He played in every match during the season.

Portsmouth retained the title the following season when in the tightest of finishes they took top spot on goal average from Wolverhampton Wanderers. Pompey remained in Division One until relegation was suffered in 1958-59. Portsmouth even fell into the third tier for the 1961-62 season but were back in the Second Division for the final three seasons of Dickinson’s playing career. This came to an end on an emotional April 1965 day at already-promoted Northampton Town. Portsmouth scored with just four minutes of the match remaining with the point enabling Pompey to survive relegation. At the end of the game Dickinson was applauded by everyone present.

Dickinson made his debut for England in a 4-1 success in Oslo in 1949, the game that marked the end of Frank Swift’s international career. The Hampshire born player went on to make a further 47 appearances and twice - 1950 and 1954 - played in World Cup tournaments although England failed to make it beyond the quarter finals in either and there was the embarrassment of a 1-0 defeat against the USA in 1950.

Dickinson was briefly manager of Portsmouth in the 1970s but the financial hardship during this time affected him badly. Following a 1-1 draw at Barnsley he suffered a massive heart-attack and was forced to retire on doctor’s orders. He later died suddenly on 9 November 1982. He was just 57.

A proud man, Dickinson made 828 appearances for Portsmouth. Much loved by the vociferous Pompey fans it is only fitting that his face remains the image on the seats in the Fratton End.

To buy a copy of this print go to:-


http://thedribblinggame.com/1950s/jimmy-dickinson-portsmouth/
Posted by Mark at 01:56