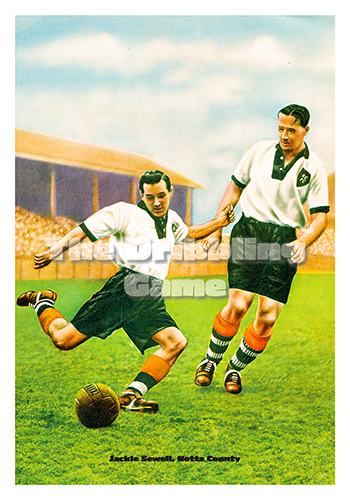 Sewell, who was born in Whitehaven and worked as a coal miner during WWII, was aged 17 when he signed for Notts County in October 1944 before turning professional in August 1945. He netted his first goal for ‘The Magpies’ against Norwich City in a 3-0 victory in a Division Three (South) match. He ended the season with 21 League goals.

Notts County competed the season in mid-table before stunning the football world by signing the England centre-forward Tommy Lawton from Chelsea in a British record deal of £20,000 in November 1947.

The new man’s arrival pushed County’s gates up to a record high over the season to 25,380 and Lawton’s new strike partner, Jackie Sewell, found his development greatly boosted by playing alongside the former Everton League winner. Lawton took Sewell under his wing and the pair developed a strong bond between them.

In the 1948-49 season, County, the oldest professional football club in the world, smashed in 102 goals, 15 more than champions Swansea. However they conceded 68, twice as many as the Welsh side and thus finished eleventh in the table. Despite the lowly finish the swashbuckling style of football adopted by Arthur Stollery’s side had the crowd’s flocking to County’s games and at Meadow Lane the average gate for the season rose to a new record high of 30,002.

Lawton and Sewell engaged in a good-natured duel to finish as top-scorer. In the game that season when Notts beat Newport County 11-1, Sewell, who already had four, was knocked, from behind as he soared to head home his fourth, by Lawton who then met a perfect Frank Broome cross to score his own fourth and stand there smiling. Despite this prank Sewell, a quick thinker and mover, outscored his illustrious colleague by notching 26 goals in total in 1948-49, six more than Lawton.

With Eric Houghton taking charge at Notts County in 1949-50, Lawton and Sewell helped spearhead a successful assault on the Division Three South title with the former scoring 32 and Sewell 19. Crowds at home rose to an average of 35,176. Promotion was clinched when Forest arrived on 22 April 1950. Lawton and Sewell sent their neighbours home beaten 2-0 before a 46,000 crowd. During the summer of 1950, Sewell was a star in the FA side that toured Canada.

Notts County survived in the Second Division in 1950-51 but the board decided to split up the successful strike partnership and they sold Jackie Sewell to Sheffield Wednesday in a new record British transfer fee of £35,000 in March 1951. Lawton left Meadow a year later.

In the 1951-52 season, Sewell scored 23 goals as the Owls won Division Two. He stayed for four seasons at Hillsborough where he scored 92 goals in 175 games. On his transfer to Aston Villa in December 1955 he did well and scored 40 goals in 145 games, one of which was a winning appearance in the 1957 FA Cup final against Manchester United. He later hit 9 goals for Hull City, taking his career total to almost 250 goals. Sewell played six times for England and scored three times, one of which was in the famous Hungary 6-3 victory at Wembley in 1953.

Sewell later became a coach in Rhodesia (Zimbabwe), Zambia and the Belgian Congo. (Congo) He died on 26 September 2016 in Nottingham.
Posted by Mark at 12:53