An important book that helps with the development of a potential economic programme to revive former industrial heartlands.

Peter Rowley has joined the increasing list of Unite members who have had published (*) a thought provoking book.  It is one that many people in former stable industrial heartlands will strongly identify with.

Peter Rowley’s extensive knowledge of the East Marsh in Grimsby stretches back to the late 60s when he undertook his teaching placement at the former Harold Secondary school before later becoming a teacher there.

East Marsh residents were heavily dependent on the local fishing industry for work, either working directly within the industry or in manufacturing or service establishments reliant on the trade.

Whilst wages were, even compared to nearby Hull, never the best the plentiful number of jobs — you could leave school on the Friday and be working on the Monday - meant the local community prided itself on being hard working, self sufficient and generously supportive of one another and in particular any of those who, for whatever reason, fell on hard times. Community spirit was strong and, yes, no one locked their doors.  It helped that there was also a network of public sector organisations and welfare benefits for anyone requiring assistance.

As the fishing industry — for many reasons — began to experience what has proven to be a permanent decline the mechanisms by which people supported one another began to fragment. Unsurprisingly, some people failed to make sense of their changed circumstances and began to despair about the future. Today, East Marsh has a strong drugs problem that the police seem reluctant to tackle with any serious intent.

Rowley reveals how local community leaders and their organisations have provided a practical focal point for extensive social activities that help retain local pride and provide practical support to one another. Particularly excellent has been vicar John Ellis and the project he helped set up in the early 70s, the Shalom Youth Centre, which, along with Your Place Community Church, will get all the profits from the sale of CLASS WORK, which costs just £7.95.

Alongside this micro analysis of economic decline and its human consequences, Peter offers a perceptive understanding of why things have become so difficult. He goes right back to the Heath Government of the early 70s. He shows that less than 30 years after the end of WWII the Tories, who by this time were no longer fearing the possibility that the working class might seek more revolutionary objectives, were determined to attack the social contract that ensured decent public services for all such as the NHS, good schooling and a secure welfare system.

By taking up the ideas of the Chicago school of economics, Margaret Thatcher - in conjunction with Ronald Reagan in the USA - then radically took forward the neoliberal project. At its core this comes down to letting the rich become ever richer whilst contending, with no evidence at any level, that everyone else will benefit from the ‘trickle down’ effect whereby money from the rich makes it way down to the bottom of the heap.

It is nonsense but the current Government remains firmly attached to such an idea. This means they have pushed the idea that being unemployed, even if you are sick and/or disabled, is an individual’s fault rather than the fault of an economic system that has failed to provide sufficient jobs.

More than 40 years later, Peter Rowley has interviewed many of the former pupils he worked with. Their stories are uplifting and they’ve got real grit. It’s clear that Rowley likes these people and he allows their working class voices to come through on the pages. This is much better than what appears as modern journalism in many papers when the working class are only occasionally featured on the pages.

The words of those interviewed contain some embryonic ideas for how best to economically regenerate the East Marsh and Grimsby in general. Rowley obviously wants to see these ideas further developed. As such he has interviewed in his book a number of people, such as Tony McLernon, who have run training programmes aimed at improving the unemployed — and particularly young people’s — skills and self confidence.

Peter has on occasions included in Class Work some of his own business and economic thoughts. I think he might have improved a very good book by offering a few more, especially as after a twenty year career in secondary and further education he set up his own company, Peter Rowley Limited.

Providing a fresh economic approach is vital if people and places like Grimsby are going to do better.

Peter is thus highly supportive of Jeremy Corbyn and John McDonnell’s plans to move away from neoliberalism if, after the next election, Labour becomes the next government. A People’s Quantitive Easing Programme would see money invested in infrastructure, job creation and high tech industries. Alongside this the Welfare State, the NHS and Education would be restored and supported. Some privatised industries will be taken back under state control.

Peter is a Labour Party member who is keen to help change ‘the course of history by a permanent transition in the balance of power in favour of the many not the few. To transform a system currently rigged against working people.’ Good for him and the more people who read this book the better as it will help in achieving such objectives. Tony is happy to speak at trade union branches and meetings about this book.  I think his appearance would make for some necessary discussions. Unite will be hosting a public meeting in Sheffield in early 2018 on this book.

BATTLE OF GRANGEMOUTH at http://www.unitetheunion.org/growing-our-union/education/bookofthemonth/may-2017/

Until the Curtain Falls: No Pasaran at http://www.unitetheunion.org/growing-our-union/education/bookofthemonth/june-2017/

From a Bended Knee to a New Republic at http://www.unitetheunion.org/growing-our-union/education/bookofthemonth/december-2016/

A Most Uncivil War at http://www.unitetheunion.org/growing-our-union/education/bookofthemonth/november-2016/

The Life and Times of a Baby Boomer at http://www.unitetheunion.org/growing-our-union/education/bookofthemonth/february-2016/ 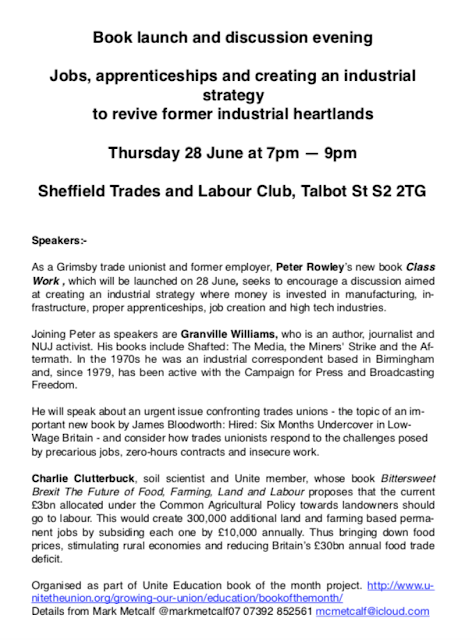