This is on Rebel Road at:- 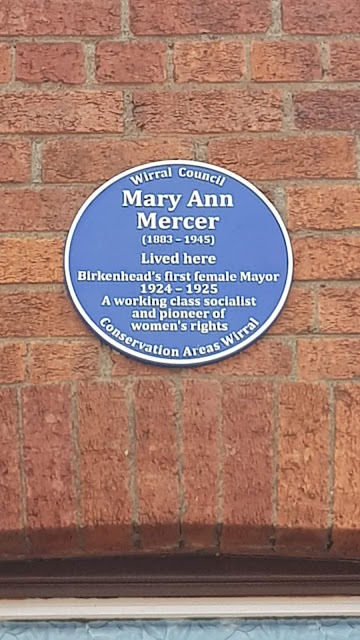 Shropshire Mary Ann Mercer (1883 - 1945) was Birkenhead’s first female Mayor in 1924-25. Her achievement - and record as a working class socialist and pioneer of women’s rights - has been honoured with a blue plaque at her home of 103 Norman Street in north Birkenhead.

The unveiling of the plaque was performed by Wirral Mayor Cllr Ann McLachlan, who had originally suggested honouring Mercer in such a public fashion, and Frank Field MP on Friday 11 May 2018.

Mary was only three when her father died. The subsequent struggles by her mother helped form Mary’s political views. She was to late become a passionate campaigner for state pensions for women.

After training as a nurse, Mary worked as a district visitor in Belfast, marrying a local labour activist and journalist, becoming interested in politics and joining the Labour Party.

Mary was elected as a Labour councillor for the Argyle ward in Birkenhead in 1919. She stayed a councillor until 1945 and by which time women had, following the passing of the 1928 Equal Franchise Act,  achieved the same voting rights as men.

In 1924, Mary Ann Mercer was made Birkenhead’s first woman Mayor – at the time she was also only the second Labour female mayor in the country.

According to Ann McLachlan “Mary Ann Mercer held lots of events in Birkenhead Town Hall for children, ensuring they were fed.

“She was a pioneer for women at a time when working class women were not usually in public life, and women generally did not have the vote.”

In 1935, Mercer  stood for Parliament and contested the Liberal-held Birkenhead East Division for Labour but was defeated, coming third behind the Liberal and Conservative candidates.

Mary Ann died on September 26, 1945, and Mercer Road in Bidston & St James Ward is named after her.  She was buried at Flaybrick Cemetery – where the epitaph on her grave says:

Many thanks to Unite member Luke Agnew of Birkenhead who sent in this photograph of the plaque and the relevant details. Luke is now working on finding out more about the Birkenhead dock disaster of 6 March that left 14 navvies died and three injured. The cause of this disaster was never definitively established and little information surrounding the event exists.

“The cemetery that I work at is where the 14 dead are buried in mass graves that are overgrown and I want to fix that and then get some headstone erected. It is the least those who died deserve,” explains Luke, who you can contact to help on 07792110973 or by email at lukeagnew@wirral.gov.uk