This was published by Roker Report in April 2018

Sunderland will travel to Fulham on Friday. Missing the action will be some of the Wearsiders’ most fervent fans of the last 40-50 years. They include a good number who were at Wembley in 1973 for the FA Cup final when the Sunderland number 9 was former Cottager Vic Halom, whose goal earlier in the competition against Manchester City in the FA Cup fifth round replay at Roker Park was one of the finest ever seen at the old ground during its 99 year history.

City were beaten 3-1 that night by a really good side that was backed by a passionate home crowd, who again turned out in force for the sixth round tie against another of Halom’s former clubs, Luton Town. The Hatters looked like they might hold on to earn a replay until late goals by Dave Watson and Ron Guthrie set up a first semi-final tie since 1956 for Sunderland.

The last four match took place at Hillsborough. It was Halom. who was born in Burton upon Trent, who struck Sunderland into an early lead when he forced the Gunners centre half Jeff Blockley into a mistake. When the ball ran free, Halom beat Arsenal keeper Bob Wilson to it and knocked it into the net in front of the massed ranks of Sunderland fans on the massive Hillsborough Kop.

Halom’s strike partner Billy Hughes added the second at the Leppings Lane End in the second half. Despite a late Charlie George goal it was Sunderland, a Second Division side, who went through to Wembley to face Leeds United.

I won’t dwell on what happened on 5 May 1973 except to say that Sunderland deservedly beat the West Yorkshire side with a single Ian Porterfield goal. Halom had a fine game, keeping the Leeds defence constantly under pressure and holding up the ball to bring other players into the match. He might even have scored late on.

The following season, 1973-74, Halom played two of his finest games in a lengthy, successful career in which he made 435 Football League appearances for and scored 131 goals. These were the second round League Cup replay at Roker Park against Derby County, which finished 1-1, and the second replay in which he scored three goals as the Rams left beaten 3-0. Halom ran former Sunderland defender Colin Todd and his international colleague Roy McFarland ragged. Little wonder that Vic Halom became a cult hero with many Sunderland supporters.

In the 1975-76 promotion season that ended Sunderland’s six year spell in Division Two, Halom found himself replaced up front by Mel Holden and he scored his final Sunderland goals when he hit two against Nottingham Forest in a 3-0 victory at Roker Park on 8 November 1976. When he left in the summer for Oldham Athletic he had made 130 first team starts, plus 4 appearances as a substitute,  scoring 40 goals.

One man who saw the majority of Vic Halom’s games was fanatical Sunderland fan John Bottomley, who lives in Chester, and who on 5 June 1996 in San Francisco married Catherine, who in turn became a follower of the Lads and was a season ticket holder in the North Stand for many years.

Catherine was the regular driver on the Saturday morning trips to home games from Chester to Sunderland, where the pair would book in to their regular B&B on Roker Terrace in Seaburn for the night, before enjoying the sea view and a few pints at the nearby Roker Hotel and various other local pubs.

Catherine also joined John in attending many away matches. Her first Sunderland match was, in fact, a 0-0 draw at Oldham on 14 January 1995. It was Steve Agnew's Sunderland debut. Catherine was somewhat mystified as to how us regulars were celebrating a great result when it finished 0-0.

Sadly, Catherine has, after a long illness, died. Her funeral is this Friday afternoon in Chester and I will, like many other Sunderland fans, be there to remember a really lovely woman and also to show John that we share some of his grief and will support him during this terribly difficult time in his life. A large number of people from places far and wide will honour Catherine’s memory by attending. John and Catherine enjoyed many trips abroad and actually met whilst on holiday in America in 1994. They enjoyed a long, loving relationship.

Catherine was born in Epping on 2 March 1955 and met John when she was working in Cambridge in 1994. She worked all her life in the health sector, mainly in the NHS, and was very proud of having trained at the London Hospital in 1972-73. When she moved to Chester she began working as a recovery sister at the Countess of Chester Hospital, which, sadly, was where she also died on March 29.

Catherine’s two favourite Sunderland players were Kevin Ball and Niall Quinn, who when she worked at the Evelyn Hospital in Cambridge, was amongst a number of high profile footballers who were patients.

Years later Catherine and John were joined in the Clarendon Hotel on the Banks of the Wear by the Sunderland then chairman - who was with members of the Drumaville consortium. Niall Quinn was delighted to Catherine.  Over a few beers, Quinny praised Catherine and all the other hospital staff who had helped save his career when he was forced to undergo a series of operations on a serious knee ligament injury. Niall and Catherine, who both liked a glass of ale or two, had a real laugh together.

Catherine’s last Sunderland match was against one of Quinny’s former clubs, Manchester City, at the 2014 League Cup Final.

Mark Metcalf, who will miss his first Sunderland game since 20 October 1973 at Craven Cottage, which is his favourite away ground. 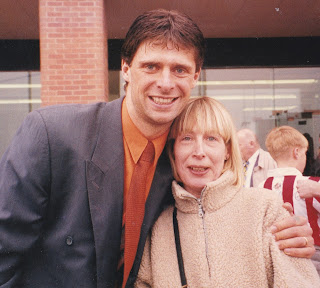 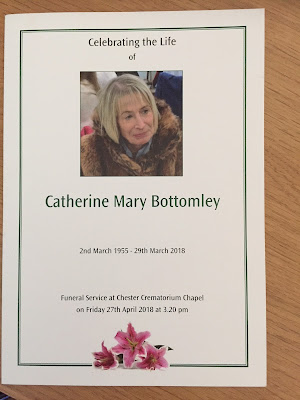 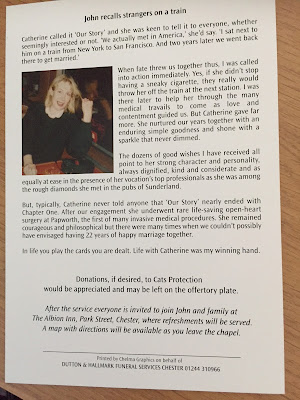