Want to contribute to documentary production of Fred Spiksley's story?

For anyone who’s interested in contributing to the documentary production of the remarkable story of Fred Spiksley and the formation of football itself - whether that be via financial support in return for your name/brand in the credits, PR, editorial contribution, or otherwise - please get in touch with Project Manager Rich Stonehouse at rich@richstonehouse.co.uk.


www.linkedin.com/in/richstonehouse
Posted by Mark at 01:29 No comments:

Research probes links with child mortality
The publication dates of two major studies into unexpected deaths in infancy remain unclear.
It is 14 years since Public Health England (PHE) first promised a study on the impact of municipal waste incinerators (MWI). Led by researchers at Imperial College London it eventually began in 2011. Preliminary results were envisaged in 2014 but in 2015 PHE announced they were likely to be released in early 2016. There was then a further delay.
MWIs burn municipal solid waste, including hazardous substances, to convert it into ash, flue gas and heat to be used to generate electricity. Incineration causes emissions that may pollute the air, water and soil and have harmful impacts on the environment and animal health.
The PHE study has examined 22 MWIs, including those at Bolton, Grimsby and Kirklees – districts
where infant mortality rates are higher than regional or national averages.
In the second study, the Lullaby Trust, which aims to prevent unexpected infant deaths, funded Birmingham University in 2012 to research the role of ambient air pollution in Sudden Infant Death Syndrome (SIDS) mortality. The study’s initial findings in 2015 indicated “ambient air pollutants were associated with increased SIDS mortality”.
Air pollution
The Office for National Statistics (ONS) has found that mortality rates are highest among groups in routine and manual occupations, indicating that deprivation is the main reason behind infant mortality. Other factors cited are poor parenting and cultural practices. But the results of both reports are eagerly awaited by Shrewsbury’s Michael Ryan, who first became concerned about air pollution when he lost two of his children, one at 14 weeks, and considered their deaths could be related to having lived downwind of an incinerator.
When he examined London wards around MWIs he found that, even in affluent areas such as Chingford Green in Waltham Forest near the Edmonton incinerator, death rates were above average.
In Bolton five of the top six wards with the highest infant mortality rates border the incinerator in Great Lever.
Ryan’s research is supported by a study in Japan in 2004, which found “a decline in risk from distance from MWIs for infant deaths”.
Ryan’s research, reported by Big Issue North, was significant in forcing PHE into conducting its delayed study.
In an almost exact repeat of its statement from last year, Dr Ovnair Sepai from PHE’s toxicology department said: “The unanticipated complexity in gathering data has delayed the project. It means that papers from the work will be submitted by SAHSU to peer reviewed journals in spring 2017. It is likely to be a few months after submission for the papers to be published.”
He stressed that the PHE continues to believe that MWIs are not a significant risk to public health.
Local campaigns
Meanwhile, there has been no progress since last year when Lullaby Trust said its study has been submitted for publication to the Scientific Reports journal and if accepted “will be published online at some point this year”.
A trust spokesperson said: “Once the research has been published we look forward to sharing it publicly.”
The delay in the release of both reports comes when there are growing local campaigns against planned new incinerators. A public meeting in Sowerby Bridge last month, attended by both local MPs, drew a large crowd concerned about plans by Calder Valley Skip Hire to construct two incinerators.
On the same day around 1,000 people marched in Keighley to oppose plans for an incinerator at Marley. Sarah Nash from Aire Valley Against Incineration, said: “This plan is completely unnecessary, inappropriately sited and damaging to the environment, health and the local economy.
“There appears to be a complete lack of scrutiny. It seems that everything the developers present is accepted as fact whereas our well researched and evidenced arguments are dismissed as groundless. We are raising funds for a judicial review.”
There is also cross-party support against a planned incinerator in Hoddesdon in Hertfordshire. 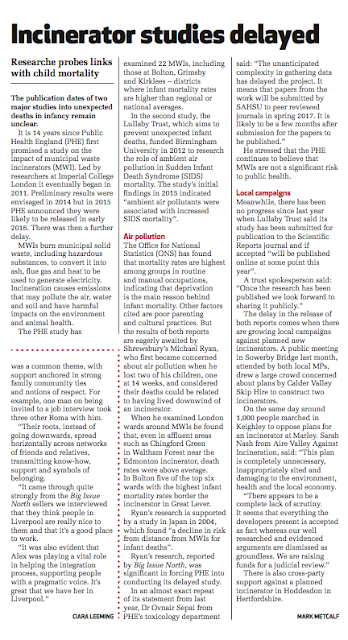 Mr. Jeremy Corbyn (Islington, North)
May I draw the Leader of the House's attention to early-day motion 868 concerning the problems facing the Kurdish people in Iraq?
[That this House is alarmed at the continuing persecution of Kurdish people in Iraq; records its horror at the way all Kurdish people have been treated in their struggle for a Kurdish nation; demands that Her Majesty's Government request the United Nations to send an independent mission to Iraq to seek safeguards for the Kurdish people and that the International Red Cross be requested to send essential supplies to save the lives of Kurdish people in Iraq.]
Can he find time for a debate on foreign affairs when such matters can be raised, but, in the meantime, will he communicate urgently to the Foreign Secretary and the Prime Minister the need to put pressure on the United Nations to send a team of observers to Iraq to see what has happened there and on the International Red Cross to send urgent medical supplies?
Is the right hon. Gentleman aware that today the Committee of Kurdish Organisations in Britain has delivered a letter to the Prime Minister pointing out that already 21,000 have died in Halabja following cyanide and other chemical weapon attacks on the town by the Government of Iraq? The very least that the British Government should, indeed must, do is to demand an end to all chemical warfare and an end to the attacks on the Kurdish people and put pressure on all international agencies to bring urgent humanitarian relief to end the tragic loss of life.