SUPPORT FOR DETAINED MANCHESTER GRADUATE
Osman Kavala held after a failed coup
Prominent Umist alumni speak out
Big Issue North 28 May - 3 June
Two prominent students from the former University of Manchester (UM) are supporting a colleague who has been jailed in Turkey’s crackdown following a failed coup.
Osman Kavala, who was imprisoned last October but has yet to be charged of any offences, studied economics at UM in the 1970s. He has been accused of “attempting to prevent the government from fulfilling its duties” and of being connected with foreign persons and terrorist organisations, and is being held in the high-security Silivri prison in Istanbul.
But John Mann, Labour MP for Bassetlaw, who was one of Kavala’s friends in Manchester, instead praised Kavala for “promoting an open and democratic Turkey”.
Philanthropic acts
Mann has used early day motions and questions in Parliament to request the British government to “take steps to seek the release of Kavala from prison”.
In 1982, Kavala’s father died and he took over the running of the family-owned business. Among his philanthropic acts were the donation of a coal mine to its workers and investment in a new children’s hospital in Istanbul. He also opened cultural centres in Turkey’s less developed regions.
In July 2016, an attempted coup in Turkey against state institutions and President Erdogan by a faction within the armed forces was defeated by forces loyal to the state. Coup leaders were accused
of being linked to the Gulen movement – which is led by the US-based Turkish businessman Fethullah Gulen – and is designated by Turkey as a terrorist organisation.
Mass arrests followed and over 300 people were killed. Some 50,000 people have been arrested and more than 150,000 dismissed from their jobs after being accused of Gulen connections. Some countries such as Germany have expressed doubts that the organisation was behind the coup. But the UK government has designated the Gulen movement as terrorist and Theresa May recently met President Erdogan on an official visit to Britain.
Since Kavala’s arrest in October, family and friends have been campaigning.
“Importance of tolerance”
“UM was full of interesting characters when I studied economics there from 1977 to 1980 and I became firm friends with Osman,” said civil rights activist and senior law lecturer at the University of Manchester Graham Smith.
“Osman is one of those like Nelson Mandela and Mahatma Gandhi who just see good in people. I visited him in Istanbul in 1981. He was attempting to get the Turkish state to acknowledge its debt to the Kurds and Armenians. He was stressing the importance of tolerance and multiculturalism.
“Osman uses art and culture to bring together different communities, including minorities.”
Kavala’s friends from Manchester included the late Zafir Yab Ahmed, who fled Pakistan in the late 1990s after the government filed sedition charges against him for shining the spotlight
for children working in the carpet industry. A personal intervention by Bill Clinton allowed Ahmed to live in the US until his death in 2005.
Kavala was also associated with Indian environmental and human rights campaigner Mohit Ray and the late social anthropologist David Webster, a UM lecturer at the time.
Webster was assassinated outside his Johannesburg home by the South African apartheid regime in 1989. The subsequent black-led demonstration that accompanied his coffin into the cemetery at St Mary’s Cathedral is regarded as marking a revival in the fortunes of the African National Congress, paving the way for the fall of apartheid.
Detained without charge
In March, Kavala was allowed to receive mail.
“I have written and requested him to invite me to visit the prison,” said Smith, who is also a consultant on human rights to the Council of Europe. “His lawyers can only see him when there is a guard listening next to them.
“Relatives can visit for one hour a week and must talk using a phone with glass in between. This contravenes article 8 of the European Convention on Human Rights on family life.
“Keeping someone detained for so long without charging them appears to be a form
of punishment. He should either be charged soon or be released.”
In response to Mann, Foreign Office minister Sir Alan Duncan told the House of Commons that
his department preferred to “encourage Turkey to work towards the full protection of human rights, particularly on freedom of expression... but has not taken action directly relating to Osman Kavala’s case.”
The Turkish Embassy did not respond to Big Issue North’s request for comment. 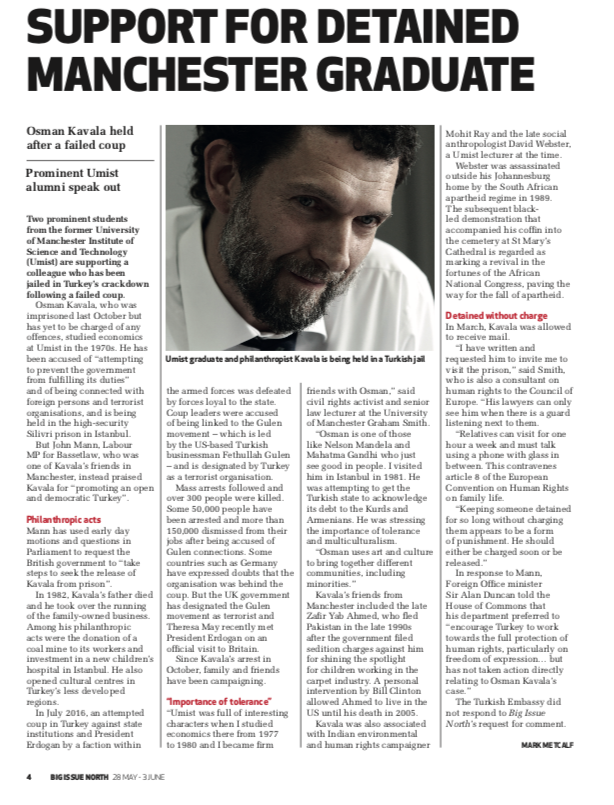