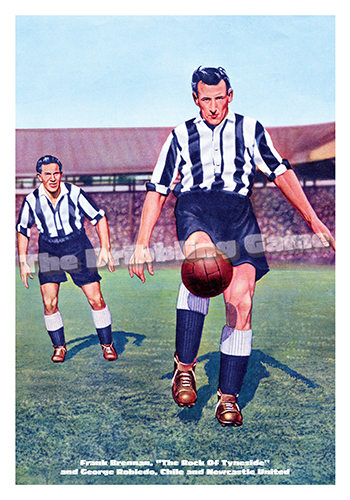 Brennan, a Scottish international, is one of Newcastle United’s greatest ever defenders. He was known as the ‘Rock of Tyneside’ and was adored by the St James Park faithful. At 6’3” he towered over many opposing centre-forwards and for such a big man he was also remarkably quick over the ground and could perform a sliding tackle with perfection.

Newcastle paid Airdrieonians £7,000 to sign the centre-half in May 1946 and the 22-year old made his debut against Millwall in a Second Division game on 31-08-1946. Newcastle reached the FA Cup semi-final in the 1946/47 season but were easily beaten by eventual winners Charlton Athletic.

In the 1947/48 season, Newcastle, backed by their highest ever average gate of 56,299, won promotion back to Division One. Three seasons later the Magpies won the FA Cup for the fourth time when two goals from Jackie Milburn saw Blackpool beaten 2-0 in the final at Wembley. Brennan had a fine game with England international Stanley Mortensen rarely getting chance to shine for the Tangerines.

The Tynesiders were back at Wembley the following season to become the first side since Blackburn Rovers in 1890 and 1891 to win the FA Cup in consecutive seasons. Newcastle beat Arsenal 1-0, the late winner coming from Chilean George Robledo.

The Black and Whites returned to Wembley to again win the FA Cup in 1955 but by this time Brennan was in dispute with the club. The affair led to protest meetings and his departure from the club in March 1956. Brennan later travelled the world as a coach for the British Council. He was manager when North Shields captured the 1969 FA Amateur Cup by beating Sutton United 2-1 in the final at Wembley. Frank later ran a successful sports outfitters business close to St James Park.