Review of FROM BENDED KNEE TO A NEW REPUBLIC: How the Fight for Water is Changing Ireland

FROM BENDED KNEE TO A NEW REPUBLIC: How the Fight for Water is Changing Ireland

This is a very easy to read, highly informative book by Brendan Ogle, the Unite education, politics and development organiser for Ireland.

The Right2Water and Right2Change campaigns have proven —  thanks to a unique blend of community, trade union and political activism — to be massive successes. Ogle has played a major role and in this book he explains why the campaigns — which started in 2014 and are ongoing — are necessary and how they have changed the face of politics in Ireland, hopefully for good.

The people of the Irish Republic have been forced to endure austerity for many years. The Right2Water campaign began after the painful journey, backed by the EU, towards water privatisation started when water meters began to be installed by Irish Water. The Irish Government had created this company in 2013 with the aim of getting Irish citizens to now pay privately for their water rather than had previously been the case collectively through their taxes.

Ogle begins by making a very powerful case as to why the Right2Water campaign could easily have been one for either health or housing, areas where the private sector has been politically allowed to dominate the public sector with disastrous consequences for working people.

The author then shows how the supply of water is being privatised right across the globe. This includes the UK where water companies have upped prices and are now enjoying massive profits and yet pay hardly any tax and are also putting little investment into the infrastructure needed to supply water to customers. Ogle shows how international companies are seeking new water avenues to explore, thus making the future even more worrying.

The Irish Republic has largely been dominated politically by centrist parties such as Fine Gael and Fianna Fail.  Corruption has flourished. Trade unionists and (some) socialists who longed for a better future have tended to look towards the Irish Labour Party, but like in Britain it has become increasingly social democratic rather democratic socialist, more Blair than Attlee.

Ogle deconstructs the Irish Labour Party, showing how its politics are the mirror image of New Labour whereby neoliberalism and globalisation is good even if it wrecks working-class communities. As such Irish Labour, with 37 seats, was content to enter into a coalition government with Fine Gael in 2011. The party did its best to undermine the two campaigns and was to lose heavily at the General Election in 2016 and was reduced to just 7 seats.

With virtually all of the mainstream media either hostile or uninterested in the ever increasing numbers of people getting involved in the Right2Water campaign, Ogle shows how social media can be very important in reaching out and bringing on board all sectors of the community.

When large scale mobilisations meant they could no longer ignore what was happening, the Irish State and its mainstream politicians then attempted to portray the developing movement as a threat to the State. This was despite the fact that all the protests, many of which have been massive,  had, with some small exceptions, been peaceful ones.

Ogle bemoans the lack of an impartial and informed media in Ireland and also the lack of a functioning democracy such that there is no right to recall MPs when they fail to carry out promises they have made during General Elections. One of the great parts of the book is that it shows how the campaign in Ireland has linked up with similar water campaigns right across the world and particularly those in Detroit in the USA and in Greece.

The book shows how Unite, in particular, and some sections of the trade union movement have been at the forefront of the fight against water privatisation.

The book describes how Unite, working with Trademark Belfast, has provided political economy courses for non-aligned community activists. This has given the water protest movement access to the type of information that would enable them to understand the political and economic agenda behind water privatisation.

In 2015, the Right2Water campaign undertook a period of reflection and analysis and this led to the development of a more ambitious platform called Right2Change. Ten policies, all of which were only agreed after extensive debate in which political parties, trade unions and community activists were represented —  are listed. They are: a right to water, jobs, housing, health, education, democratic reform, debt justice, equality, a sustainable environment and a fair economy. With 37 per cent of its citizens suffering deprivation, an unemployment rate of over ten power cent and thousands driven abroad they were all necessary.

To prove the ten points are also affordable, Right2Change provided a rigorous, detailed economic explanation of where funds can be founded in a country where major multinational companies such as Apple pay a fraction of their huge profits in tax.

Right2Change then sought to get political parties to agree to back these policies at the 2016 February General Election. In constituencies where candidates refused, attempts were made to get community activists who did back the policies to stand for office. 106 election candidates endorsed Right2Change. None were from the Labour Party.

Almost 100 of the 158 seats were won by candidates who had campaigned on an anti-water charges platform. For the first time ever in modern Irish politics a majority Government could not be formed. The key outgoing government initiative of wanting to cut taxation was rejected by voters more concerned with the state of essential public services.

Fine Gael is now the senior partner in a coalition government that is supported by Fianna Fail, who have promised not to bring the government down in confidence motions or object to reshuffles.

Water charges have been suspended until the end of 2016 and the government has also set up a hand-picked  ‘independent commission,’ which is excluded from assessing the social impact in relation to how Ireland provides water to its citizens. Yet even this was insufficient for the European Commission as just four days after the UK voted to leave the EU a spokesman for the Commission confirmed that Ireland would be fined if domestic water charges were not reinstated. Such an ill-judged and ludicrous statement — in a country that has 1 per cent of the EU’s population and has been saddled with 41 per cent of its banking debate — must inevitably make an Irish exit from the EU more likely in the future. Ogle questions ‘whether the relationship that Ireland has with the EU as currently structured can be sustained.’

Right2Water has made a lengthy submission to the Water Commission calling for water meters to be scrapped, water to again become paid for through general taxes and how water charges infringe human rights. It wants the Dail (Irish Parliament) to abolish domestic water charges.

A decision must be made shortly. Meanwhile Ogle isn't sitting back waiting and ends his book asking ‘So Where Will Our Progressive Government Come From?’ and like everything else in this excellent book the author offers some great analysis and ideas that have wide international significance.

www.theliffeypress.com
Posted by Mark at 07:29 No comments:

What are commentators saying about FLYING OVER AN OLIVE GROVE? 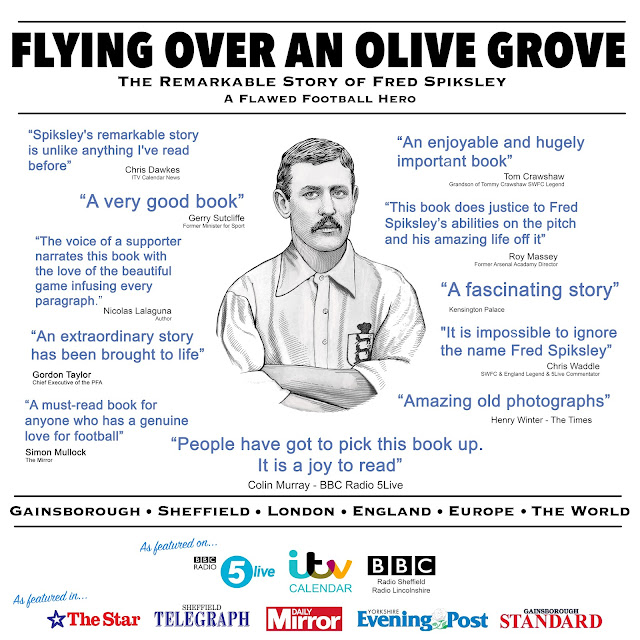 Coverage of plaque unveiling in Bolton to commemorate Kenny Davenport.

On 22 November 2016 I was delighted to help unveil in Bolton a plaque to commemorate Kenny Davenport’s achievement in scoring the first ever League goal.

https://www.youtube.com/watch?v=X5la-Z259aI&feature=share
Posted by Mark at 02:26 No comments:

A plaque commemorating the first ever Football League goalscorer Kenny Davenport is to be unveiled in the Pikes Lane area of Bolton next Tuesday.

For over a century, it had been thought that an own goal by Aston Villa’s Gershom Cox, playing against Wolverhampton Wanderers, was the first Football League goal.
In 2013, however, research by football author Mark Metcalf and librarian Robert Boyling revealed that the kick off in that game had been delayed.

It meant that Davenport’s goal at 3.47pm on September 8, 1888 for Bolton Wanderers against Derby County was the first ever Football League goal.

Efforts to find a permanent home in the Pikes Lane area for a blue plaque dedicated to Davenport have now led a local business, the Lostock Electrical Projects Company, agreeing to have the plaque on their building on Backfield Street. Business owner Duncan Simm, 58, is a Wanderers fan.
Gordon Taylor OBE  said: "For a Bolton Wanderers player, Kenny Davenport, to be discovered to have scored the very first goal in the oldest established professional football league in the World is rightfully worthy of a very special commemoration and this, thanks to Mark Metcalf, Kenny's family, the PFA and Bolton Wanderers F.C, has now been successfully achieved.”

Shaun Harvey, EFL Chief Executive, said: “I am pleased to see that a plaque is to be unveiled in recognition of Kenny Davenport’s first goal in league football.

“While there has since been over half a million goals in English league football, there can only ever be one ‘first goal’ scored and it is it fitting that such a momentous moment is marked in this way.”

Phil Mason, Club Chaplain, added: “I am delighted that we are marking this significant milestone in our history as a club and rightly commemorating Kenny’s achievement. My thanks must go to all involved in discovering this fact of history and especially to Mark Metcalf. The Blue Plaque will act as a permanent reminder of the importance of our Club in the history of football”.

Mark Metcalf said: “Robert and myself are delighted that the efforts of many people to find a suitable venue to erect a plaque commemorating Kenny Davenport’s feat will be rewarded on 22 November. I am looking forward to the event.”

Duncan Simm added: “When myself and my business partner were asked if the plaque could be placed here then we had no problems in agreeing especially as I am a Wanderers season ticket holder.  We are thinking about putting a letterhead on our documents stating that we are based where the first goal was scored.”

Mavis Callaghan, who is Kenny Davenport’s great niece, said: ““We have been searching for a venue since 2013 and so it will be great to see the plaque being unveiled on 22 November. Bolton scored the first League goal and also the first at Wembley in 1923. That’s a great record and it is only right that Kenny is remembered for having scored the goal on 8 September 1888. He was also the first Bolton player to play for England.”

The plaque is to be unveiled at 5.30pm on Tuesday 22 November by Gordon Taylor of the PFA, Mark Metcalf and the Mayor of Bolton, Lynda Byrne.
The ceremony is to be overseen by the Club Chaplain and Head of the Community Trust, Phil Mason and everyone is invited to attend.
Ends