How rural workers' revolts made trade union heroes - like Arch

How rural workers’ revolts made trade union heroes - like Arch

‘Kill all the Gentlemen’ Class struggle and change in the English countryside
Martin Empson
£14.99

This February 12 marked the hundredth anniversary of the death of Joseph Arch. So it is great that he features prominently in this fascinating account of the historic class struggles waged over many centuries across the English countryside.

The 1381 Peasants’ Revolt had numerous causes. It was triggered by the ruling class attempting to pay for an expensive war in France by collecting unpaid poll taxes.

The ongoing desire by agricultural labourers for radical change could though not be stilled forever. Empson examines Jack Cade’s 1450 revolt, Kett’s Rebellion in 1549 and ongoing struggles against enclosures that deprived the poor of common land on which to fatten their  livestock.

The 1830 Captain Swing movement destroyed the threshing machines that were sweeping away agricultural workers jobs. Attempts at unionisation were crushed in 1834 when six landless labourers at Tolpuddle were caught trying to organise a union and transported.

By 1872 discontent at poverty wage levels was rife amongst agricultural labourers. In Joseph Arch there was a man whose oratory and organising skills could, at last, create an organisation that embodied the hopes of the unorganised, rural poor. It helped that Arch owned his own cottage and was almost guaranteed work as he was a very skilled hedgecutter.

In 1872 Arch was approached by a group of men looking to form a farm workers' union. He agreed to help. On 7 February 1872, 2,000 labourers gathered to hear him in the village of Wellsbourne, Warwickshire. Similar events elsewhere drew massive crowds. On 29 May 1872, the National Agricultural Labourers’ Union was established. Arch was elected full-time President.

By 1874 the union exceeded 86,000 members, over one-tenth of the farm work force. Wages everywhere were forced up before the farmers imposed a lockout of labourers and drove conditions back down. Some of the best union militants were forced to join the thousands who migrated overseas.

The episode had though shown that trade unionism could be extended into the countryside. Arch later became the first agricultural labourer to be elected as a MP, serving as a Liberal between 1885 and 1900.

To buy a copy:- https://bookmarksbookshop.co.uk/view/46096/%2527Kill+all+the+Gentlemen%2527+Class+struggle+and+change+in+the+English+countryside 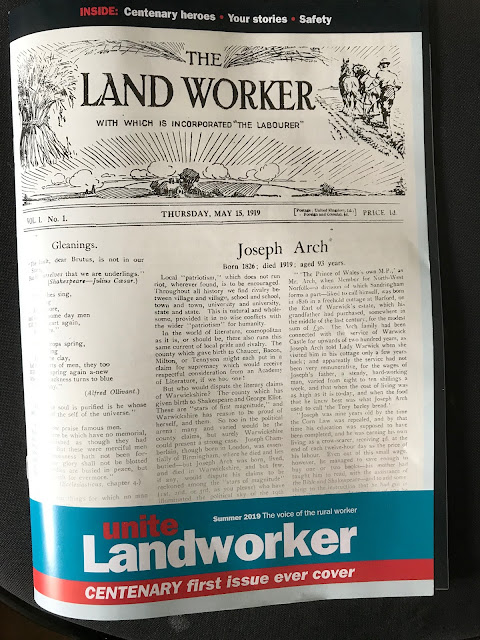 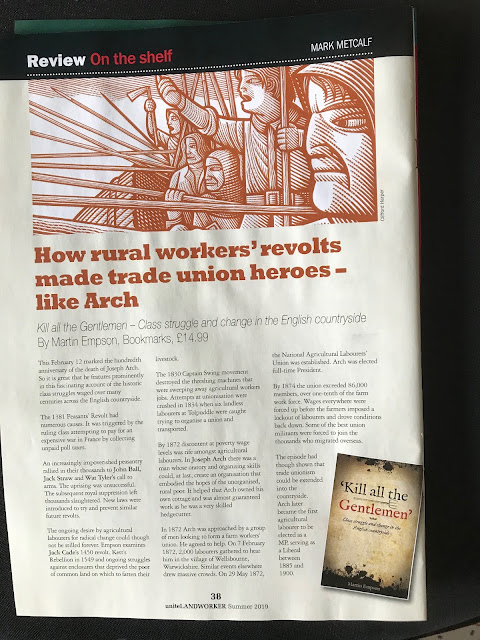