A contract forestry worker Lesley Whitfield, aged 42, died on 28 November 2018, in an incident involving a quad bike in forestry near Castle Douglas.

The tragedy occurred little over a year since Unite Forestry Commission lead rep Neil Grieve expressed concern in the Landworker summer 2017 edition that in Scotland: “Private companies are doing some of the harvesting, road repairs and replanting. This could reduce the direct workplace and we are aware that, just like in Wales, the employees are not enjoying decent terms and conditions.

“They are being exploited by being employed on zero-hours contracts. For the first time in my 30 year career I have seen planting contractors who are living in tents in the forests.”

Asked to comment on whether Neil’s fear had now been confirmed, Forest Enterprise Scotland, which is responsible for managing the National Forest Estate in Scotland, and the HSE both said that whilst investigations, for which Police Scotland have primacy, were ongoing they could not comment. A FES spokesperson said they “would like to offer our deepest condolences to the family and friends at this difficult time.”

The police will conduct a post-post-mortem examination and submit a report to the Procurator Fiscal, which is responsible for the prosecution of crime in Scotland.

Lesley Whitfield’s death was the latest in a long list of 2018/19 countryside fatalities, which totalled 15 in the agricultural sector by 24 September 2018. This was just under a quarter of the overall total of 61, 16 of which were in Scotland. Of the 15, a third were employees and of the remaining ten that were classed as self employed the majority were working for someone else when they lost their lives. A third of the fifteen, were like Lesley Whitfield, killed in an incident involving a vehicle.

Landworker will let readers know of development on this case as it progresses. 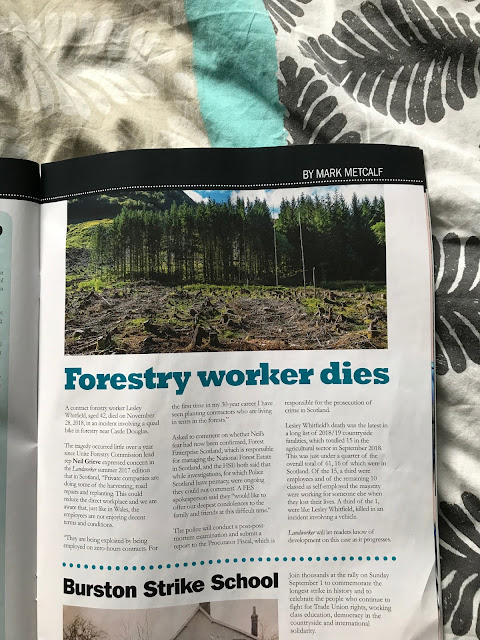