Unite reps at the Forestry Commission in Scotland and England veto centenary celebrations as Commission splits.

The Forestry Commission was set up in 1919 to expand Britain’s forest and woodlands after depletion during WWI. It did just that, raising Britain’s forest cover over the next 70 years from 5 to 12 per cent.

It meant that when an attempt was made in 2010 by the Tories to privatise the organisation that manages some of Britain’s most spectacular landscapes, provides outdoor recreation facilities and harvests timber to supply domestic industry, there were wide scale public and trade union protests that forced a climbdown.

Yet even though it’s now a hundred years old there has been no celebration amongst Unite reps. Because on 1 April the once proud body that was until 2013 responsible for forestry in Wales, Scotland and England has been reduced to three national organisations after Scotland and England separated, six years after Wales went its own way and became Natural Resource Wales.

Two new bodies - Scottish Forestry and Forestry and Land Scotland - have been established in Scotland. These bodies report to the devolved Scottish Government at Holyrood where back in 2009 the ruling SNP, which had quietly sold off a number of forests when they became the ruling party two years earlier, announced plans to lease off a quarter of forestry land to private companies for 75 years. Trade union and public opposition forced an SNP climbdown.

Unite senior steward in Scotland, Neil Grieve, wants to “build on the working relationship we have already developed with the Scottish Government. I am though concerned as most our funding comes in a block grant from Westminster, and the Tories have, since 2010, steadily reduced the amount going to the FC everywhere.

“This has led to considerable job losses and pay scales being eroded such that there is a wide variety of salaries for employees doing the same job.”

Neil also highlighted how the Scottish FC has employed contractors in Scotland’s remote forests and how they have housed them in caravans. Little wonder then the champagne remains firmly on ice.

Prior to the new structures the FC managed around 1.7 million acres and of which 70% was in Scotland where timber production brings in much needed revenue. Grieve is concerned about the future of the FC in England.

“England is more about conservation and recreational parks. I believe some Tories may try and persuade the electorate that the FC is uneconomic, which was the grounds used by the Thatcher government to sell off forests in the 80s.” It costs just over 40p annually for each of us to fund the FC.

Grieve’s concerns are echoed by George Whitcher, the Unite rep in the New Forest and who has worked for the FC for 40 years. His lifetime of devotions mirrors that of  his grandfather, George, who was an employee for many decades and his father,  James, who was an FC tree cutter for 49 years.

George is currently a forest craftsman but for before that he was for many years a tree cutter, which he much preferred, a post that following Tory cuts since 2010 is increasingly undertaken by contractors that have few rights and are poorly paid.

“I like being in the forest away from factory or office work. Many of my fellow workers have long service and also enjoy working outdoors. It’s a way of life and they really care for the forest and its habitat. My fear is that in the long term the FC in England will slowly be taken out from under the public umbrella and this will lead to more and more contractors replacing those who are devoted to maintaining the forest at a very high standard.”

George has been an elected TGWU and then Unite rep for over two decades. He is full of praise for the work that Neil Grieve did as Unite lead rep in England and Scotland between 2014 and 2019. “Really we now need someone in England to come forward and take on what Neil was doing. We need many more reps overall and more engagement by members, whose current pay and conditions will clearly be eroded unless they do get active. The union is you.”

George, 63, is currently fighting a battle on behalf of those he represents who live in FC tied accommodation within the New Forest. “The FC wants to get the cottages to reach market rents of over £18k annually. This would make them unaffordable. I pay £635 a month rent and which is very favourable for this area but my wages are £21,000 gross. “

When FC cottages now become available the organisation is asking staff to bid for them with whoever offers the most winning out. “Front line staff inevitably lose out. It happened recently with someone in his late 40s and he has been forced to moved back in with his parents,” explained George.

“I have raised this issue wherever I can including with many MPs. I did manage at one point to get the rents held back for 12 months during discussions and so I am not giving up on the battle as the struggle to improve pay and conditions is an ongoing one which never ends. It is why I would appeal again for younger members to get more involved everywhere across the FC.

“Reps are supported by full-time officials and the training you get on the courses helps a lot as well, you also get the satisfaction of helping your work mates and those reps currently elected can also be drawn upon to offer backing,” said George who closed with a tribute to the late Edwin Rowlands, the former Unite rep in the Forest of Dean. “He was a good man who encouraged you and was available for advice and information. He did a great deal for others,” he added.

To find out more about being a rep please contact George Whitcher by emailing mila.fernandes@unitetheunion.org who will then pass on your details to George. Mark your email for his attention. 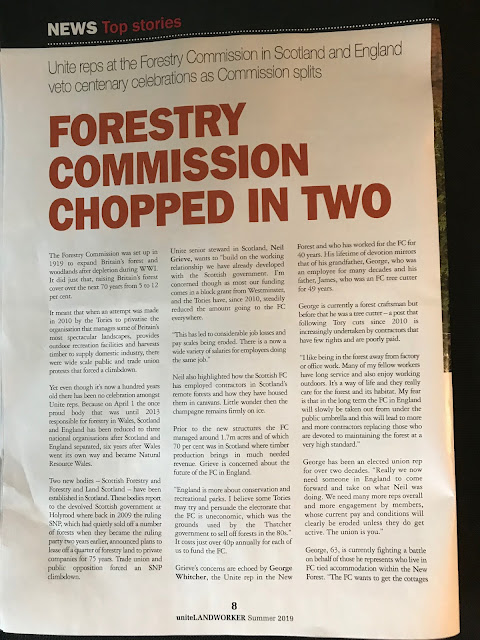 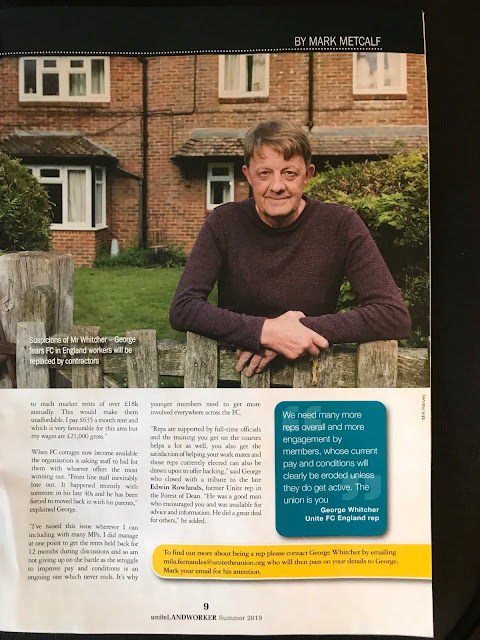