Robert Owen (1771- 1858) was born and died in the small market town of Newton, Powys. Local people have done Owen, described as the first socialist, proud by maintaining a well resourced museum since 1929. From all parts of the globe there are visitors, whose written comments indicate they’ve been glad to make the special effort to discover more about this amazing character.

“ I had heard of Robert Owen, but I didn’t realise his link with Thomas Paine and the other socialists of his time. He was obviously a brilliant man, who improved mankind's lot.”  Alan Watkins, Lincolnshire. 25.09.18

Stamford, Lincolnshire was where Owen travelled when aged ten to become a draper’s apprentice before moving to Manchester, the heart of the industrial revolution. At 21 he was managing a large mill of 500 workers. The poverty and terrible working conditions, especially for very young children, he witnessed across the cotton trade caused Robert to consider developing radical alternatives to a capitalist system that failed most people.

Owen and his partners purchased New Lanark Mills and its workers’ village in 1799. New schools, including the first ever infants’ one, were built, adult evening classes introduced and a healthy environment was promoted by opening shops selling good affordable food.

Owen wanted to demonstrate a way to end the degradation of the working class. But as he pushed for improvements by promoting a Factories Bill to raise the minimum employment age to 10, introduce half-time education up to the age of 12 and create a system of factory inspection, he was left frustrated when it was severely watered down by MPs, many of whom were owners of dark satanic mills’ themselves.

In 1824, Owen sold some of his Scottish holdings. Seeking to expand his social experiments when he moved to New Harmony, Indiana. He returned to Britain in 1828 but his four sons and daughter remained there and subsequently played important political roles with Congressman Robert Dale Owen openly calling on Abraham Lincoln to abolish slavery.

Owen sought to take his co-operative vision to a wider audience by publishing pamphlets, writing to newspapers and speaking publicly.  The museum, organised chronologically, shows how he was key to the development in 1834 of The Grand National Consolidated Trades Union. A famous print of the massive workers’ protest in London against the transportation of the Tolpuddle Martyrs shows him leading it on horseback.

Owen died in 1858. By then the Rochdale Pioneers, inspired by his ideas, had opened the first successful co-op store.

In 1879 a Robert Owen monument was unveiled in Kensal Green. There are also statutes of him in Newtown and outside the Co-operative Bank’s Headquarters in Manchester.

The Museum is free to visit and is an independent charity run entirely by volunteers, who should be congratulated for their efforts. 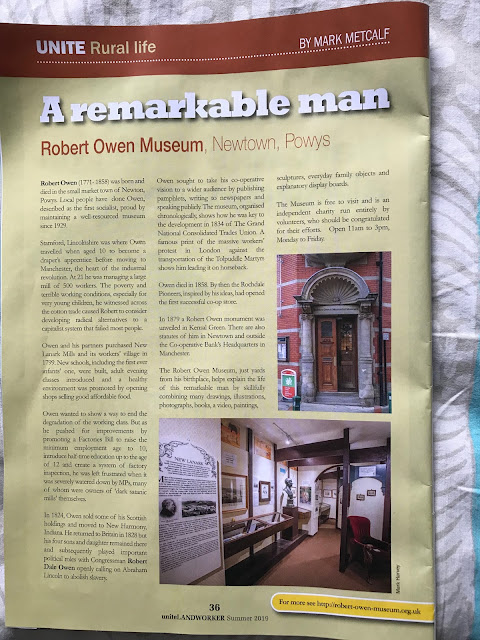