Young English workers lose out since loss of AWB

The Agricultural Wages Board (AWB) for England and Wales was scrapped in 2013 by the heartless Tories - and their austerity cousins, the Liberal Democrats, who ironically helped establish the AWB over a century earlier. At the time, Unite warned that agricultural workers in England faced being paid less than those in Scotland and Northern Ireland, which have had their own AWB’s since 1949 and 1977 respectively.

The move left thousands of workers in Wales and England without union representation over wages and conditions and with no way of knowing when they might next receive a pay increase.

Fortunately, in Wales there was a devolved assembly Labour Government that was on the workers’ sides. It fought a legal battle that resulted in the Supreme Court allowed it to establish a dedicated Wales AWB to protect 13,000 low paid agricultural workers. English agricultural workers meanwhile have been left isolated by only being covered by the national minimum wage.

This means a 17-year old agricultural worker in Wales working 40 hours a week will earn £308 a week, while his English counterpart will earn £174 — a whopping £134 a week less. The difference if you are aged 19 is lower but still corresponds to £62 a week.

In an era when the average age of farmers is 59 and there is a desperate need to encourage young people to take the first step on the ladder to becoming a farmer then isn’t it ridiculous that young agricultural workers in England are being so ruthlessly exploited compared to their counterparts in other UK nations?

Meanwhile, the divide extends to over 25 year olds as qualified workers at grades 2 and 3 in Wales earn £8.45 and £8.70 respectively. There no longer exists such grades in England - who are guaranteed just £8.21 an hour.

There are also additional allowances in Wales for night work and keeping one or more dogs. Again there are no guarantees for English workers on night work or keeping dogs.

In Scotland where Unite continues to put the case for better pay on the AWB the situation is better than anywhere else as all agricultural workers are now being paid £8.21 an hour.

The grading structure in Northern Ireland is slightly different but generally: 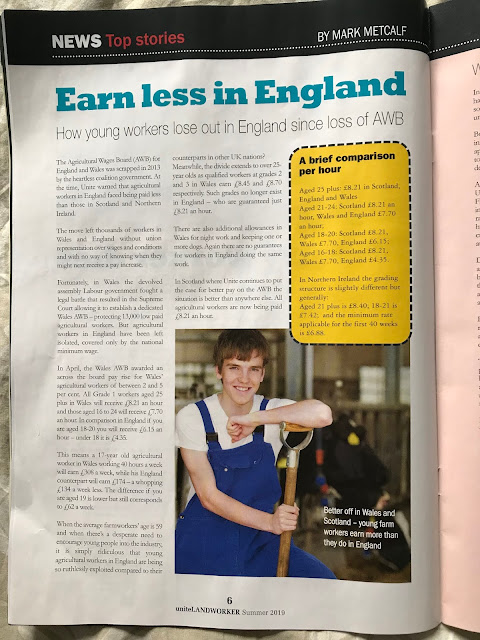