A bad tick for bosses: Forestry worker Jim Newall got help from Unite after tick bite left him too ill to work

Jim Newall, a long serving Forestry Commission (FC) employee who was recently forced to retire on ill health grounds has thanked Unite for “its excellent legal and emotional support” on a successful personal injury claim against his employer.

Jim, 61, loves the outdoors. He began work for the Scottish FC over four decades ago. He was a wildlife ranger before becoming a communities and recreation ranger.  “I really enjoyed the job. I worked with schoolchildren around preventing forest fires and on rural skills projects that were ideal for young people who were not academically inclined but really liked working on the land.

“I worked with community groups composed of retired people who cleared paths, dug ditches, enjoyed working together and kept themselves fit as a result of the work they undertook amongst some beautiful countryside areas.”

Born and bred in the small village of Patna in East Ayrshire, he intended working until aged 66. But in 2014, whilst working in Galloway Forest he developed a red rash around where he was bitten on his leg by a tick. “The FC has leaflets telling us what to do and I followed the instructions. My doctor gave me some creams and they made no impact.

“Initially my GP did not know what was wrong with me as most tick bites are harmless. I was off work for many weeks because I was just too tired to work. Blood tests confirmed I had Lyme Disease, which is caused in humans if the tick has already bitten an infected animal.”

Despite his illness, Jim returned to work on reduced hours. It made no difference as he was needing to sleep continuously. The FC sent Jim for specialist advice but that proved to be of limited help.

Patna, built in 1802 to house local miners, has a trade union history. “My dad, James, was very active in the miners’ union. I joined the TGWU when I started work at the FC. A union is the only voice you have as a worker. I have never been a union rep but I am a passionate trade unionist.

“When I reluctantly realised that I was going have to finish working I contacted my union rep Neil Grieve. With 24 hours I was speaking to Thompsons solicitors. A personal injury claim was submitted. It was due to go to court but the FC made an offer and I was more than happy to settle. I received all the compensation I was awarded. I know from reading about how personal injury solicitors work that would not have been so if I had been forced to take up the case privately. Unite was also great in assisting me in negotiating early retirement. I can’t thank the union enough.”

Jim is also buoyed as he has heard that the FC is intent on strengthening its safeguards against its employees being bitten and is supplying Permethrin-treated clothing in areas where there is an increasing likelihood of ticks.  “Hopefully it will reduce the chances of other FC employees suffering my fate.” 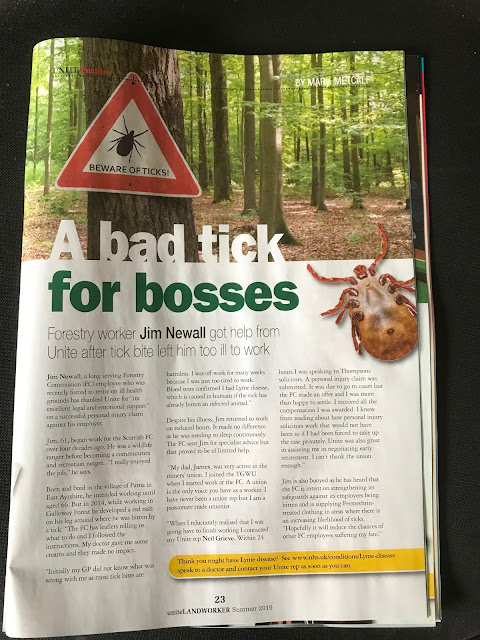