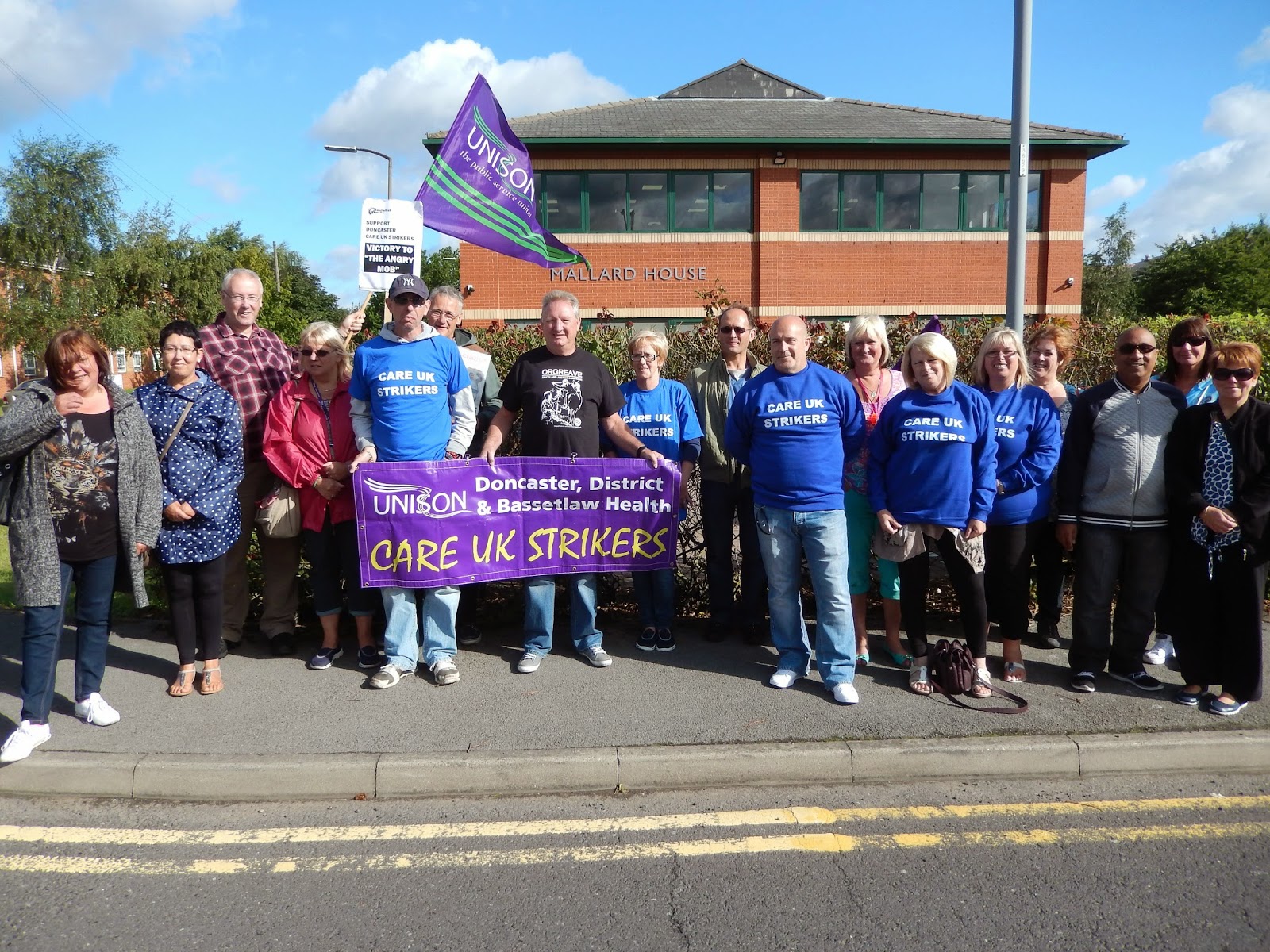 From Big Issue in the North magazine, please buy a copy when you see a seller.
Fifty experienced care workers in Doncaster who look after people with learning disabilities have so far taken 48 days strike action this year. Last year, the former NHS workers were transferred from the public to the private sector when Care UK won the £6.7 million three- year contract from Doncaster Council to run community care services for their clients in the South Yorkshire town.
Since the 1990s public authorities have consistently transferred their care services for people in their own homes to the private sector and today just 11 per cent remains public. Care UK, which nationally employs 20,000 workers, earns 88 per cent of its annual £650 million income from public funds.
The newly appointed private sector firm sought to make £1.5 million savings from around 200 workers by proposing wage cuts of 35 per cent for its staff and paying 100 new workers
a lower rate of £7 an hour immediately. Many of those on strike have built up professional qualifications for looking after people with learning disabilities but not so the newcomers.
Faced with such massive cuts in their £21,000 a year average income the workers pushed their union, Unison, to ballot them for industrial action after they refused to sign new contracts offering them worse terms and conditions. The result among the 93 staff balloted was overwhelmingly in favour of taking strike action starting in March.
In early August the remaining strikers, the numbers of which have dropped as some people have found alternative employment and others have returned to work, took a further 14 days action.
The strike has been maintained by significant donations, mainly from fellow trade unionists, totalling over £100,000. As a result strikers get roughly the equivalent of what the new staff get paid daily.
Strikers have been active in publicising their case and picketing outside the Doncaster offices of Care UK has taken place each strike day.
‘Privatisation of NHS’
Senior support worker Roger Hutt has been in his current job for 34 years and it is the first time he has been on strike.
He said: “What has been done to us is privatisation of the NHS and everyone suffers as a result. I have put my professional career into helping people with learning disabilities and we have improved their lives.
“The work is mentally and physically demanding and you should be properly rewarded as a result. We understand that if the contract had been kept within the NHS there may have been some reductions but nothing like as great as those proposed.”
Angela Shay exceeds Hutt’s service by two years. Soon to retire she was devastated at taking strike action but said: “We have no alternative as the people I work with are like an extended family and they require dedicated staff to work and support them. I am not attacking the new workers but it is just a job for them – the low wages and the lack of training will ensure that is the case.”

Thirty years ago, Kevin Horne was on strike for a year as part of the miners’ strike. He was arrested at Orgreave in 1984 and later had the charges against him dropped. When he was made redundant from the pit he started working in his current post 19 years ago.
He said: “I am proud of being part of a group of workers who have made it possible for people with learning disabilities to live in the community. I have worked with the same group of boys as they have grown up and they have become part of my extended family.”
Care in the Community was a controversial policy started under the Thatcher government in 1983 that led to disabled people being treated and cared for in their own homes rather than in an institution. In the past people with learning disabilities could expect to live much of their lives in an asylum. Some strikers fear there may be a return to the past as it may be cheaper to keep people locked up.
Solidarity
The Care UK strikers face a difficult struggle. Their local MP, Ed Miliband, Labour leader, has never been on the picket line or spoken alongside them. Unison has no plans to extend the strike as attempting to bring out other workers in solidarity would come up against the anti- trade union laws.
Care UK says any pay increases are unaffordable and insists it has protected the pension rights of workers transferring from the NHS. It also says it has protected jobs at a time when funding from the council for the service has been cut.
Cash settlement
Elsewhere in the north, workers at Optare, the Leeds-based coach and bus manufacturer, went on strike in June after being told the company intended shutting its Sherburn site for two weeks during the height of the summer season when family holidays cost almost double. Members of Unite, the biggest union in Britain, won a compromise deal of a one-week shutdown this year, a cash settlement and an extra half-day holiday.

In Gateshead on the massive Team Valley Industrial Estate, over 100 Unite members at Tyneside Safety Glass were on strike for three weeks in June and July before their employer offered an inflation-beating pay rise, dropped plans to increase the working week and reinstated a sacked worker.
Unite is hoping that the success will encourage non-unionists to consider becoming trade union members. Trade union membership levels in England fell by 595,000 between 1995 and 2013, although across the north density levels remain relatively high in some regions, with South Yorkshire, Merseyside and the North East all above 35 per cent amongst those who are employed.
Pay cut
The issue of pay has also motivated hundreds of thousands of trade unionists to take strike action this year. On 10 July teachers, civil servants, firefighters and council workers walked out for the day following disputes over pay, pensions and service cuts. Firefighters have since taken industrial action over pensions.

A further strike by public sector workers has been called for 14 October. Those taking action claim they have suffered a 20 per cent real-terms pay cut since 2010. With below inflation pay rises of just 1 per cent being offered by their employers this year they hope to persuade the government to increase their wages. There is no indication this is going to happen.
By October, Care UK strikers will have again taken strike action after they unanimously voted to take a further three weeks away from work. Horne will not be participating.
“It is only because I am retiring as I could never, ever cross a picket line – a principle once universal among working people but which is less so today,” he said. “Strikes are a last resort but I do not regret taking part in either the miners’ or the Care UK strike.”