There have been worse goalless draws but nevertheless it means these sides have scored just one goal between them in their three matches apiece. And whilst Swansea now have two points in their first Premier League season they surely must beat the likes of last weekends opponents Wigan or Sunderland at the noisy Liberty Stadium if they are to retain their status in the top flight. 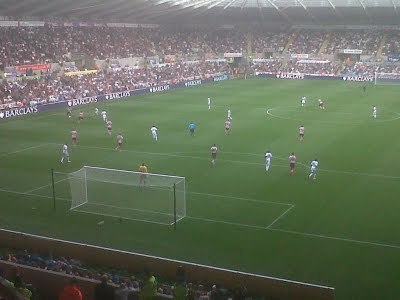 It was the failure of each sides record signing’s in front of goal that kept the scoresheet blank. First £2.5 million man Danny Graham was too slow inside the box, allowing Wes Brown to block, and then just before half-time the former Watford man headed Kenny Agustien’s cross past the post when left unmarked six yards out. On the restart he did bring a flying save from Simon Mignolet but then after turning Anton Ferdinand a better striker would surely have netted from eight yards out.
Sunderland’s Asamoah Gyan cost £13 million and in the first half when he timed his run to break clear with Stephane Sessegnon’s through ball at his feet he shot too close to the body of keeper Michel Vorm. In the second period he was too slow in shooting when left unmarked inside the box and then towards the end he hit a poor shot after Sessegnon had again sent the Ghanaian beyond the home defence.
All of which meant that the nearest either side came to scoring was when John O’Shea rose high to power Sebastian Larsson’s corner against the crossbar after just two minutes and when Scott Sinclair hit a 30 yard drive that beat Mignolet but crashed back off the crossbar. Had that gone in and Sunderland lost then the growing dissatisfaction with manager Steve Bruce amongst the Wearsiders follower's, over 2,500 of whom made the 700 mile round trip, would have increased and amidst rumours that Bruce and Gyan have fallen out it was interesting to see the striker stay longer than anyone else on the pitch at the end before throwing his shirt into the away section.

Home - many of the noisiest section in the stand next to the away fans stood for the entire match.