Rochdale 0
Carlisle United 0
Pity the punters who paid between £15 and £20 to watch this poor fare. True some of the passing and movement off the ball was first class but in terms of goalmouth action, never mind serious efforts at goal, there was very little to speak of. So much so that it wasn’t until there were 24 minutes on the clock that an Ashley Grimes header had anyone dreaming of a goal. Much more wasteful was Joe Thompson who minutes later rose unmarked to head Nicky Adams corner over the Carlisle bar.
The best move of the first half came just before the end when following some fine interlink play home skipper Gary Jones saw his 18-yard effort flash over, before Peter Murphy shot narrowly wide in Carlisle’s first real effort on goal.
On the restart Grimes saw Adam Collin deny him with a decent save before home fans appealed for a penalty when Jean-Louis Akpa Akpro went down in the box. Rochdale then had Marcus Holness to thank for keeping them level when he closed down Tom Taiwo in the six-yard box. With the away side exerting late pressure James Berrett fired narrowly wide before Rochdale responded with Andrew Tutte, impressive throughout, beating Collin, but also the far post to ensure the game ended goalless. 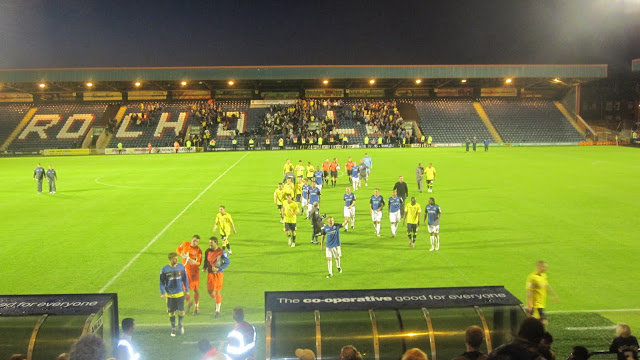