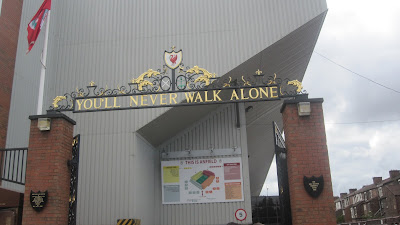 Referee Phil Dowd’s generosity allowed Sunderland to escape with a point from Anfield. Having been punished for his complacency in failing to clear quickly enough Kieran Richardson brought down inside the box Luis Suarez as the Liverpool number 7 shaped to shoot.
It was true that the Uruguayan had taken a little too long in rounding Simon Mignolet but there seemed little doubt that Richardson had prevented him opening the scoring and should have been down the tunnel. In the event he was still on the field when Suarez walloped the penalty kick high over the goal.
A few minutes later this sad miss was forgotten when Suarez stooped neatly to head Charlie Adam’s free-kick beyond Mignolet. At this point there seemed absolutely no chance of Sunderland getting to half-time without being well behind and yet despite plenty of possession the home side did not do too much with it, although on another day the half shove on Anton Ferdinand by Andy Carroll might not have brought the free-kick the Sunderland defender was awarded before the Liverpool centre-forward beat Mignolet.
The keeper was also grateful to the crossbar when following a superb 35 yard run Stewart Downing hammered a powerful shot that deserved better.
Sunderland had rarely threatened in the first half but on the restart they were quickly level when Sebastian Larsson met Ahmed Elmohamady’s dropping to cross to volley past Pepe Reina, before running towards the ecstatic Sunderland fans in the corner.
With Asamoah Gyan and Stephane Sessegnon now seeing more of the ball up front and new man Wes Brown in resplendent form at the back Sunderland were dominant. They might also have found themselves playing ten men when Jamie Carragher’s challenge left Gyan on the ground and a few minutes off the pitch injured and substituted.
Although they created a number of chances the away side failed to really force Reina into a significant save and towards the end might have paid the penalty when Carroll should have done better with a number of well-flighted crosses towards him in the Wearsiders box.
In the summer plenty has been made of the signings Kenny Dalglish has made but as yet none of the likes of Carroll, Downing, Adam or Jordan Henderson are top-draw players and at the back with Carragher past his best it’s difficult to see Liverpool seriously challenging for a top four spot.
As regards Sunderland, it was a good point. Yet serious doubts remain about Richardson’s defensive abilities. In addition getting goals will be difficult - a better side would after equalising have won - as the departure of Darren Bent in January remains a big loss.
Cost for away fan - £44
Number of away fans - 2,000
Home fans - good numbers but the Kop is a reflection of Liverpool’s glories and is well past its best.
Standing up report - except at key moments the home fans sat most of it with no section of the home crowd standing permanently. Away fans - most stood the whole match.
Posted by Mark at 04:07