Justice for Colombia wants Unite members to urge their MP to sign an early day motion (EDM) calling on the Government to condemn the excessive use of force by the Colombian security forces and to review its training and funding of the police in the South American Republic. As of June 28, 90 MPs had signed the EDM.

On 28 April, trade unions, backed by peasant, indigenous and numerous social groups, organised a well-supported nationwide strike. The demand for the withdrawal of deeply repressive tax changes and a pro-privatisation health care bill was key.

But the protests also formed part of ongoing mobilisations that aligned themselves to demands to tackle poverty levels;  address the human rights crisis and ensure the implementation of the 2016 Havana peace agreement, which ended the long running war between the Colombian government and FARC-EP guerrillas. Justice for Colombia played a crucial role in building the peace deal.

By April 30, 19 demonstrators had been killed and President Duque had been forced to abandon the tax reform. Decades of state assassinations of trade unionists, journalists, political and community leaders helped fuel massive protests when social media showed numerous attacks on demonstrators. Police stations were destroyed in the capital, Bogota.

But the people would not submit and according to Justice for Colombia the demonstrations, including general assemblies that emerged, intensified and were ‘characterised by the mobilisation of young Colombians from poor neighbourhoods… who have become the so-called front line resisting ever-increasing levels of police brutality.’

On May 19 the health bill was abandoned but this success had come at a cost as between 28 April and 20 May there were at least 43 deaths of Colombian citizens as well as thousands of arbitrary detentions. The killings have continued with ESMAD killing Jaime Alonso Fandino, aged 33, on 21 June. He was shot in the chest from close range.

Colombia’s rich natural resources has traditionally made it an investment target for overseas companies and the UK is the second largest investor there after the USA.

This investment might explain why amidst the carnage, overseas governments have remained unwilling to criticise the Colombian authorities.

EU Ambassador, Patricia Llombart, reported in late May that ‘the 17 Ambassadors of the EU in Colombia give our backing to dialogue and negotiation as the only path to a sustainable solution to the crisis.’

The UK government has refused to condemn the actions of the Duque administration and in a letter on May 27 to the Parliamentary Human Rights Group it continued to boast of the training that Police Scotland are providing to Colombian police and military. This follows a five-year programme between 2015-2020 where the Tories spent £2.3 million in which training was provided by the National Crime Agency for the Colombian police, including very possibly militarised units.

The UK Government is also allowing the sale of equipment to Colombia that could be used for human rights abuses.

Justice for Colombia, formed in 2002 by British trade unions,  promotes solidarity links to Colombia civil society. Many Unite branches are affiliated but if yours is not then consider doing so by visiting www.justiceforcolombia.org

To see if your MP has signed the EDM visit www.justiceforcolombia.org/news/urge-your-mp-to-sign-early-day-motion-on-state-violence-in-colombia/ 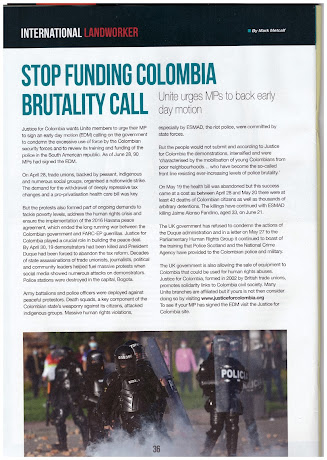