With agricultural workers, especially those under 22, across England continuing to be worse off than their UK counterparts it is vital that UNITE defeats proposals by the Northern Ireland executive to abolish their own Agricultural Wages Board. (AWB)

The England and Wales AWB was scrapped by the Con-Dem coalition government in 2013. Agricultural workers in England faced being paid less than those in Scotland and Northern Ireland, which have had their own AWB’s, on which Unite represents agricultural workers, since 1949 and 1977 respectively.

The move left thousands of workers in Wales and England without union representation over wages and conditions and with no way of knowing when they might next receive a pay increase.

In Wales there was a devolved assembly Labour Government which fought a successful legal battle that allowed it to establish a dedicated Wales AWB, (officially known as the Agricultural Advisory Panel for Wales) on which Unite sits, to protect 13,000 low paid agricultural workers.

A 20-year-old in Scotland is thus guaranteed £356.40 for a 40-hour working week, in Northern Ireland it is £299.60 and in Wales the figure is £313.60. The sum in England is £262.40, considerably less than elsewhere. The differences for a young person in England aged 18 or under is even greater. It is hardly surprising that young workers in England are not considering entering the agricultural sector.

AWBs also cover pay for workers or all ages in lieu of wages, sick pay, holiday pay, piece rates, overtime rates at 1.5 times the standard rate and it limits deductions for accommodation to a flat rate and which in Northern Ireland is £45 weekly.

The drop in living standards for agricultural workers in England is exactly what UNITE predicted eight years ago.

A UNITE survey in 2014 found that just 56 per cent of those previously covered by the AWB had had a pay rise. This was despite a third asking for one. Those that did get a pay rise had received less than the whole economy average. Eighty two per cent had any pay rise imposed by their employer, destroying the government and employers earlier claims that abolishing the AWB would free employees to conduct individual negotiations with their employer.

The survey also revealed that no sick pay was being paid by some employers, who had also added an extra hour to the working week before overtime was paid.

The history of the AWB can be traced back to the radical, reforming Liberal government in the years leading up to WWI. In his role as Deputy Prime Minister from 2010 to 2015, the Liberal Democrat leader  Nick Clegg propped up the austerity programme of David Cameron and George Osborne and  helped scrap a board that even Margaret Thatcher retained.

Clegg, who is now Vice‑President for Global Affairs and Communications at Facebook, was knighted for his services in the 2017 New Year Honours list. He should never be forgiven for attacking agricultural workers throughout England.

In Northern Ireland the AWB is the final collective bargaining mechanism with a responsibility for private sector workers. As the evidence from England since 2013 demonstrates its abolition will ”open the door to a post-Brexit race-to-the-bottom on workers’ and farmers’ pay and conditions” states the UNITE regional officer Sean McKeever.

In January, the Northern Ireland (NI) Department of Agriculture, Environment and Rural Affairs Minster Edward Poots of the Democratic Unionist Party announced his intention to end the NI AWB that covers over 11,000 agricultural sector employees. Poots is a member of the Ulster Farmers’ Union (UFU) which champions the interests of big ranchers and the agri-food bosses.

At the NI AWB meeting in March, Sean McKeever, unsuccessfully pressed UFU representatives to retain the AWB. “There is a particular need for a collective bargaining body covering agricultural field workers………the sector receives a huge amount of public funds ..it is one which is inherently difficult to organise given the scattered distribution of workers and the prevalence of part-time working……..

“The AWB is of vital importance in countering exploitation, which all too often includes the practice of trafficking and modern-day slavery  – especially as many are migrant workers with little other protection.”

Abolishing the AWB in  Northern Ireland will also offer further encouragement to the National Farmers Union in Scotland who are known to favour abolishing the board there.

UNITE is strongly opposing the proposals to scrap the NI AWB. See:- https://www.unitetheunion.org/campaigns/stormont-hands-off-our-farm-workers/

The union has written to the leaders of all political parties to oppose abolition.

If you live in Northern Ireland please send a message to your MLA demanding their party stands up for agricultural field and farm workers and use their Ministerial veto, which is what former Agricultural Minister Michelle Gildernew did in 2007, when it was first proposed to scrap the AWB. Details on this can be accessed by the link above. 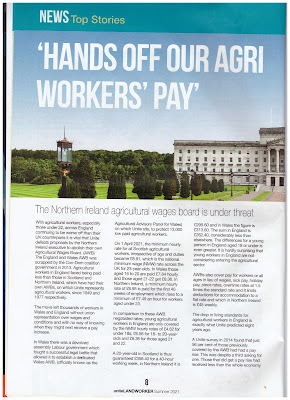