A report into the operations in Scotland of the Seasonal Workers Pilot (SWP), launched by the government in April 2019, that brings temporary agricultural workers from outside the EU, exposes a depressing picture of gross exploitation.

The Focus on Labour Exploitation (FLEX) and Fife Migrants Forum (FMF) report into the horticultural sector is the first ever independent evidence of worker experiences on seasonal agricultural workers schemes.

Between 1943 and 2014 the Home Office ran the Seasonal Agricultural Workers Scheme. Throughout the 71-year period no independent reports based on interviews with participating workers were undertaken, a sure sign of how little successive government’s cared about some of the most vulnerable workers in the country.

In the lead up to the UK’s exit from the EU there were concerns that the agricultural sector was suffering a shortfall in workers, resulting in crops being left unharvested.

To solve these problems the SWP was introduced. It began with an annual quota of 2,500 workers, increasing to 10,000 in 2020 and 30,000 this year – when it was opened to workers from EU countries. Ukrainians have made up by far the largest group of SWP workers.

Funded by the Scottish Government, the research by FLEX, assisted by an independent expert on labour exploitation, Caroline Robertson, benefitted enormously from the experiences of two FMF caseworkers who had previously been seasonal agricultural workers in Scotland and who later undertook academic research qualifications. 146 SWP agricultural workers responded to information requests.

Until May 2021, recruitment for the SWP jobs was undertaken by Concordia and Pro-Force Ltd. Migrant workers who are offered posts must fund their own travel costs plus a £244 visa fee. Costs average out at around £900 for each migrant worker. Many are forced to borrow this money from black market sources.

Many workers complained of discrepancies between the information they received before travelling and the nature of the work they were actually required to undertaken on arrival. Documents are rarely translated into mother tongue languages.

Unsafe caravan accommodation, which is exempt from local authority licensing and must be paid for even if there is no work, and the use of zero hours contracts, combined with payment by piece rates, paints a depressing picture made worse by deportation threats by some employers and the impossibility of finding alternative employment.

The report authors state it ‘identifies a serious risk that forced labour could take place on the SWP if action is not taken.’

They want the  UK and Scottish Governments to consider a lengthy series of recommendations.  They include removing the visa fee and ensuring workers get a guaranteed minimum weekly income of £332.50 for 35 hours a week.

Increasing resources to the Gangmasters and Labour Authority, which has just one staff member in Scotland, is required and there should be new regulations relating to piece rate calculations. An independent helpline with translation into workers’ languages would allow them to raise potential labour abuse. The Scottish Government is asked to offer financial support to migrant community organisations and trade unions.

The Assessment of the risks of human trafficking on UK Seasonal Workers Pilot report is at:- 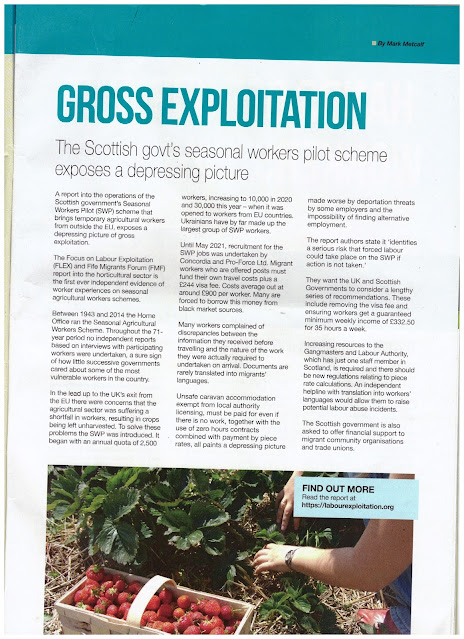