Leeds against the Police Bill events on Easter Friday

Photos that follow are courtesy of Mark Harvey of ID8 photography and are copyright and not to be reproduced without written permission.

A crowd of close to a thousand took to the roads of Leeds City Centre yesterday in protest against the proposed Police, Crime, Sentencing and Courts Bill. (Police Bill) 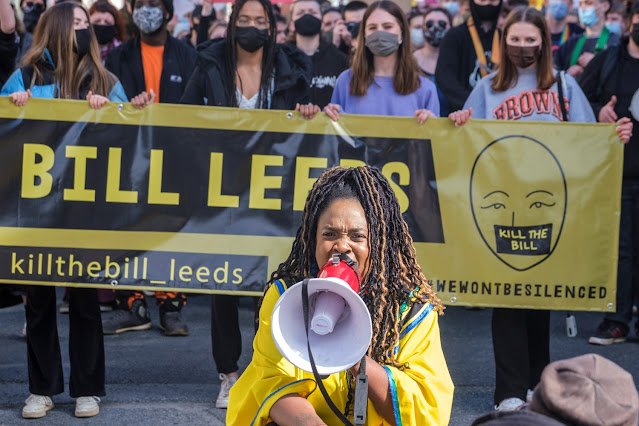 This followed a rally in Millennium Square in which the speakers included trade unionists and political activists from a range of organisations including Black Lives Matter (BLM) and Extinction Rebellion Families. (XR)

The events formed part of a series of similar occasions being organised across the country over the Easter weekend.

As is in the current climate where the police may choose, as they did at the Sarah Everard vigil in London on 13 March, to rigorously apply laws relating to tackling the ongoing coronavirus pandemic, which has been badly handled by the Conservative government, the rally and march were called by unidentified persons and organisations.

As the sun filled Millennium Square in central Leeds the first speaker was Jane Aitchison, President of Leeds Trades Union Council (LTUC) and a longstanding activist within the PCS union.

She received a warm round of applause from amongst a crowd that included just a handful who were displaying trade union flags and whilst the LTUC banner was displayed there was no other trade union banner on show. There was no obvious Labour Party presence and no Labour MP spoke. The largest political party clearly present was the SWP but their numbers were small.

Aitchison, who was unsuccessful when she stood as a Labour candidate in Pudsey at the 2019 General Election, when Jeremy Corbyn’s party, sabotaged from within in the previous years, lost badly.

The Tory Government now has whopping majority and has introduced a series of draconian bills – such as the SpyCops Bill, the Overseas Operations Bill and now the Police Bill- that will if enacted send Britain on a dangerous path towards increased authoritarianism. Labour has abstained on the first Bill, voted against the second and was set to abstain on the third until the police behaved viciously at the Sarah Everard vigil.

Aitchison spoke of the long history of trade union struggles in Leeds including the successful gas workers’ strike of 1889 that led to the setting up of what is now known as the GMB union and physical opposition to Oswald Mosley’s Blackshirted fascists of the 1930s. She appealed to anyone present not already in one to join a trade union and contended that “Together we are strong, together we can win.” Let’s hope so.

Steve Johnson, who is active in Unite Community, spoke on behalf of People Before Profit. He also drew on previous historical struggles referring to 7 people who were slaughtered by the Yeomanry in 1758, the significant backing locally for the French Revolution in 1790 and the Luddite and Chartist movements that sought to give working people control over workplace practices and a vote at elections.

As Aitchison had highlighted earlier, Johnson remarked that the new piece of legislation would make it increasingly difficult for anyone to organise effective opposition against unpopular government laws or, for example, cuts in wages, jobs and services by employers. “Attending demonstrations and protests is one of the few ways of getting your voice heard, “ he remarked and was cheered by the crowd that clearly agreed with him.

Marvina of BLM then got a large cheer when she proclaimed that ‘All lives can’t matter until Black Lives Matter.’

Whilst Liz of XR Families felt that even before the new legislation had been given the go ahead by Parliament there had been an increasing attempts by the police to criminalise some protestors. So,  “we must get louder… to fight all forms of injustice… as we need radical change.”

Emma Hewitt from Leeds Disabled People’s Association not only spoke of how Direct Action by disabled people led to the first Disability Discrimination Act in 1995 but also of how since then many rights for disabled people have been eroded because of austerity.

Denetta Copeland of Stand up to Racism argued that there was “no choice… (but to oppose the Bill)…. as without the rights to protest then you can’t extract change…”

She drew great applause when she, rightly, remarked “you don’t need to put yourself in someone else’s shoes, this is your shoes.”

Woody of Youth Strike felt that Priti Patel was terrified of young people using their voices to seek change and that the global school strike for climate on selective Fridays since 15 March 2019 had successfully altered many people’s views on the need to prevent climate change.

The crowd then made their way on to the nearby road. In the presence of a number of police officers, some of whom were unnecessarily videoing those taking part, the majority of whom were under 30 years of age, the marchers made their way through the City Centre, which was largely deserted. The police assisted the walk, which was lively throughout with drums, music and songs, top of which was ‘this is what democracy looks like’, of around a mile by stopping any traffic.

On the return to Millennium Square there were a number of additional speakers before the crowd dispersed after what had proved, as is the case on most political events, including large marches, to be an entirely peaceful occasion.

Whilst it had been a good day it is obvious that unless many more people and organisations get actively involved then the Bill will eventually become law. Once that happens it will be doubly difficult to legally organise to reverse what will be a severe damage to our rights. 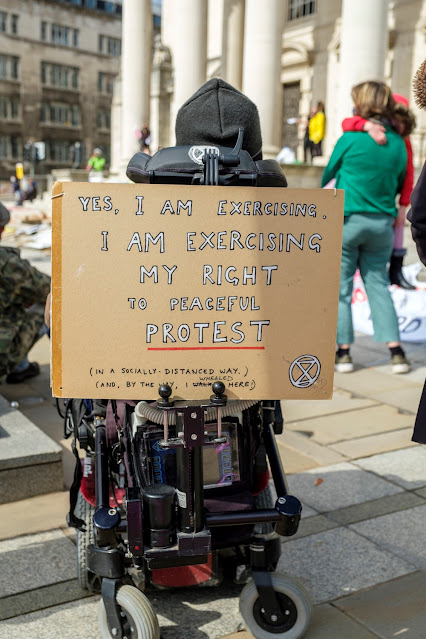 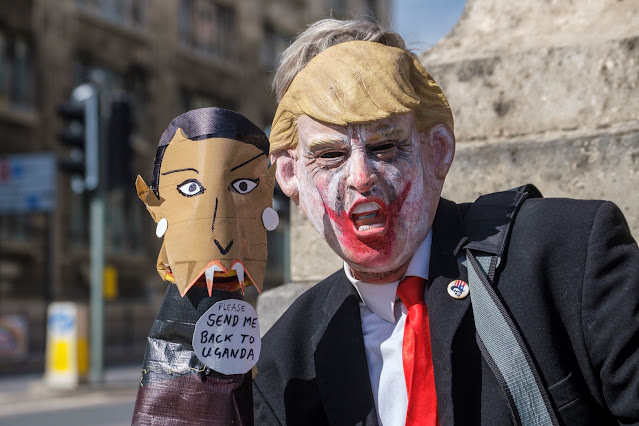