Theatre of mystery
Bridlington hospital to lose mobile operating
Trust and firm cite client confidentiality
Bridlington health campaigners fear for the long-term existence of the town’s hospital after the York Teaching Hospital NHS Foundation Trust said its mobile operating theatre will close next month.
This is the latest blow in a long-running saga in which a hospital that had 218 beds when it opened in 1988 now has just 70 in use.
Protests ignored
Cuts started in 2008 when the Labour health secretary Alan Johnson ignored large protests in the coastal resort and accepted the recommendation of the local NHS trust to move cardiac and acute medical services to Scarborough, 20 miles away. Local residents became accustomed to seeing flashing ambulances rushing seriously ill patients along the busy A64. Sir Greg Knight, the local MP since 2001, who was among the protestors and signed a petition against the rundown of the hospital, said he would expect a future Conservative government to “return all services”. Yet in 2013 the Buckrose Ward for up to 12 mental health patients was closed, with eight beds moved 40 miles away to Hull.
In April 2018 the Macmillan Ward was also closed. This left three operating theatres for basic and orthopaedic surgery. A mobile theatre unit had been installed at Bridlington in 2013 to support orthopaedic surgery.
The mobile theatre is leased from Vanguard Healthcare Solutions. According to York Teaching Hospital NHS Foundation Trust the company will not renew its contract and the theatre will be removed next month. Neither YTH nor
Vanguard would answer Big Issue North’s questions about the decision making process behind the ending of the contract, citing commercial confidentiality.
“Resources are needed”
The planned closure has come as a shock to staff. Chris Daly, regional health officer for the union Unite, said: “The comprehensive service once provided by the NHS is being eroded and patients are suffering. More government resources are needed.
“This is a well respected, successful service and who would benefit from degrading it? Why was the lease not renewed? Had the trust given an indication to the firm it would not be renewing the contract? We want assurances there will be no staff losses.”
The closure has been condemned by Bridlington Health Forum, which brings together voluntary organisations dedicated to defending local health facilities. Its spokesperson said: “The long term existence of the hospital is very possibly in doubt as it is on its knees following numerous cuts.
We want services restored, including outpatients and local rehabilitation beds. Unsustainable and unaffordable travel for even basic healthcare for local residents must be reduced.”
Unlike at the other hospitals in Scarborough and York that are managed by YTH, patients at Bridlington can be assured that their operations will not be stopped due to a lack of beds. Spare capacity meant that no procedures were cancelled due to bed shortages in the second half of 2017, whereas Scarborough and York cancelled 73 and 147.
Knight last year wrote to the then health secretary Jeremy Hunt to ask him to do more to ensure facilities at Bridlington were fully employed. He would like to see YTH being more “open, transparent and honest” on the processes that led to the planned removal of the theatre.
He remains concerned about the hospital being “grossly underused” and disagrees with the removal of some services. However he does not believe the hospital itself is under threat.
Knight has invited health secretary Matt Hancock to visit the hospital with him.
A spokesperson for Vanguard said its facilities were designed for short-term use by healthcare organisations.
“While their use can vary from weeks to years, the facilities may be periodically rotated away from a site, whether that be for maintenance and upgrade work or to help meet the needs of another healthcare organization,” said the spokesperson.
“Where one of our facilities does have to be removed from a site for whatever reason, we will endeavour to work with the trust to offer alternative provision wherever possible to ensure any disruption to the service they provide is minimised as much as possible.”
A spokesperson for YTH added: “We are working on an interim plan for our two remaining theatres to minimise any disruption to patients and to ensure as far as possible that we can maintain theatre capacity at Bridlington.” 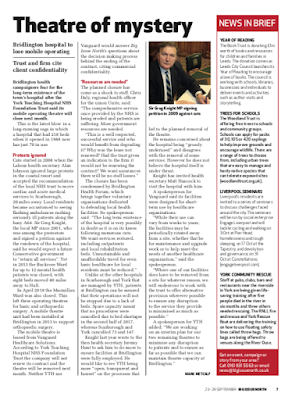