Families hail adapting their homes a success
Autistic children spend more time at home
The cost of adapting homes to allow autistic children to live at home are socially and economically worthwhile, insist their parents.
In 2016 Big Issue North interviewed the Shepherds in Tingley, near Wakefield. Paula and Lee’s oldest daughter Katlyn, then 15, is severely autistic. This creates difficulties in processing sensory information such as textures, sounds, smells, tastes, movement and brightness. Family life can be difficult when ordinary situations overwhelm Katlyn, who can self harm and be destructive, which can frighten her younger sister, Ellie.
Thanks to help from the Access Committee for Leeds (ACL), an unfunded body whose volunteers advocate for disabled people, the Shepherds obtained a £40,000 disabled facilities grant (DFG) from Leeds City Council (LCC). This helped install a new, highly colourful bedroom, an indestructible wet room with a steel toilet and a spare bedroom.
Safe play space
Katlyn’s self-contained space means Ellie can close her bedroom door to block out excessive noise. “Ellie’s school work has benefited because of this,” explains full-time mum Paula.
The new facilities allowed Katlyn to reduce her stay at a specialist secure residential school from six to five nights. “This has now fallen to four in the last three years – if she wanted to be here seven nights a week that would be great,” said Lee, adding that everything must be put away before his daughter arrives home from school, where she is increasingly joining in other activities with fellow students.
“The adaptations have massively benefited the family. We feel sorry for families in similar positions who are refused a DFG, which will mean their loved one spends more time away from home in secure residential accommodation that is costly,” said Paula.
An annual 43,000 DFGs are awarded. Seven per cent are for people aged under 21.
The Shepherds’ views are supported by Ian and Karen, from Otley, whose son Joshua is 11. They were awarded a £165,000 DFG. Significant adaptations include additional safe play space for their son, padding to prevent injuries and a big bedroom that allows someone to sleep next to Joshua, helping prevent self harm. There is also a safe outside play area.
Ian, who quit his job to look after his son, said: “Joshua’s school visits would include some costly overnight stays if we didn’t have adaptations.
It is exhausting caring for Joshua. We are struggling now with his behaviour and he will get bigger.”
When families reach a point where they are unable to care for their children at home then the local authority has a duty to accommodate them at a cost of £7,000-£12,000 a week.
“We look after Joshua because we love him, but doing so reduces public spending and it’s a strong argument for more families with autistic children to have funds to adapt their homes accordingly,” said Karen.
In 2017, the School of Law at Leeds University and the children’s neurological charity Cerebra, with ACL assistance, studied the cost-effectiveness of home adaptations – averaging £60,000 each – for six disabled children. It was calculated that possibly 14 years of local authority funds had been saved due to the adaptations. The study was incorporated into a 2018 parliamentary briefing into disabled facilities grants for home adaptations.
Drawn out decisions
Tim McSharry of ACL said: “Apart from the wellbeing impact on younger disabled people and their families we believe the public purse savings of adaptations are considerable. The government should provide clearer advice, increase significantly the funding and scrap means testing of DFGs above the £30,000 cap.
“It should replace the discretionary basis that permits the maximum limit of £30,000 for adaptations to be breached with clearer statutory guidelines.
“Decisions are taking too long, leading to young people becoming looked after in institutions sooner than might otherwise be the case. The government should take time to re-examine the Leeds study and roll it out nationally.”
A government spokesperson said: “Local housing authorities have a statutory duty to provide adaptations to anyone who qualifies for a DFG. We have invested more than £2.7 billion in DFG, providing over 280,000 adaptations by the end of 2018-19. DFG funding has increased from £220 million in 2016-17 to £505 million in 2019-20.”


A review of the DFG by the University of the West of England, published late last year, makes 45 recommendations. The government spokesperson said it would respond in due course. 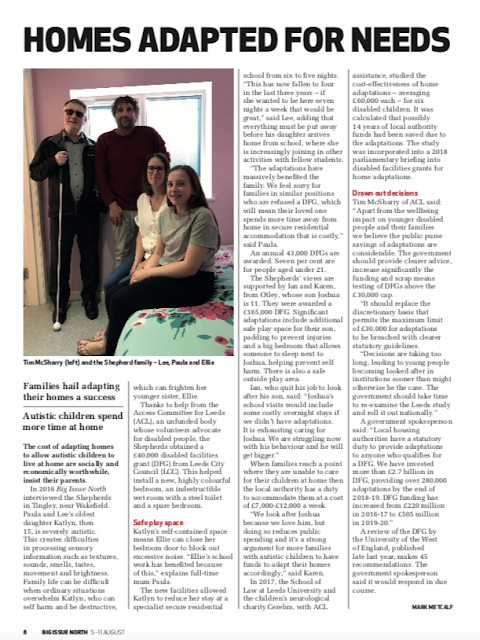