Industry called on for mental health support
Brexit is named as one source of stress
Farmers have highlighted the need for support for people in the industry suffering from poor mental health.
Financial worries and the isolation some face are two major factors that have led to one suicide a week in farming.
Their responsibilities towards the environment and Brexit are said to have added to farmers’ concerns.
Denys Fell, a farmer from Hornsea, Humberside, who has suffered depression himself, promotes the East Riding Rural Stress Initiative and the Farming Community Network, which help farmers suffering from poor mental health. He wants to ensure more farmers in need are aware of the help available to them.
Fell and his wife Mary manage a 270 acre farm that grows mainly wheat and look after up to 200 sheep. Fruit and nut trees, potatoes and flowers are also harvested.
He suffered from depression after the foot and mouth crisis of 2001. Two farmers he knew took their own lives.
“For three years I could see no way out of it,” said Fell. “I was taking medication and very frightened. I needed help and fortunately my local doctors were excellent. They helped me to change the way I thought and behaved. I was keen to make sure that other farmers received similar help.”
Isolation and pressure
He said isolation was a particular problem for farmers now financial pressures have cut the workforce.
“Years ago most farmers would have employed staff and had time to go to market, where they would meet people,” he said. “Many now spend most of the time alone. They have to be independent and hard working and, once they lose motivation, which is easy enough if you see a crop you’ve grown being wiped out overnight, then this can become a problem that can quickly escalate and get out of hand. It helps to be able to share problems.
“Anything that can highlight the problems and signpost farmers to specialist care people is a good thing.”
Paul Wright, a Lancastrian farmer, agreed, but added that farming has the highest percentage levels of workplace deaths, with around 18 per cent of all deaths in an industry that employs just 1.4 per cent of the workforce. “This is also a problem that needs tackling,” he said.
Wright also fears that some farmers diagnosed to be suffering from mental health problems are actually medically unwell. He had to quit farming after finally being diagnosed
with organophosphate (OP) poisoning. He attributes this to dipping sheep using products with OPs, which as long ago as 1951 were found to produce a range of symptoms including memory loss, depression and psychosis among people exposed to them. Zuckerman recommended that OP products be labelled deadly poisons.
This advice was ignored. In the 1970s sheep farmers were legally required to tackle sheep scab by using products containing OPs. No protective clothing was offered.
Later, Littleborough shepherd Brenda Sutcliffe, herself an OP victim, campaigned to highlight
the issue. She had a list of over 1,000 farmers who she considered had committed suicide over a 10-year period because of OP sheep dip. Sutcliffe died in 2017, by which time the law had changed so that anyone dipping sheep must obtain a safety certificate and wear protective clothing with a separate air supply.
“Brenda was a lone voice for many years,” said Wright. “I dipped sheep as a teenager and for many years after.”
Often unable to cope mentally, Wright has on four occasions attempted to take his own life. “I now visit a psychiatrist and it helps,” he said. But he remains unconvinced about the safety of current sheep dip procedures.
“It is only the one on top of the dip that must wear equipment,” he said. ‘When the sheep emerge from the dipping they are then put into pens to dry off and you can see the steam rising up. The animals also have to be handled afterwards.
“The public authorities should examine suicide rates among sheep farmers and undertake medical examinations to see if they have been affected by OPs. Bodies that are offering farmers advice on mental health issues should also be raising this as something to be explored.”
In 2008, Fell opened a community care farm on his land. Students with disabilities, learning difficulties and mental health issues attend.
Fell believes similar initiatives elsewhere could prove doubly beneficial for farmers. Firstly, as a social enterprise the care farm generates income and employs 12 people. It also breaks down isolation for the farmer.


“We feel that working in the countryside, engaging with nature and building friendships with others at the farm can be enormously beneficial for students,” he said. 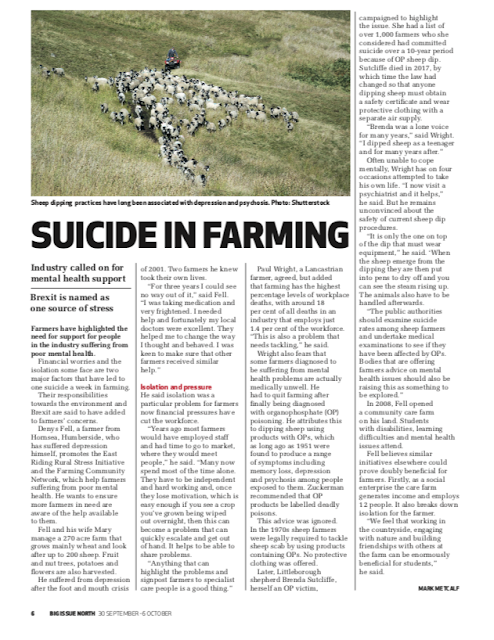