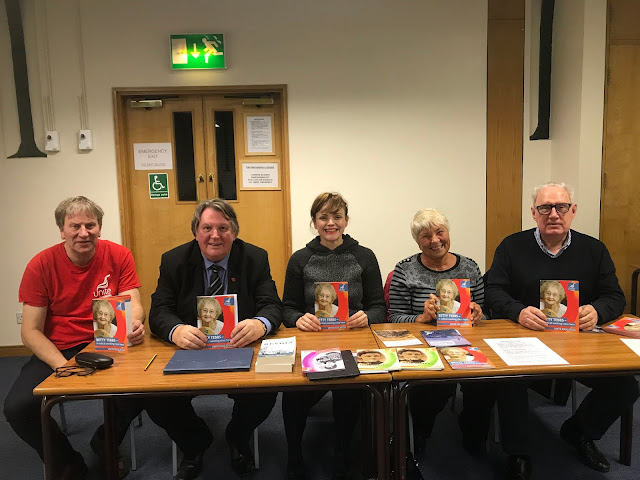 Bury born Betty Tebbs was a working class socialist, trade unionist, internationalist, equals rights champion, Peace activist and a class fighter for all of her 98 years. The 64-page biography of a remarkable woman is based on much of Betty’s own writings and is published by Unite the union.

5pm on Tuesday 5 November 2019 at the Mechanics Conference Centre, Manchester

Born in 1918, Betty became an activist in one of Unite’s legacy unions, the National Union of Printing, Bookbinding and Paper Workers, which later became SOGAT and eventually the GPMU. 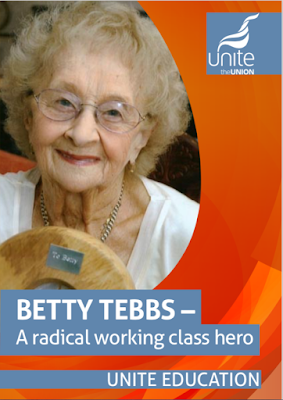 As a young woman Betty worked in the East Lancashire papermaking industry where shocked at unequal pay rates she began her work as a union activist, eventually becoming a highly respected Mother of the Chapel (Senior Shop Steward).
During WWII she worked as a crane driver at the engineering munitions factory Mather & Platt. During the war her first husband was killed fighting fascism.
After 1945 she became politically active in the Communist Party and a committed peace campaigner having seen the devastation caused by the atom bombs dropped on Japanese cities. Betty eventually joined the Labour Party and became a hard working Labour Councillor.
Betty also worked in different jobs becoming an activist in the shop workers union, USDAW. On returning to the papermaking industry she voluntarily took a job at the ‘worst organised company’ in her branch. She successfully organised all workers at the company into the union.
She was a delegate to SOGAT conferences where she campaigned for equal pay.  She attended many international conferences campaigning for world peace. She was awarded SOGAT’s Gold Badge.
She was also a founder member of the National Assembly of Women and secretary of her local CND branch. At aged 89 she was arrested on a demonstration at Faslane in Scotland and was honoured by Manchester City Council receiving the Elizabeth Gaskell Women’s Award.
“I was proud to speak alongside Betty at the 2016 Labour Party Conference at a packed Unite-Daily Mirror Fringe Meeting. Even in her 90’s she was a marvellous speaker and received a long and rousing standing ovation following her speech.”   Len McCluskey
“Betty Tebbs was a great friend and comrade. I am therefore delighted that Unite has published this biography by Mark Metcalf of Betty’s remarkable life.
When comrades became disheartened Betty always gave the same answer: “We have to carry on the struggle. It is up to us.” For Betty it was the only answer. Her story is a guiding light for all of us in that struggle.”  Maxine Peake.
For more details:- Mark Metcalf on 07392 852561 mcmetcalf@icloud.com