The father of an airline steward whose dead body contained organophosphates has accused the airline industry of evading questions that toxic fumes circulating within airlines are causing serious illnesses and deaths among staff.
The views of Charlie Bass, a former aircraft engineer in the Royal Navy Fleet Air Arm, are supported by a pilot who has retired early due to ill health and who is now part of a group action on toxic air.
Matt Bass died in 2014. The 34 year old, who worked for BA, had been unwell for some years and was suffering from severe fatigue. Tests failed to reach a diagnosis. He died soon after returning from a long-haul overnight flight to Ghana. The coroner’s office failed to identify the cause of death. After taking advice from aviation experts, his parents spent £5,000 on tests, which revealed their son had suffered organophosphate (OP) poisoning of his brain and nervous system – in particular the nerves that connect the heart and the lungs to the brain.
Deadly poisons
However, the inquest concluded Matt’s death was due to him having drunk four times the legal limit for drink driving. The coroner did say he was not ruling out exposure to OPs entirely and that he intended writing to the chief coroner to ask him to consider alerting other coroners to the possibility that toxic air syndrome might play a role in someone’s death.
OPs were diagnosed in 1951 by Solly Zuckerman, the UK’s chief scientific advisor, as deadly poisons. They can accumulate in the body and attack the nervous system and brain cells. Symptoms can include memory loss, depression and psychiatric effects.
Soldiers who served in the First Gulf War and many farmers have claimed they have suffered from being forced to use OP products. OPs were present in the chemical sprays used on tents where soldiers were billeted, and in sheep dip.
OPs are present in aircraft engine oils, which can enter the cockpit and passenger cabin because of faults with engine seals. With airlines deciding not to install detection systems it is difficult to verify whether a contaminated air event has occurred, unless smoke can be seen. But when growing numbers of airline crew began to believe that their long-term health problems were the result of breathing in unpleasant-smelling air the Aerotoxic Association was born at a parliamentary meeting in 2007.
Union action
Since then many more crew have been raising their concerns. The union Unite is currently pursuing 51 court cases involving pilots and cabin crew working for EasyJet, BA, Virgin Atlantic, Jet4 and Thomas Cook. Unite has established a fume incident register.
Dave*, a former pilot, claimed to have suffered several fume events before quitting work with chronic fatigue. After a lengthy struggle with the medical profession he was eventually diagnosed as suffering from OP poisoning. He started pursuing a case for medical damages. He believes that if the group action is successful it could play a role in forcing the civil aviation industry to act “as it could cost the companies huge sums of money in compensation”.
He said: “I am grateful to Unite for taking on my case. I had a great life. I loved taking control of large airplanes, I was very well paid and have seen much of the world.”
“Understood to be unlikely”
Airline companies are also being hit by other costs on this issue. On 5 August a BA flight from London Heathrow to Valencia was evacuated after fumes filled the aircraft. It has been reported that the plane had previously been grounded following two similar incidents.
Dave said: “Former colleagues report the incidents are increasing. More planes are being grounded with passengers being accommodated overnight. EU regulations means companies are fined 600 euros per passenger if there is a three hour delay and so the costs are rising. Companies should start by admitting there is a problem and then fixing it.”
Big Issue North sent BA, EasyJet and the former Thomas Cook Group a lengthy series of questions asking if the companies were confident staff and passengers were not being made unwell by aerotoxins and what measures they were taking to prevent toxins entering the aircraft. Would they be considering installing fume detectors in their planes? Statistical information on fume incidents was requested along with crew sickness statistics.
BA was also asked if it intended responding to staff requests for risk assessments under the Health and Safety at Work Regulations 1999 and specifically those relating to the Control of Substances Hazardous to Health.
BA did not respond while the other two provided short statements. EasyJet said: “Incidents are extremely rare of smell events... which we try to prevent where possible using preventive engineering solutions.”
Questions to the Civil Aviation Authority (CAA) brought the following reply: “Long term ill health due to any toxic effect from cabin air is understood to be unlikely, although such a link cannot be ruled out...a recent study commissioned by the European Aviation Safety Agency... concluded that the air quality they tested was similar or better than that being observed
in normal indoor environments.”
The CAA added: “Public Health England (PHE) are responsible for the enforcement of Health and Safety legislation on board aircraft, not the CAA.”
“Evasive on the issue”
In response to this a spokesperson from PHE said the organisation “has no regulatory responsibilities in this area”.
Big Issue North then sent questions to Grant Shapps, transport secretary, plus the CAA chair and chief executive. No replies were received.
Charlie Bass said the failure to answer Big Issue North’s questions was typical of the industry’s evasiveness on the issue. “Similarly, with regard to the CAA telling you it is the responsibility of PHE to enforce health and safety legalisation, this is yet another statement from them that is designed to avoid answering your questions,” he said. “They have done the same to me on numerous occasions.
“The Health and Safety Executive has told me very clearly it is the CAA who has responsibility for health and safety.”
*not his real name 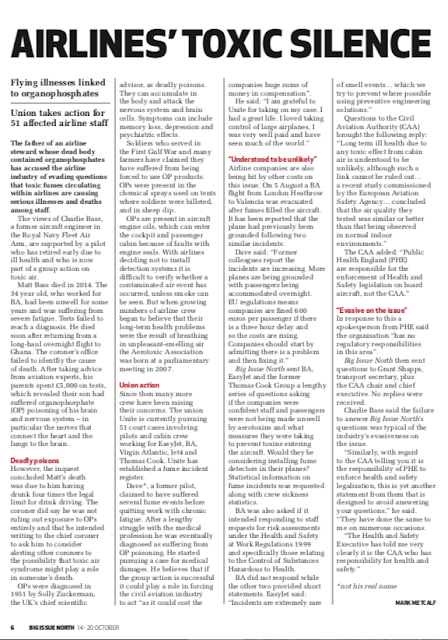