The owners of Tetley Tea have defended themselves against accusations of brutal mistreatment of employees at the Nowera Nuddy tea estate in north western Bengal, India.
It comes after a contingent of workers, all members of the Progressive Tea Workers Union [PWTU], journeyed 400 miles from their plantation to participate in a protest outside the headquarters of Tata Global Beverages [TGB] in Kolkata.


Handing in a letter to the company controlled by the Tata Group that owns Tetley Tea protestors asked for TGB to “instruct the management of Amalgamated Plantations [AP] to engage in genuine negotiations.” Amongst those present were dismissed workers Sudhir Xaixo and Kishor Toppo, father of the eight month pregnant tea plucker Mrs Arti Oraon whose treatment is at the heart of the conflict.
This started on August 10th 2009 after workers were angered by what they perceived as the denial of maternity leave after Mrs Oraon collapsed in the field and was taken to hospital on the back of a tractor. Under Indian law leave commences six weeks prior to the expected delivery date.
But with AP management alleging Mrs Oraon still had a couple of weeks to work on grounds that the baby wasn’t due to mid-October up to 500 mainly female workers left their work stations in protest. Previous perceived maternity leave injustices were raised and the dismissal of AP’s medical officer was demanded.
With the company claiming the medical officer had been badly attacked it declared a lock out of two weeks, called in the police and after holding an internal enquiry, that refused to take statements from those locked out , suspended eight workers. When workers refused to return unless their colleagues suspension was lifted another lock out of almost three months was imposed. During which time no wages were paid and arrest warrants were issued for 12 workers. With charges against them including grievous bodily harm, unlawful assembly, criminal intimidation and unlawful confinement there remains the possibility of seven years in jail. 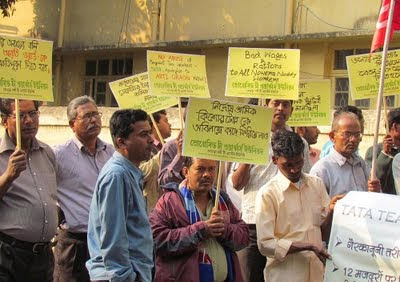 With the Tata Group sharing its Kolkata offices and holding a 49.98% stake in AP, workers and their growing international band of supporters, have called on the company behind the world’s number 2 Tea brand, to intervene to resolve the dispute. A UK spokesperson for Tata said AP management had reassured them that “the medical treatment and maternity policy meets and exceeds all statutory requirements”, but also said that “in light of the fact that AP is independently operated and managed” enquires should be directed to them. Attempts to do so failed to bring a response.
The International Union of Food, Agricultural, Hotel, Restaurant, Catering, Tobacco and Allied Workers' Association is supporting the Nowera workers and for more details see http://www.iuf.org/