Fifty years on and have things improved for people of Muslim faith?

The view of a man who might know. Fazalur Rehman Tariq came to Britain in 1961. He’s chairman of the Elland Mosque Association that’s situated equal distance between Halifax and Huddersfield in West Yorkshire. It opened in 1972 to help preserve the culture and identity of the different generations. Active on many fields, including acting as the secretary-general at the Huddersfield Council of Islamic Affairs Charitable Trust, he was vice-chairman of Calderdale Race Relations Council between 1979 and 1989.
How would describe the current political situation?
“I am not politically inclined, and appreciate that everybody has their views, but I am aware of a lack of awareness between people’s on other’s cultures and religions and some elements have used this to exploit the more gullible to create hatred.
Currently people are not reporting increasing levels of racial violence, and I feel this indicates that there is less than there may have been in the past, especially in the 60s and 70s. Attacks are not taking place regularly. Of that I am certain, but there are feelings against coloured people – in the past this might have been against all coloured people but now its largely against Muslim people. It’s a recent phenomena largely based around the 9/11 attacks in the USA, which has seen Muslims given the identity of terrorists. The press and politicians are largely responsible for this identity.
At the same time many Muslims are deeply concerned about what is happening in Afghanistan and Iraq, and also Palestine, and they have been willing to attend demonstrations to show this disapproval. It doesn’t mean they agree with the attacks on America or in London, but they don’t want to see troops from the USA and Britain there. In 2009 Sir Norman Bettison, the Yorkshire Police Chief visited the Mosque, and I spoke about my concerns with him, but he said he had no influence over foreign affairs, which I accept.
“A lack of land at home and a labour shortage brought me here.”
Yes, I came to Britain in 1961. I was seeking work after graduating and with no land to farm I was happy to move, as Britain was very keen to welcome Pakistani’s and Indians to this country, as there was a labour shortage. I believe that without our labour Britain would be a lot worse off than it is now – we worked long hours, in difficult jobs and for low rates of pay. 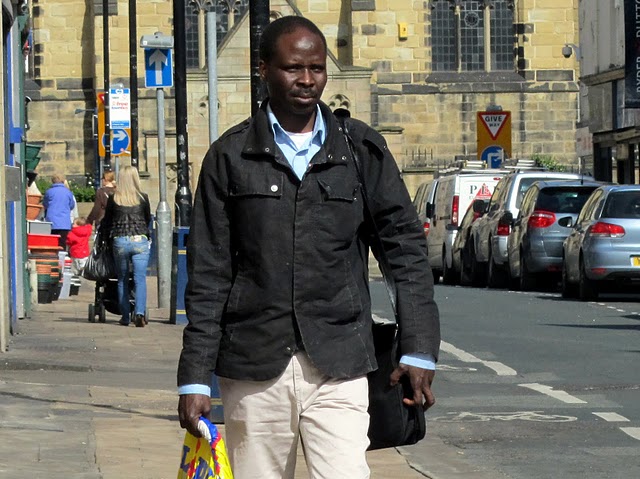 People from Jamaica and Africa were also needed, it wasn’t just people from Asia, but we helped build the Britain that people of all colours know now. It can therefore by disturbing when people question why we are here, as if we don’t have a right to be here. That is especially the case when you consider that most Muslim people were born here. It’s true they feel culturally not English, but neither do they feel Pakistani, and that’s something that it should be possible to accommodate.
Are the streets safe?
In Huddersfield and Elland people are safe to go where they want. That doesn’t mean there aren’t some areas of tension, but in many of those areas even someone from the same colour who lives on the next estate might feel unsafe. It’s a territorial thing, not always about colour.
The attack on the taxi-driver Mohammed Parvaiz in Lockwood in July 2005 when he was murdered was terrible. It does show there is racism and it played a part, but it was also in part motivated by a need for revenge – the taxi driver had reported them to the police and they wanted to make him pay for that. If taxi-drivers were finding their jobs really difficult because of racism many would leave or they would organise protests about this.
Where attacks take place I feel from what I know that it’s not organised, but is a spur of the moment thing. But again I am not wanting to belittle the experience for anyone whose been attacked.
After 9/11 and for a year or so afterwards I would regularly, and others would tell you they had the same experience, be taunted with comments saying ‘hello Mr Bin Laden’, I pretended not to hear, it wasn’t worth it.
What’s your view on the BNP and the English Defence League?
I believe both are motivated by racism. The latter have targeted some Mosque’s, which no one could describe as radical, which makes you question whether they are really just about countering ‘radical Islam.’ Both organisations spoil the atmosphere and prevent people from different faiths and backgrounds appreciating each other’s differences.
And on radical Islam?
I have been concerned by possible developments of radical Islam. Whatever is happening in Iraq and elsewhere I say to the younger people that no one in this country is preventing us from worshipping, and that our opposition to the things we don’t agree with must be done peacefully.
As I said earlier I raised this with Sir Norman Bettison when he visited in 2009. Some Muslims have broken the law in their opposition, but that doesn’t mean as some newspapers have suggested, that all Muslims are to blame for the actions of a few.
At the same time I do feel there is a war being waged against Muslims overseas, former USA President George Bush used the word Crusades [*] shortly after the 2001 attacks on America and that indicates a mindset.
Older Muslim people have direct experience of the British Raj. They know it wasn’t pleasant and it was why people wanted Independence. And people know their history, 1757-1949 wasn’t about developing India, it was about exploiting it. And after that ended we know what’s happened in Palestine, how it was occupied and facilitated into the hands of the Jewish people, such that Muslims now live on only 21% of the then available land. These actions impact on people’s consciousness, and people haven’t forgotten them. So to use the word Crusades was a very poor, but deliberate choice
* this crusade, this war on terrorism, is going to take awhile."
President George W. Bush, September 16, 2001
Posted by Mark at 07:36