Support for fairer land value tax growing
Could replace council tax and business rates
Support is growing for a tax on the rental value of land. Supporters believe it would be a fairer way of collecting tax than levying it on income or enterprise, and believe it could help prevent land speculation, boost house building and reform land ownership.
A land value tax (LVT) was first proposed in the late 19th century by the American political economist Henry George. A number of countries around the world, including Denmark, plus local authorities in parts of North America have adopted forms.
LVT is based on the belief that the economic value derived from land should belong equally to all members of society because nature provides it free and ownership owes nothing to individual effort. Someone who owns land near to where new shops, transport links and housing are to be built, for example, will be worth more, despite no effort on their part.
Full rental value
LVT supporters believe that those wanting the exclusive use of land should pay the full rental value to the wider community through a tax paid to the government. They argue that LVT would lead to a more efficient land market as it would oblige landowners to develop vacant and under-used land or to make way for others who will. It would also prevent tax avoidance or evasion as land, two-thirds
of which in the UK is owned by just 0.28 per cent of the population, cannot be hidden.
George’s ideas were advocated by Winston Churchill and a smaller version of LVT formed part of Lloyd George’s 1909 People’s Budget. The Labour government included LVT in the 1931 Finance Act but the subsequent national government, dominated by the Tories, scrapped land valuation and thus made the collection of the tax impossible.
In 2013, Green MP Caroline Lucas was unsuccessful with her private member’s bill that sought parliamentary backing for research on “the merits of replacing Council Tax and non-domestic rates in England with an annual levy on the unimproved value of all land”.
The Green Party, Lib Dems and Co-operative Party included LVT in their manifestos at the 2015 general election. Labour leader Jeremy Corbyn has expressed support for LVT.
Pilot scheme
Last month a report by the London Planning Assembly Committee made three recommendations. They were: to assess powers needed to implement and operate a LVT that would replace council tax, business rates and stamp duty; commission an economic feasibility study in a defined area of London; and then implement LVT in a limited area.
The mayor of London, Sadiq Khan, has responded positively, saying: “The idea of a land value tax pilot is a good one.” Khan is set to discuss the idea with the Treasury as he does not have the powers to implement the recommendations in full.
The shadow secretary of state for housing, John Healey, MP for Wentworth and Dearne, has now said he is “interested to see how a wide range of ideas like LVT might, at a time when developers and speculators under-use land, shake up the system and help build the genuinely affordable homes we need”.


Lucas meanwhile remains committed to LVT and believes that in addition to it being “a replacement for regressive forms of taxations it has the potential to reform the scandalous shape of land ownership such that land is distributed more fairly”. 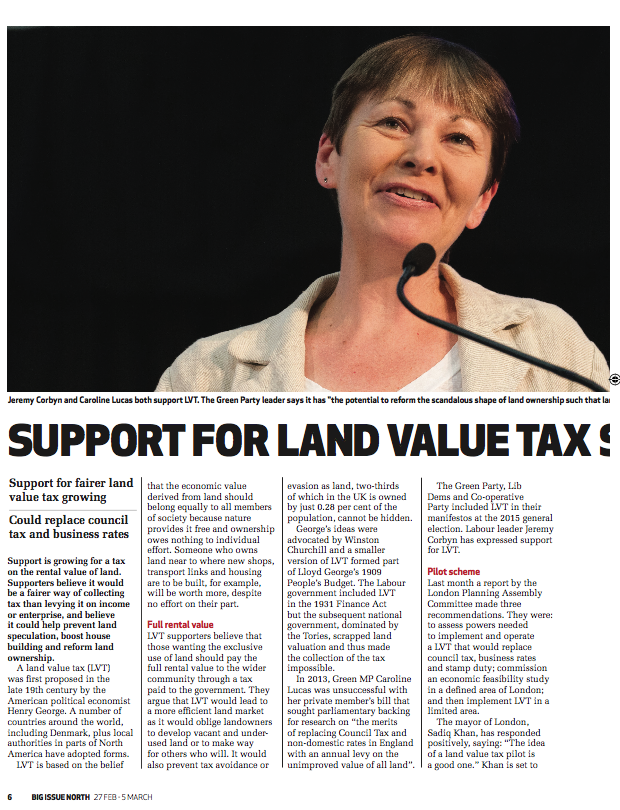