In March 2015, Unite unveiled the world’s first dual-purpose trade union banner, whereby historical images of a Derby strike pre-dating the Tolpuddle Martyrs have been combined with a twenty-first century communication Quick Response (QR) code. When scanned by a mobile phone this leads people to a website which encourages them to get involved by informing them of the nature of the protest.
The banner states We Honour the Derby Silk Workers 1833-34 and is carried on the annual commemorative march organised each weekend before May Day by the Derby Trades Union Council.
Honouring the sacrifices made by early trade unionists, the banner pays tribute to a moment in history when up to 2,000 Derby silk workers left work in November 1833 to June 1834. Following the repeal of the Combination Acts in 1824, the Grand National Consolidated Trade Union, in which Robert Owen was prominent, was established with an important branch in Derby that included weavers, iron workers, builders and silk thrusters.

When silk manufacturer, Mr Frost, discharged one of his employees, his fellow workmates walked out in support. Within a week 800 people, in a town of 24,000, were affected. When many local employers then declared they would not employ trade unionists, another 500 walked out and by February the numbers had leaped to 2,000. Attempts to persuade strike-breakers imported from London led to many strikers being imprisoned.

The strike continued for many months but eventually collapsed as starvation set in. Many strikers were subsequently victimised and never worked in their trade again. Nevertheless, in late 1834, the Dorchester Agricultural Labourers at Tolpuddle took up the struggle for trade unions, which only exist today because of the sacrifices made by the likes of the Derby silk workers, Tolpuddle Martyrs and London Dockers of 1889.

In 1934 a plaque was erected by Derby Trades Union Council that commemorates the struggle of Derby Silk Workers a hundred years earlier. It is mounted outside the Silk Mill Museum. 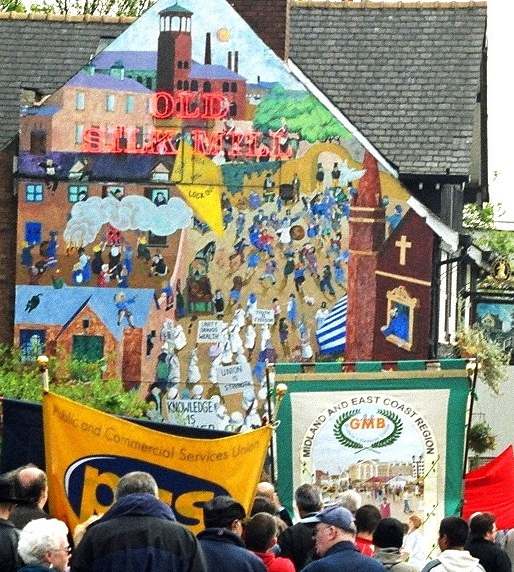