King Teds 'the best ever in Sheffield' 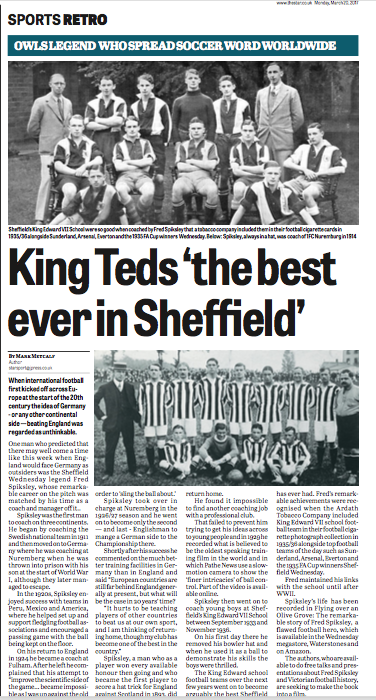 When International football first kicked off across Europe at the start of the twentieth century the idea of Germany - or any other continental side — beating England was regarded as unthinkable. One man who predicted that there may well come a time like this week when England would face Germany as outsiders was the Sheffield Wednesday legend Fred Spiksley, whose remarkable career on the pitch was matched by his time as a coach and manager off it.

Spiksley was the first man to coach on three continents. He began by coaching the Swedish national team in 1911 and then moved on to Germany where he was thrown into prison with his son at the start of World War I. They later managed to escape.

In the 1920s, Spiksley enjoyed success with teams in Peru, Mexico and America, where he helped set up and support fledgling football associations and encouraged a passing game with the ball being kept on the floor.

On his return to England in 1924 he became a coach at Fulham, where after he left he complained that his attempt to “improve the scientific side of the game… became impossible as I was up against the old order to ‘sling the ball about.’ “

Spiksley took over in charge at Nuremberg in the 1926/27 season and he went on to become only the second — and last - Englishman to mange a German side to the Championship there. The match Interviewed shortly after his success he commented on the much better training facilities in Germany than in England and said “European countries are still far behind England generally at present, but what will be the case in 20 years’ time…….It hurts to be teaching players of other countries to beat us at our own sport, and I am thinking of returning home, though my club has become one of the best in the country.”

Spiksley, a man who as a player won every available honour then going and who became the first player to score a hat trick for England against Scotland in 1893, did return home.

He found it impossible to find another coaching job with a professional club. That failed to prevent him trying to get his ideas across to young people and in 1929 he recorded what is believed to be the oldest speaking training film in the world and in which Pathe News use a slow-motion camera to show the ‘finer intricacies’ of ball control. Part of the video is available online.

Spiksley then went on to coach young boys at King Edward VII School between September 1933 and November 1936. On his first day there he removed his bowler hat and when he used it as a ball to demonstrate his skills the boys were thrilled. The King Edward school football teams over the next few years went on to become arguably the best Sheffield has ever had. Fred’s remarkable achievements were recognised when the Ardath Tobacco Company included King Edward VII school football team in their football cigarette photograph collection in 1935/36 alongside top football teams of the day such as Sunderland, Arsenal, Everton and the 1935 FA Cup winners Sheffield Wednesday. Fred maintained his links with the school until after WWII.

Spiksley’s life on and off the pitch has been recorded in FLYING OVER AN OLIVE GROVE: THE REMARKABLE STORY OF FRED SPIKSLEY,  a flawed football hero, which is available in the Wednesday megastore, Waterstones and on Amazon. The book has been highly praised by such as Henry Winter, Gordon Taylor, Marti Perarnau, Colin Murray, Chris Dawkes, Paul Hawksbee and many more. The authors, who are available to do free talks and presentations about Fred Spiksley and Victorian football history, are seeking to make the book into a film.