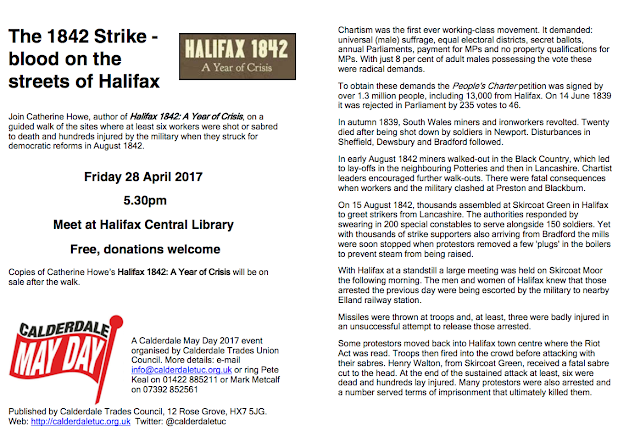 The 1842 Strike - blood on the streets of Halifax

Join author Catherine Howe on a guided walk of the sites where, at least, six workers were shot or sabred to death and hundreds injured by the military when they struck for democratic reforms in August 1842.

Chartism was the first ever working-class movement. It demanded: universal (male) suffrage, equal electoral districts, secret ballots, annual Parliaments, payment for MPs and no property qualifications for MPs. With just 8 per cent of adult males possessing the vote these were radical demands.

To help obtain these demands the People's Charter petition was signed by over 1.3 million, including 13,000 from Halifax. On 14 June 1839 it was rejected in Parliament by 235 votes to 46.

In autumn 1839, South Wales miners and ironworkers revolted and twenty died when they were shot down by armed soldiers in Newport. Disturbances in Sheffield, Dewsbury and Bradford followed. Meanwhile, whilst industrialised workers, including many children, continued to be killed in factories, mills and mines, Parliament also remained indifferent to their fate.

In May 1842, a three million strong petition was handed into Parliament and again swiftly rejected.

In early August 1842 miners walked-out in the Black Country, which led to lay-offs in the neighbouring Potteries. Within days, workers in Lancashire were being laid-off. Spotting an opportunity to direct the situation the Chartist leaders incited more walk-outs. There were fatal consequences when workers and the military clashed at Preston and Blackburn

On 15 August 1842, thousands assembled at Skircoat Green just outside Halifax to greet strikers from Lancashire. The authorities had decided to meet force with force and had sworn in 200 special constables to serve alongside 150 soldiers. Yet with thousands also arriving from Bradford to support the strikers then this force was insufficient to prevent the mills from being stopped by protestors, who entered and removed a few bolts or 'plugs' in the boilers so as to prevent steam from being raised.

With Halifax at a standstill a large meeting was held on Skircoat Moor the following morning. The men and women of Halifax were aware that those arrested the previous day were being escorted by the military to nearby Elland railway station.

Missiles were thrown at troops and, at least, three were badly injured in an ultimately unsuccessful attempt to release those arrested.

Afterwards some of the crowd moved back into Halifax town centre where the riot act was read and troops, still smarting from the humiliation that morning, fired into the crowd before attacking it with their sabres. Henry Walton, from Skircoat Green, received a fatal sabre head cut. By the time the sustained attack had ended hundreds had been injured and, at least, six were dead. Many protestors were also arrested and a number served terms of imprisonment that ultimately killed them.

Catherine Howe is the author of HALIFAX 1842: A Year of Crisis, which superbly details these fateful events.

On Friday 28 April at 5.30pm Catherine will lead a 90-minute guided walk round some of the locations where - in the battle for greater democracy - many lost their lives and  afterwards there will be a toast to their heroic efforts.