Unite’s Debi Bell's participation in a Unite delegation to Colombia in June may have reduced her to tears - but it has also confirmed how vital international solidarity is to progressive forces in the South American Republic.

Debi, who sits on the Unite national food drink and tobacco sector committee, is the unions East Midlands region rep within Sainsburys, where she has worked for 24 years as a commercial assistant.

Along with eight other Unite activists, Debi travelled to Columbia to discover why it is the most dangerous place anywhere for trade unionists and human rights defenders and how Justice for Columbia is providing essential international support that has led to some improvements.

The trip coincided with the rural workers union, FENSUAGRO's, 11th annual conference in Bogota and whose 415 delegates had part of their travel costs paid by the agricultural sector of their sister union, UNITE.

Union vice-president Huber Ballesteros and over 100 other members are in jail, often without any charges against them. The union helped lead the 2013 mass strike that mobilised over a million people on street protests against the devastating impact of free-trade agreements, privatisation and inequality-driven poverty.

The Unite delegation later met human rights and prisoners support groups as well as trade unionists from the private and public sectors. Debi was subsequently amongst the guests of the Mothers of Soacha, whose sons were killed by paramilitary forces including two 19 year olds studying as engineers. “My son is studying engineering and is 19. I was tears.”

There was additional upset in Cauca when Debi listened to a young farmer who the paramilitaries had targeted for assassination after they told him, without any evidence, they considered him a member of the FARC rebels, who have been fighting the government for fifty years. "His family had lived on the land he owned for generations and as he did not want to appear a coward he was staying put. I don't know if he remains alive.

“He told his tale because he wants to alert people from abroad and believes that international pressure and solidarity is vital in creating the conditions for ending human rights abuses in Columbia.

Having familiarised herself with the situation in Columbia, Debi was part of the Unite delegation that met the British Ambassador in Bogota and then had meetings with the High Commissioner and Ministry of Defence from the Columbian Government.

“We presented them with our findings. This included the desire from everyone we met for the Government to respond positively to any fresh FARC ceasefire, which has since been announced and welcomed by 29 British MPs from four different parties after the Columbian Government said they would also be taking steps to de-escalate the armed conflict.

“I felt we were listened to. I certainly hope so and the Columbian Ambassador has agreed to meet us when he visits Britain and that will be an opportunity to see if progress is being made.

“But there is still plenty to do. I would appeal to all Unite branches to affiliate to Justice for Columbia, which is doing marvellous work,” said Debi, who is happy to speak about her Columbian visit at Unite branch meetings across the East Midlands. 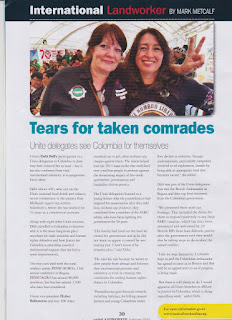