Taken from The Golden Boot: Football’s Top Scorers by Mark Metcalf and Tony Matthews and published by Amberley in 2012. 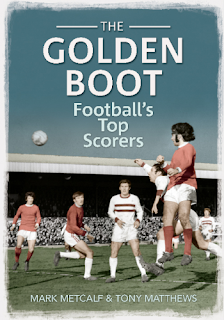 3rd in Division One

Famous for scoring a hat trick at the 1953 FA Cup Final Mortensen was the cutting edge of an exciting, entertaining forward line, in which Stanley Matthews was the outstanding talent with the Blackpool centre forward not too far behind.

Born in South Shields, Mortensen was lucky to survive the Second World War when his Wellington Bomber crashed, killing two of the four-man crew and leaving the other with just one leg. Signed by Blackpool in 1937, he had failed to make his first-team debut and his chances of doing so looked dim when the doctors told him the crash meant he should avoid heading the ball as it could cause serious health problems. Ignoring this advice, soon afterward he played with success for the RAF side before appearing in a number of friendly games for the Seasiders.

On the resumption of football in 1945/46, Mortensen scored on his debut away to Wrexham in the FA Cup. It was not going to be the last goal he scored in the famous competition, and in 1947-48 he scored in every round, including a blistering semi-final hat-trick to overturn a Spurs lead that lasted until the 86th minute of the match. Then, in the final, he put Blackpool back into the lead by converting a Hughie Kelly cross, only for Matt Busby’s Manchester United to come out 4-2 winners at the end of a match many felt was the best FA Cup Final ever seen at Wembley.

Blackpool had finished the 1949/50 season disappointingly. Seemingly set for a first ever Division One title success, only one game in the last ten were won, leaving Portsmouth to come through and retain their title. Spurs had gained promotion at the end of the season, and with their ‘push and run’ tactics were expected to do well in the top flight. So a first day encounter at White Hart Lane might have been something to avoid, yet with Matthews at his best Blackpool stormed to an impressive 4-1 victory, Mortensen grabbing his first goal of the season.

At Burnley, Mortensen was so badly injured that the referee Bill Evans suggested he leave the pitch rather than limp out the remaining 20 minutes on the left wing. Refusing, he assisted his side to a 0-0 draw but suffered by being unavailable for the next two matches. There was further disappointment when he then learned he had been overlooked at centre forward for England in their subsequent international match against Northern Ireland. England had done badly at the 1950 World Cup Finals, even losing 1-0 to the USA and the selectors had decided to take a look at a new man in Derby County’s Jack Lee. Mortensen had made his international debut in May 1947, when in a match that Matthews rated as one of the greatest he had ever played in England beat Portugal 10-0 with Mortensen grabbing four.

Mortensen grabbed his second goal of the 1950/51 season in Blackpool’s tenth League game, yet according Clifford Greenwood in the Blackpool Evening Gazette he ‘was still that half yard slower off the mark.’ He then also played poorly against Chelsea, but with the game tied at 2-2 his non-stop effort paid off when presented with a simple chance he netted from six yards out for the winner. Continuing his bustling battling performances Mortensen managed a goal at St James’ Park but should have done better, missing two golden chances that Greenwood reported showed ‘that for now his old magic has forsaken him.’ Yet with Alan Withers coming into the side and scoring five goals in his first four matches Blackpool could afford to wait until Mortensen found his shooting boots.

When he did, he scored twice at Highbury in a 4-4 thriller. Then at home to Liverpool Allan Brown’s perfect pass set up his first and he hit ‘number two with all the old venom in the shot.’

With Blackpool nine points behind leaders Middlesbrough in early January, hopes of any success rested on the FA Cup. Mortensen managed four goals as Charlton and Stockport were beaten to put Blackpool. The goals seemed to kick-start his season, and at Aston Villa on February 3 1951 he was one of the away side’s three scorers in a match that had the whole crowd applauding Matthews as he left the field so wonderfully had the wing man played. Derby County then had to twice pick Mortensen’s efforts out of the net - his second a blistering free kick -  before he scored for the third consecutive game as Chelsea were beaten 2-0 at Stamford Bridge. It was an opportunist’s goal, following up when Brown’s shot got stuck in the mud.

There was now no stopping Mortensen, Portsmouth, Newcastle, Bolton and Everton all conceding goals to make it seven consecutive league games. In between, the northeast lad had also set up a place in the FA Cup Final against Newcastle United by putting his side a goal up in the replayed semi-final with Birmingham City. ‘Keeper Gill Merrick had got both hands to his shot but the pace was simply too strong to prevent the ball rolling over the line as Blackpool advanced 2-1.

Mortensen made it eight League games in a row when he scored at Burnden Park. It was a fierce encounter; Mortensen had deflected Bob Langton’s shot into his own net and also scored Blackpool’s goal when with two minutes left he followed up another Brown shot to give his side both points. It was his twenty-fifth League goal of the season.

Goals number twenty-six and seven  weren’t long in the making, Stoke suffering a 3-0 defeat that could have been much greater. Away at WBA and Mortensen made it ten games in a row. He left it late, but after playing an important part in both Jackie Mudie’s goals, the Blackpool centre-forward made it 3-0 with just two minutes remaining. Ten in a row then became eleven, but with Blackpool’s players now doing their best to ensure they were fit to play at Wembley Huddersfield won much more comfortably than the 2-1 scoreline suggested.

Next game up was Middlesbrough and Mortensen failed to score. Not that he ever had any chance of doing so as he was on England duty, earning high praise for ignoring a jaw injury to lead an ultimately unsuccessful fightback as Scotland won a fine match 3-2.

One week later, and for his twelfth League game in a row, Mortensen was again on the Blackpool scoresheet as Sheffield Wednesday won 3-1 at Hillsborough. It was his thirtieth of the season, a brilliant effort but one he might well have traded for just one match winning effort at Wembley, but playing poorly Blackpool lost 2-0 to two Jackie Milburn goals for Newcastle United. Consolation for one of the losing side, captain Harry Johnston, came in the form of the Football Writer’s Association Footballer of the Year Award.

Mortensen was, of course, to gain his FA Cup winners medal just two seasons later when, inspired by Matthews, Blackpool recovered from being 3-1 down to Bolton to win 4-3. Mortensen by scoring a hat trick became the first, and to date, only player to achieve the feat at a Wembley FA Cup Final.

Mortensen also suffered further Wembley disappointment in 1953, playing alongside three of his Blackpool team-mates as Hungary crushed the home side 6-3. It was to prove his final international match, leaving him with 25 caps and 23 goals. After leaving Blackpool in 1955 Mortensen played for Hull, Blackpool and Southport before spells with Bath and Lancaster City in non-league football. Returning to Bloomfield Road as manager in 1967 he was denied promotion on goal average in 1968. He died in May 1991 and fine player that he was it is entirely appropriate that a statue of him has been erected outside Blackpool’s ground.

Tommy Lawton described Mortensen as "the most dangerous attacker of his day. With that curious, energetic run he burst open more defences than any other man of his time, and I don't think I know a player who was faster off the mark than this Blackpool Bombshell was. Knocks and injuries meant nothing to Morty."
Posted by Mark at 01:44