Mary Seacole blue plaque with statue to follow in spring

There is a blue plaque commemorating Jamaican nurse  - and heroine of the Crimean War - Mary Seacole at 14 Soho Square, London W1, where she lived in 1857. 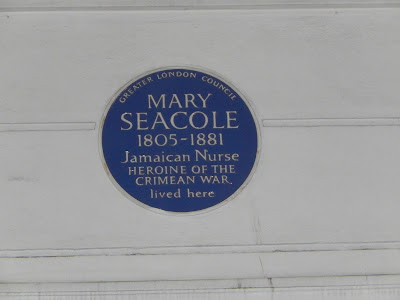 Voted the greatest black Briton in 2004, Seacole, who was born in 1805, was of Scottish and Creole descent. Mary's mother was a free black woman who by practising as a 'doctress' was able to pass on her nursing skills and understanding of local herbal remedies to her daughter.

In her teens Mary travelled to England with relatives and over the following years journeyed regularly between the two countries and in 1836 she married Englishman Edwin Horatio Hamilton Seacole. Sadly, Edwin died just eight years later and then in 1850, Mary nursed victims of the Kingston cholera epidemic. Three years later, Mary cared for victims of a yellow fever epidemic in Jamaica. Following which she was invited by the medical authorities to supervise nursing services at the headquarters of the British Army in Kingston.

In 1854, England and France joined forces with Turkey to invade Russia. On 21 October, Florence Nightingale departed to Scutari, accompanied by 38 nurses. Mary began repeatedly offering her services to care for troops in the Crimea, but without success. She was left heartbroken and considered that she might be facing rejection because of the colour of her skin. She put such thoughts aside and decided to fund her own passage to the Crimea and on her arrival she visited Florence Nightingale. By around July 1855 she and a friend of her late husband, Mr Day, had organised the construction at Balaclava of the British Hotel and store for the sale of food and drink to soldiers. This facility was to provide soldiers of all ranks with accommodation, good nourishing food, other provisions and nursing care of a high standard. Testimonies from soldiers, along with independent accounts from journalists, doctors and other visitors, testify to Mary Seacole's great qualities as a nurse and doctress.

In March 1856 when the war ended suddenly Mary was placed in severe financial difficulties as the stores she had recently purchased were now redundant. On her return to England she was saved from bankruptcy through the donations of well wishers. Thereafter she became increasingly celebrated. Her portrait was painted by Albert Charles Challen in 1869 and when she died in 1881 her estate was valued at over £2,615, which demonstrates that by the time of her death she had recovered from her earlier financial troubles.

In 1915 when the Crimean War Memorial was erected in London near the junction of Lower Regent Street and Pall Mall it included a Florence Nightingale statue but not one of Mary Seacole. On the centenary of the Crimea War, Jamaica formally recognised Seacole when the Jamaican Nurses' Association named their Kingston headquarters after her. In 1973 her decaying grave at Kensal Green was restored by an association of Jamaican women in London.

In 1985 the Greater London Council placed a blue plaque on her former home at 157 George Street, London W1 and when this building was demolished the plaque was moved to its present location in Soho Square.

In 2003 former London MP Clive Soley, now Lord Soley, launched an appeal for funds to erect a statue in central London. In late November 2015 the final funds to make this possible were obtained when the Government made a surprise donation of £240,000 to the Mary Seacole Memorial Statue Appeal (MSMSA), which had raised more than half a million pounds before being hampered in their efforts when they were presented with an unexpected huge bill for installation costs.

The 15-foot plus bronze statue that has been designed by sculptor Martin Jennings will be the first statue of a named black woman in Britain. It will be installed - along with a memorial garden to commemorate health workers killed in conflict zones or combating disease  - in the grounds of St Thomas' hospital, opposite Parliament. It is sure to become a significant London landmark.

The Community Practitioners and Health Visitors Association (CPHVA), which is a section of UNITE, has long campaigned for a Mary Seacole statue. Prominent in this campaign has been Professor Elizabeth Anionwu, CBE, who is vice-chairperson of the MSMSA and vice-president of UNITE/CPHVA, who said, "For all the thousands of people who have donated pennies and pounds to this appeal, for which we raised over £500,000, it is wonderful news that we now finally have all the monies we need. At last we know that by spring next year the statue to this remarkable woman will be on display.”

For more on Mary Seacole there is a book by Professor Anionwu: A short history of Mary Seacole - a resource for nurses and students. 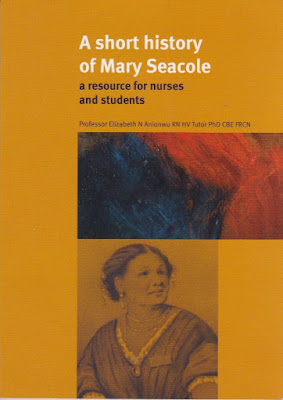