Dorset general farm worker John Burbidge has followed in the footsteps of the Tolpuddle Martyrs by seeking to unionise agricultural workers in order to win better terms and conditions. John, who chairs the Tolpuddle Unite Food, Drink, Agriculture and Transport branch, covering all of Dorset, is approaching retirement but that is only going to mean more union work in the future!

John left school at 15 and joined the National Union of Agricultural and Allied Workers in 1968 when he started attending the Dorset Farm Institute on day release.

“My parents were tenant farmers, who in 1960 took out a mortgage to buy a 50 acre dairy farm in Yetminster, near Sherborne. I worked part-time at my father’s and my uncle's much larger dairy farm.”

John later worked for five years at a Yeovil tannery, becoming a shop steward and the stewards ‘convenor. After studying politics at University he was employed at a foundry. He was sacked for trade union activities. Whilst subsequently working at Sterlings, Crewkerne, John became a AUEW shop steward. “I learned lots as the workers held a march as part of the campaign to save Crewkerne NHS Hospital, as well as organising a 2-day successful occupation backing up the national AUEW pay and conditions claim.”

After his marriage, John, who has two daughters and five grandchildren, returned to farming and run the family sheep and cow suckler farm in Yetminster. For almost three decades he also worked  on nearby farms, milking cows and on general farm work.

“A friend and political / trade union activist persuaded me to join Unite over a decade ago. I was a disempowered NFU member, “ he says - adding some farmers opposed the Agricultural Wages Board abolition. “Many NFU members are part-time farm workers, with most of their income coming from working on other farms or in other industries.

“I am a Unite trade union representative and a political activist because people need justice and socialism. We will only achieve this when we unite and oppose oppression of all kinds, here and in all countries.”

John has served on the Unite SW regional committee and on the regional and national Industrial sector committee for food drink and agriculture. He is a Unite member of the HSE agricultural advisory committee.

On drawing his state pension, John quit milking cows in 2017 and began working part-time as a self-employed general farm worker. He principally does fencing and hedging. Over the next 15 months John will be stepping down from some of his Unite positions. Thankfully, his experiences won’t be lost to the labour movement.

“I've lived in West Dorset virtually all my life. I know many local people.   I intend training as a Unite Companion - an experienced workplace rep prepared to assist the Union in representing individual members in unorganised workplaces.

“The paradox for many farm workers always has been the problem of blacklisting and so many activists have been people who are older. Because of the scourge of blacklisting in farming, many NUAAW branch secretaries were teachers, such as the Higdons at Burston, posties and railway workers.

“Workers in Food, Drink and Agriculture need a strong and good union, now more than ever. That union is Unite.” 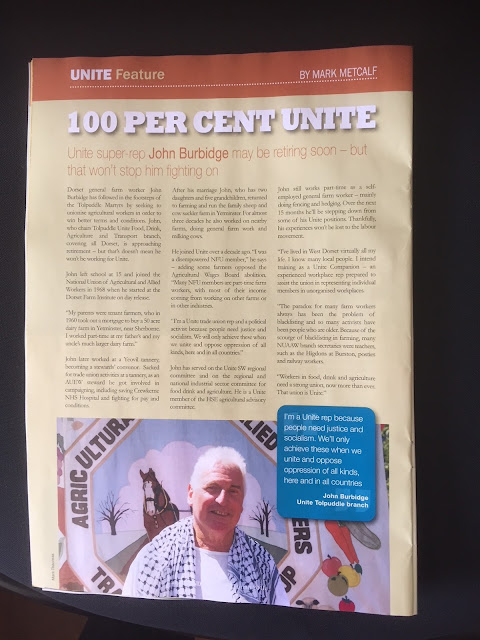