INVITE MOHAMMAD TAJ TO SPEAK AT YOUR UNION BRANCH OR LABOUR MOVEMENT MEETING
Unite Education has published a 20,000 word biography by Mark Metcalf on Bradford bus driver Mohammad Taj, who is now available to speak at labour movement meetings. Below is the foreword to the book, which can be downloaded for free at:- https://markwritecouk.files.wordpress.com/2018/09/6328dpmt2018-taj-booklet-web.pdf
Taj can be contacted on 07929 004831
Mark Metcalf is also available to speak and can be contacted on 07392 852561 ————————————————————————————————————————Foreword to the book by Diana Holland
Unite Assistant General Secretary for Transport and Equalities Executive Board member of the International Transport Workers Federation
“The powerful story of Mohammad Taj is a true inspiration. I strongly recommend it to everyone.
Elected TUC President on 11 September 2013, the first Muslim and the first South Asian President, Mohammad Taj’s story is an incredible journey. When thousands of people saw Taj’s photo which featured in a poster campaign by the Joint Council for the Welfare of Immigrants, it said:
“My name is Mohammad Taj. I am an immigrant. For 40 years I have been a bus driver and committed trade unionist fighting for the rights of ordinary working people”
Now, thanks to this excellent booklet, they can find out so much more.
From his early life in Kunjar Mal, a small agricultural village in Pakistan-administered Kashmir, to life in Bradford working in the textile mills and then the bus industry, active in the TGWU now Unite, Mohammad Taj has exposed shameful exploitation and discrimination, won major advances for equality and justice, and supported workers in struggle everywhere.
As we elect delegates to the TUC Black Workers Conference and Committee, celebrate the achievements of Unite Regional and National Black, Asian Ethnic Minorities Committees and Conferences, and the vital impact of BAEM shop stewards, reps and delegates at every level of the union, including on the Executive, we can and must pay tribute to Mohammad Taj. His dedication, his experience, his genuine warmth have all played a part, but above all it has been his ability to organise beyond short-term setbacks, ill-informed opposition, outright racism and discrimination, and his ability to build solidarity, unity and alliances within and beyond the workplace, that have in reality made a difference to millions of people’s lives worldwide.
Mohammad Taj’s time as TUC President encompassed all he has stood for all his life. A TUC President on the picket line supporting so many workers. A TUC President expressing solidarity and support at the TUC Women’s Conference for women’s struggle for equality, in the context of Muslim women’s struggles. A TUC President supporting equality for all and explicitly for disabled workers and LGBT workers. A TUC President addressing the Labour Party Conference as world statesman, bus driver, trade unionist and grassroots Labour activist at every level. A TUC President and a powerful effective black and Asian trade union leader.


I am proud to pay this tribute to a very special person, who has achieved so much himself. But above all, Mohammad Taj’s legacy is in others – black, Asian ethnic minority men and women workers and trade unionists as a powerful progressive force in the country – and today’s workers having confidence that in the struggle against injustice, they are not alone. Thank you, Taj.” 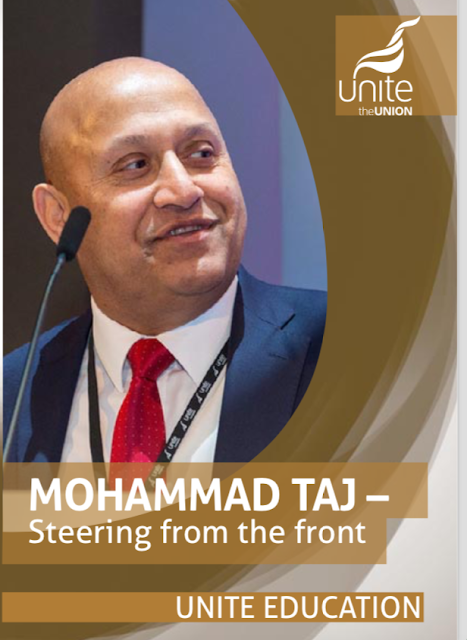