THE BATTLE OF BAMBER BRIDGE

THE BATTLE OF BAMBER BRIDGE

Ye Olde Hob Inn in Bamber Bridge is a 400-year-old Grade II listed former coach house with a thatched roof. It contains a grill, restaurant and a well stocked bar. The food our group was served was affordable good home cooked food. There was also plenty of it.  The Inn is ideal for some rest and relaxation.

It’s all a distant cry from Thursday June 24, 1943 when several American black soldiers, based at the nearby headquarters of the 1511th Quartermaster Truck regiment, objected to being informed that they she could not be served beyond the then legal closing time of 10pm.

Tension was high amongst the black servicemen, who as was the case throughout World War II were segregated from their white counterparts and frequently suffered great disparities in their treatment. This followed a riot in Detroit four days earlier that had left 25 black people dead, 17 shot dead by the police and following which riots spread to other cities.

What happened next never appeared in any official war chronicles. But according to Anthony Burgess, author of Clockwork Orange, who was a lecturer at a nearby college after the war, "there was a battle..in Bamber Bridge, which was totally black in sentiment such that when the US military authorities had demanded that pubs impose a colour bar, the landlords had responded with Black Troops Only signs."

A longer account of events appeared in a quarterly magazine After the Battle. It was written by military defence analyst and History Professor Dr Ken Werrell. His meticulous research included interviews with survivors.

On hearing that there was an incident at the pub, two white military policemen (MPs) went to investigate. There was a deep mistrust between the segregated black troops and the MPs, whose appearance  was certain to be poorly received, especially when they attempted to arrest one of the black servicemen for having no pass. A crowd that included some local Britons surrounded and abused the MPs, one of whom drew his gun before they left to seek reinforcements.

When further arrest attempts were later made the result was a black solider was shot before the black soldiers, on arriving back at their base, began taking arms to defend themselves. In the firefight that followed one black soldier, Private William Crossland, was shot dead. Two other black soldiers and one white were shot during what was termed a mutiny.

When calm was later restored over twenty men from the depot were later found guilty of charges that included resisting arrest and illegal possession of rifles. Sentences ranged from three months up to 15 years although in the event these were later reduced and only one served more than a year. 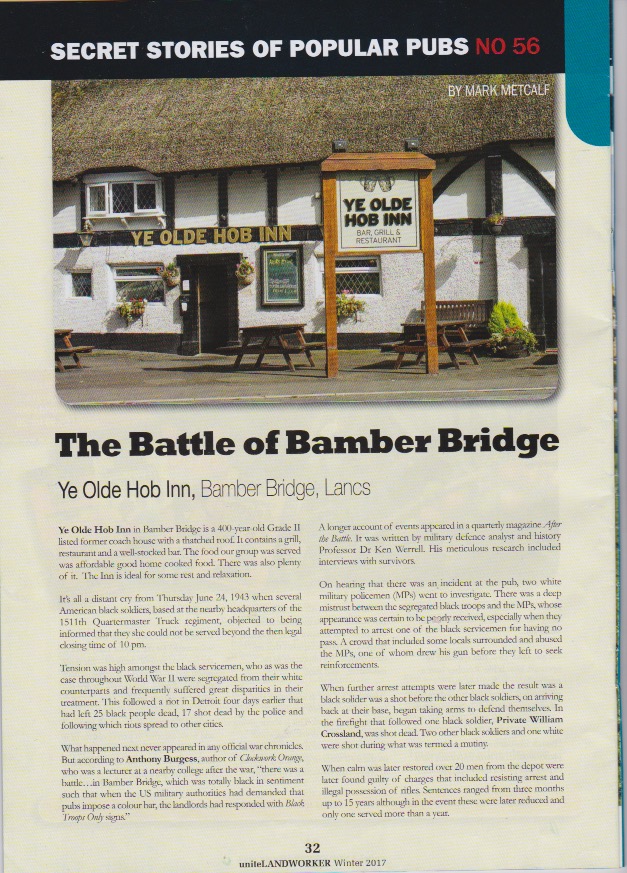