Dare to Be Free: women in the trade unions past and present book by Mary Quaile Club

Dare to Be Free: women in the trade unions past and present is a short informative book that has been published by the Mary Quaile Club, which aims to organise ‘regular discussions on working class history and its links with contemporary political issues facing working people in Tory Britain.’

The first half of the book, which is written by Michael Herbert, explores how Mary Quaile, who started work as a shop assistant at aged 12, worked tirelessly to organise low paid women into trade unions in order to improve their wages and conditions.

Mary, born in 1886, became joint secretary of the women's Trade Union League in 1903 where she worked closely with the trade unionist and women’s rights organiser, Mary Macarthur.

In 1911, Quaile began working as an assistant organiser for the Manchester Women's Trades Union Council, which soon after helped organise a successful four month strike by women at Bradford Flax Mill on Gibbon Street, Manchester. In 1916 Mary helped establish a new union amongst women woodworkers and succeeded in getting substantial wage increases for many women.

In 1918, Mary became the National Women's Organiser for the Dock, Wharf and Riverside Workers' Union and she retained this post when the union became part of the Transport and General Workers' Union in 1922. This was the biggest union in the country. Mary stayed in post up until 1933.

According to Herbert "Mary needs remembering as she was a leading female trade unionist in her day. The issues she so successfully tackled of low pay and irregular work remain alive and so Mary's work has great relevance today. "

The second half of the book is written by Bernadette Hyland. It consists of interviews with ten contemporary active grass roots women trade unionists including Unite's Nilufer Erdem, who has been involved with the Fair Tips campaign that targeted Pizza Express and who said: "only through the union can you protect your rights."

The book’s launch on 4 June 2016 was followed by the performance of the Dare to Be Free play that was written by Jane McNulty. The play explains how waitresses in a Manchester cafe in 1908 are ready to strike for the same things as fast food workers in 2016/17, namely proper pay, decent working conditions and the right to organise collectively.

The audience included Unite hotel workers branch members. "The play was very powerful. It captured perfectly what workers’ experience everyday in the hotel sector and where those who openly join Unite are marked out by their employers for victimisation. I am looking forward to reading the book on Mary,” said Khadija Najlaoui.

Dare to be Free: Women in the Trade Unions Past and Present is available online from News from Nowhere bookshop at http://www.newsfromnowhere.org.uk/books/DisplayBookInfo.php?ISBN=9780993224713

Bernadette Hyland  would be delighted to speak at meetings and conferences about the issues raised by her research for the pamphlet and can be contacted by email:  lipsticksocialist636@gmail.com 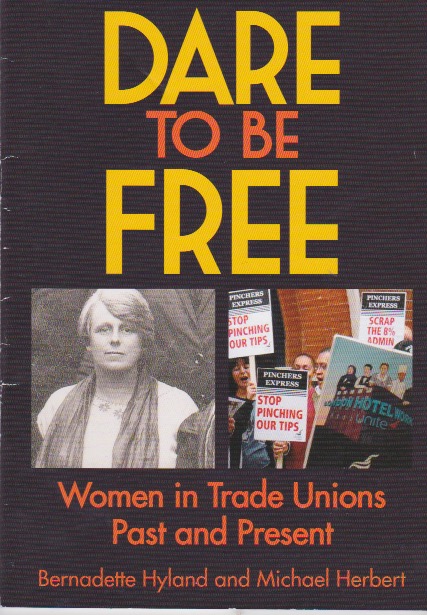