Taken from my book on Frank, which is available at:- https://www.amazon.co.uk/Frank-Swift-Manchester-England-Legend/dp/1780912005


Writing in his autobiography Swift recalls the excitement, ‘What a Christmas Day it was. I really began to believe in Santa Claus when I reported to the Exchange Station to join the party for Derby. Everybody was very helpful and understanding at my nervous excitement, and I listened intently to all the advice this great bunch of lads handed out.’

Derby were one of the best sides of the 1930s and possessed a fine attack – it later being argued that an emphasis on scoring goals cost the Rams a first major trophy – and Swift was set for a baptism of fire.

City, backed by a good number of fans, were to lose their second consecutive match, beaten 4-1. Derby’s centre-forward Jack Bowers had finished as Division One’s top scorer the previous season with 35 goals and he was to repeat the feat in 1933-34 with 34 goals. A powerful player he possessed two good feet and was a constant aerial threat.

Swift was unable to prevent Bowers from scoring and blamed himself for the opening two goals saying ‘I did not keep my eye on the ball, because I was looking for Jack.’  The keeper appears to have been a little too self-critical, as the first on four minutes saw the County attack rip apart the defence in front of him to leave ‘the unmarked (Peter) Ramage with little difficulty in beating Swift’ (Derby Evening Telegraph 27 Dec 1933)

With the Rams wingers, England international Sammy Crookes and Scottish international Dally Duncan, a constant threat the away defence was given a torrid time and it was no surprise when Bowers made it 2-0. City’s new keeper then made a fine save to deny the goal predator a second from a long-range effort. There was little Swift could do, though, when on the stroke of half-time Bowers made it 3-0 in a game watched by a then record Baseball Ground attendance of 32,786.

On the restart a powerful shot by Ramage made it 4-0, but clearly determined to keep the score down Swift was in bravely at the feet of Bowers to prevent a fifth. For his sins he was knocked out, something that was to become a regular feature of the keeper’s career over the next 15-16 years. Leather football boots in the 1930s were much heavier than today, had metal studs or tacks hammered into the sole and contained a steel front toecap. A keeper kicked – accidentally or not – by a forward’s boot was much more likely to be badly injured and/or knocked out. Only the bravest could expect to make it to the top of their profession.

The crowd waited several minutes before the rudimentary treatment of applying a cold sponge to the youngster’s face paid dividends and he staggered to his feet. At 4-0 down a lesser – some might say more sensible – man might have decided to recuperate in the more relaxed surroundings of the dressing room. Swift played on. As a result he witnessed Ernie Toseland scoring Manchester City’s consolation effort. 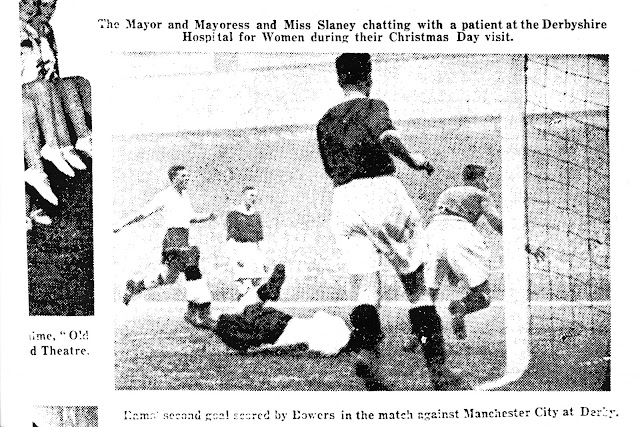 Swift’s first-team colleagues included Jack Bray, who a few weeks earlier had unknowingly met Swift as they both journeyed to Maine Road for a reserve match in which the keeper was making his debut.

The Blackpool youngster believed he had enough time to walk from the city centre to Maine Road. He became concerned after seeing fans jump on the trams, which were an important part of Manchester’s transport system until the development of the motor car led to a decision to faze them out in 1937. The formal closure date of February 1939 was however missed due to petrol problems for buses and it was not till January 1949 that the ‘last’ tram ran, by which time many lines were unusable due to the bombing Manchester sustained during the war. Trams eventually returned to Manchester in 1992.

Asking an immaculately dressed stranger Swift was relieved to be re-assured that he had plenty of time, but after continuing walking for a while his fears returned. Jumping on a tram he found himself sitting next to the same stranger. A blushing Swift offered his apologies before the pair alighted outside Maine Road and went there separate ways.

Well, not quite because when Swift entered the dressing room he found himself being asked, ‘What on earth are young doing here?’ He replied ‘I’m the goalkeeper, Sir’ and after a few seconds in shock left-half Bray introduced himself.

Bray cost City £1,000 when they signed him in October 1929 from Manchester Central, a club formed by former City director John Ayrton in disgust at the move from Hyde Road to Maine Road. Bray was to play consistently for City in over 430 first team appearances and was good enough to play for England, winning six caps and playing three times for the Football League.

Journeying home from the Baseball Ground, Swift arrived in Blackpool for a belated Christmas dinner, where he was joined by his brother Fred, by now a keeper with Oldham, as he told the whole family about ‘what I had done right, and wrong, at Derby’. Fearing he might not be playing on Boxing Day he left home at 7.15am for the 2.15 pm kick-off at Maine Road. With his family ‘as scared as I was’ his offer for them to accompany him was declined.