DECISION NEARS FOR FIRE VICTIM
Inquiry of police role in Bradford fire looms
Victim's book raised issues with 1985 blaze
The Independent Police Complaints Commission (IPCC) is close to deciding whether to investigate West Yorkshire Police’s role in the Bradford City fire disaster of 1985 in which 56 fans died.
The IPCC became involved following the release of a book on the 30th anniversary of the disaster: The Fifty-Six: The Story of the Bradford Fire by Martin Fletcher, who survived the fire on 11 May but lost four of his relatives to it.
Police failures
There then followed a letter from Fletcher’s legal representatives Leigh Day to the then home secretary, Theresa May, urging her to initiate an independent review of the evidence and arguing “police failures caused most loss of life".
These included an alleged delay of 195 seconds before evacuating fans on to the pitch and a failure by the commanding officer, Chief Inspector Charles Mawson, to investigate radio reports of a fire until his deputy forced him to do so.
The police control room in Bradford city centre is also alleged to have failed to respond quickly enough to three police radio requests for fire brigade assistance so that the brigade, stationed only three minutes away from the ground, arrived nine minutes after the fire started, by which time the all-wooden Main Stand was fully ablaze.
West Yorkshire Police subsequently referred itself in November 2015 to the IPCC. The police watchdog said it “would consider the referral before deciding whether to investigate”.
The decision to self-refer does not mean the IPCC will investigate. In November 2012, South Yorkshire Police referred itself to the organisation over its conduct at Orgreave during the Miners Strike of 1984-85. The IPCC then took until June 2015 to issue a report that cited the historic nature of events and its failure to obtain police operational orders as reasons not to proceed to a full investigation.
"Blame not apportioned"
Following the fire in 1985 a hastily arranged inquiry was held just 13 days after the forensic search of the site was completed. It lasted only five and a half days. It did not take witness statements from most survivors. All the families were represented by a barrister instructed by the Bradford Law Society.
The inquiry’s judge, Lord Popplewell, had said beforehand “blame will not be apportioned”. He concluded the fire’s cause was the dropping of a lit match, cigarette or tobacco on to litter that had collected underneath the stand. Fletcher has cast doubts on this verdict.
When Fletcher began investigating events he unearthed flaws in the inquiry and inconsistencies between what Bradford City owner Stafford Heginbotham and the club told the press. Fletcher found that Heginbotham had a string of businesses where eight similar fires had broken out and which all followed a similar pattern of spreading quickly and catching the fire brigade unaware.
When West Yorkshire Police referred itself to the IPCC, Fletcher said he was “delighted”, adding: “It is a proper testament to the open and transparent nature of modern policing.”
Now an IPCC spokesperson has stated: “We are in the final stages of this matter and will look to announce a decision in due course.”


In response Fletcher said: “It would be inappropriate to make any substantive public statements until the official decision is announced.” 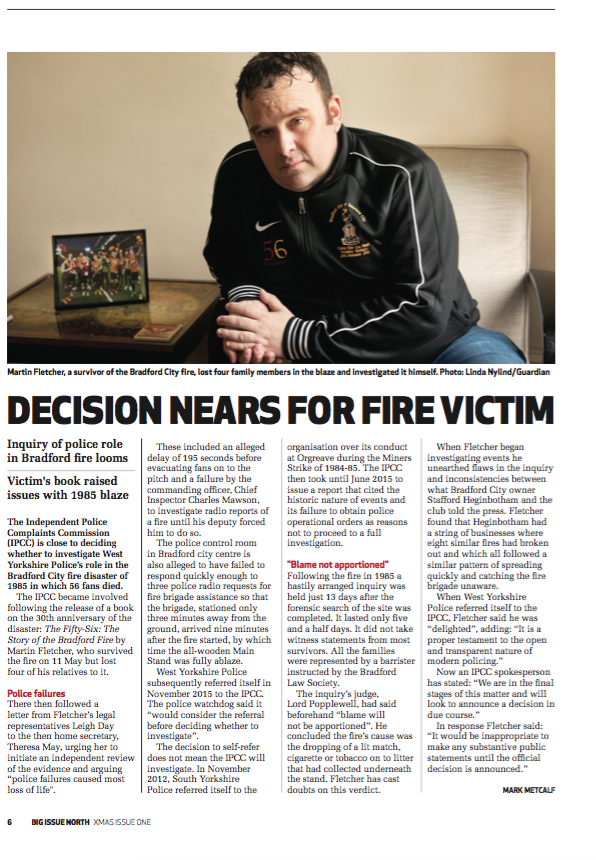