UNITE members in local government in the North East, Yorkshire & Humberside yesterday stood alongside teachers, civil servants, firefighters, transport workers and fellow council workers in striking over real-terms pay cuts.
The Trades Union Congress (TUC) has calculated that since the coalition assumed officer in 2010, public servants are on average £2,245 worse off, around £50 a week. Consequently, 450,000 people in local government currently earn less than the living wage. Increasing numbers of public sector workers are being forced to access food banks.
Yet despite the economy showing signs of recovery the government is intent on imposing below-inflation pay rises until, at least, 2018. Cameron and Clegg have rejected local government unions pay claim worth £1 an hour. UNITE members joined trade unionists from other unions in voting to take strike action and on 10 July large numbers did not turn up to work.

There were also healthy turnouts on picket lines across the North East, Yorkshire and Humberside. At Vine Street cleansing department in Huddersfield, UNITE workplace rep Kenny Lang had brought with him his pay slip from four years ago. “My pay has hardly moved since 2010 and if David Cameron was here I would ask him how I am expected to survive on under £1,400 a month less tax.” UNITE and UNISON members at the depot were united in organising a lively picket line.

There was also great unity across three unions – UNITE, GMB and UNISON - at the Westland Road Passenger Transport depot in Leeds.

“We must work together otherwise the Government can keep down our wages, which are far too low and could be boosted if there was a determination to ensure that big companies are prevented from avoiding pay their fair share of tax,” said Stacey Booth of the GMB. Over 100 firms on the FTSE share index are believed are be failing to comply with the law by avoiding their taxes and the sums involved are colossal with eBay paying just $1 million on UK sales of over £800 million last year.
Drivers and escorts at Westland Road provide an invaluable service for some of the most vulnerable people in society, transporting elderly people to day centres and disabled children to school. In recent times cuts to facilities for elderly people has increased the distance each passenger needs transporting. This has added to the stresses faced by workers. Yet since the Con Dems took charge at Westminster they and all public sector workers have experienced an 18% pay cut in real terms.
“It is incredibly disappointing,” said long-serving John Graham, “as we are being told the economy is making a recovery and surely it would be boosted by paying us an extra £1 an hour? The wages we are on it would mean we would spend all of it, thus helping to generate further economic activity. ”

Pickets peacefully attempted to persuade people not to cross, At housing construction services in east Leeds, electrician Kirsty Mills was part of a group that was able to turn round five people, one of whom then happily joined the picket line before pickets journeyed into Leeds City Centre to participate in the lunchtime demonstration and rally. 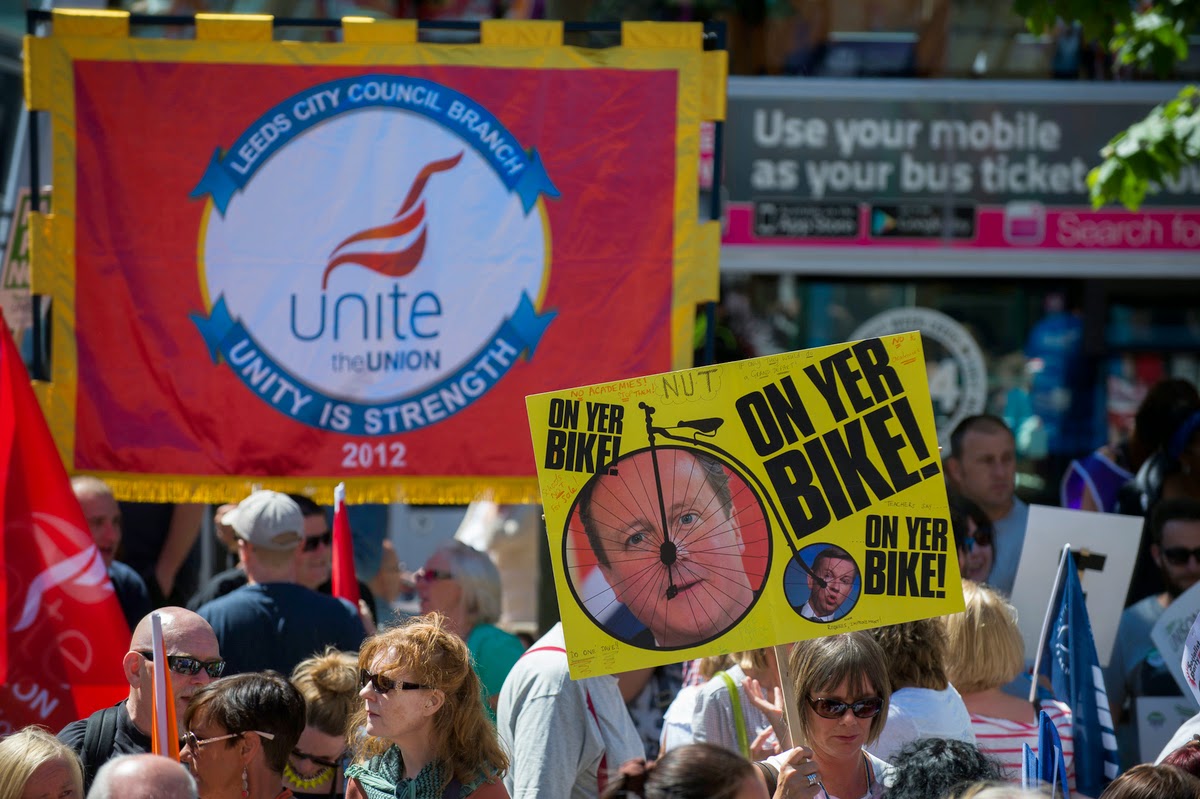 Both events were very well attended by FBU, UNITE, GMB, NUT, UNISON and PCS members.  After assembling outside the art gallery, which appropriately enough was closed for the day, 2,000 people, mostly women workers, created a lively atmosphere as they paraded through the city centre. Bus and car drivers added to the noise by sounding their horns in support. Shoppers and workers on their lunch breaks appeared generally supportive.

The public’s backing was remarked upon by rally chair, Jane Aitchison, who in her role as Leeds DWP PCS branch secretary had picketed outside the main benefits office in Leeds. “The level of support we received was amazing and we had workers from shops such as Aldi wishing us well. I think lots of people are pleased we are standing up to this heartless government, which has helped the rich get even richer.”
Britain’s richest people have been able to double their wealth since the 2009 financial crash, with the 15.4 per cent rise in 2013 taking the total wealth of the 1,000 richest men and women up to £449 billion. The gap between rich and poor is now gigantic with the wealthiest 1 per cent now owning the same amount as the 55 per cent poorest in the UK.
TUC regional secretary Bill Adams told the appreciative crowd of a little tale that sums up the attitudes of many public sector workers. “The Tour De France meant many roads were closed on Saturday and so on Friday night many care workers camped out on Woodhouse Moor in order to ensure they could provide an essential service to their clients over the weekend.”
Adams made a special plea for unity between public and private sector workers and attacked the newspapers and senior politicians for suggesting that if the former receive a pay increase it would damage the living standards of the latter. “There is money to pay you a decent wage rise, only under this Government it is allocated to someone else’s pockets.”
As the regional secretary of the North East, Yorkshire & Humberside’s biggest union, UNITE’s Karen Reay, praised those that had sacrificed a day’s pay. She denounced the constant government denigration of public sector workers and spoke of her disgust that over one million people in the UK now need to use food banks to help feed their families. Even then many people are being forced to turn to loan sharks in a desperate battle for survival. She urged people to put pressure on their local councillors to support the pay claim of a pound an hour. “This claim is perfectly reasonable and it is affordable. Fair pay for all.”


There were also rallies and demonstrations in many other locations with around 1,500 in Huddersfield, 2,000 in Sheffield, 300 in Barnsley and 150 in Rotherham.
Posted by Mark at 02:59