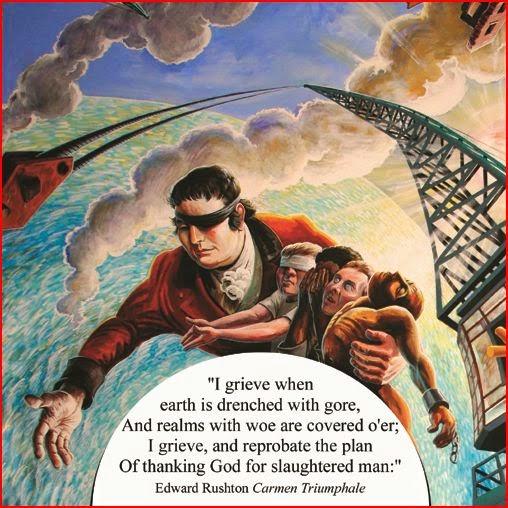 A beautiful colour dome that celebrates the life of Edward Rushton still currently adorns the former Merseyside Trades Union and Unemployed Resource Centre; Hardman Street building that was sold to the owner of Hope Street Hotel, Liverpool in 2010.  The artist of this magnificent work, the future of which remains in doubt, is the late Mick Jones, younger son of the trade union great Jack Jones.

Edward Rushton is one of Liverpool’s great radicals who became a passionate abolitionist after his work as a sailor brought him into contact with the slave trade.

Born in 1756, Rushton was thirteen when he went to sea and subsequently worked on a number of slave ships. At seventeen he survived drowning when Kwamina, a young former African slave, saved him at the expense of his own life. Shortly after - when he found himself on a slave ship - Rushton defied his captain and the threat of a mutiny charge to continuously go below to bring water to the manacled Africans.

His bravery and courage was to come at great personal cost because by the time he returned to his hometown he had contracted Ophthalmia following a highly contagious outbreak amongst the slaves. It left the teenager blind in one eye and partially sighted in the other. He was unable to sail as a result and moved in with his sister, where after studying politics and philosophy he began to write poetry and begin a rhetorical battle with prominent political leaders against the slave trade. This was another courageous move as Liverpool had prospered after it began sending out slave ships in 1699 and at its peak – in 1799 – more than 45,000 slaves were transported to the West Indies from ships based on the Mersey.

Rushton’s radicalism also extended to support for the American struggle for independence, the French Revolution from 1789 to 1799 and the United Irishmen in their struggle for Irish independence. He also backed the rights of workers to combine in unions.

His poetry and writings though proved popular especially as increasing numbers of people began to recognise the need to abolish the trade in human cargo. From the money he earned, Rushton was able to establish The Liverpool School for the Indigent Blind in 1791 on Hardman Street. In 1807, Rushton had an operation that allowed him to regain his sight and he saw his daughters for the first time. He had married Isabelle Rain in 1784. Rushton died on 22 November 1814 of paralysis.

When the Merseyside Unemployed Centre took over the Hardman Street building from what had become the Old Blind School they commissioned Jones to paint the dome in 1986 and he made a fitting tribute to a fine man who remains almost unknown even today. Its survival is though in doubt – see
www.liverpoolconfidential.co.uk/Culture/Arts/The-mural-that-steals-the-Biennial-show
and it may well be that a campaign may be required in the future to ensure it stays.

Meantime, there are plans to commemorate the bi-centenary of Edward Rushton’s death later in 2014. There are museum exhibitions, educational projects and a staged reading of a play based on Rushton’s struggles, UNSUNG. In spring 2015 there will be a full production of the play at the new Everyman Theatre in Liverpool. The play will employ a blind or visually impaired actor and the signer will be involved in the stage performance. As a result the costs of production are slightly higher than normal and an appeal has been made for trade union financial support of £4667.

There is also going to be a Edward Rushton and Romantic Liverpool: A Bicentennial Conference at the University of Liverpool on November 14 and 15 in 2014. See:-
www.bsecs.org.uk

Many thanks to writer John Graham Davies for the photograph and much of the information that appears on this page.
Posted by Mark at 07:46