International support for the Columbian peace process is being generated by Justice For Columbia (JFC) who have organised delegations from Northern Ireland involving unionist and nationalist participants from the Good Friday Peace Agreement. In Columbia the delegation met the President. In Cuba they met Revolutionary Armed Forces of Columbia (Farc) rebels, whilst in Washington earlier this year they outlined to senior politicians their impressions on the situation in Columbia. Establishing the foundations of a new political system is the hope.

The 50-year civil conflict between the government and Farc has left 200,000 people dead in a country where poverty is rife. Formal talks between the two sides started in Havana, Cuba two years ago and are continuing. In May, President Juan Santos narrowly succeeded in winning a second term of office by defeating Oscar Zuluaga, who is opposed to negotiating with the Farc.

The Patriotic March (PM) social and political movement of 1,500 civil society organisations backs the talks but is concerned that civil society is not represented at them. Santos has failed to tackle human rights abuses and Columbia remains the most dangerous place on the planet to be a trade unionist with over 2,500 assassinated by state forces and its paramilitaries in the last 20 years.

Huber Ballesteros, one of the PM leaders, is currently in prison wrongly accused  of ‘rebellion’ and ‘financing terrorism’ and facing 30 years detention. He was arrested last year as striking farmers and their supporters demonstrated against the government’s agricultural policies in which free trade agreements with the European Union and US have flooded the market with subsidised agricultural products at prices farmers cannot match. Ballesteros, is vice president of the Fensuagro agricultural workers’ union, which has strong links with UK unions, especially Unite, whose delegates at a recent rules revision conference warmly welcomed his message smuggled out of prison for them. 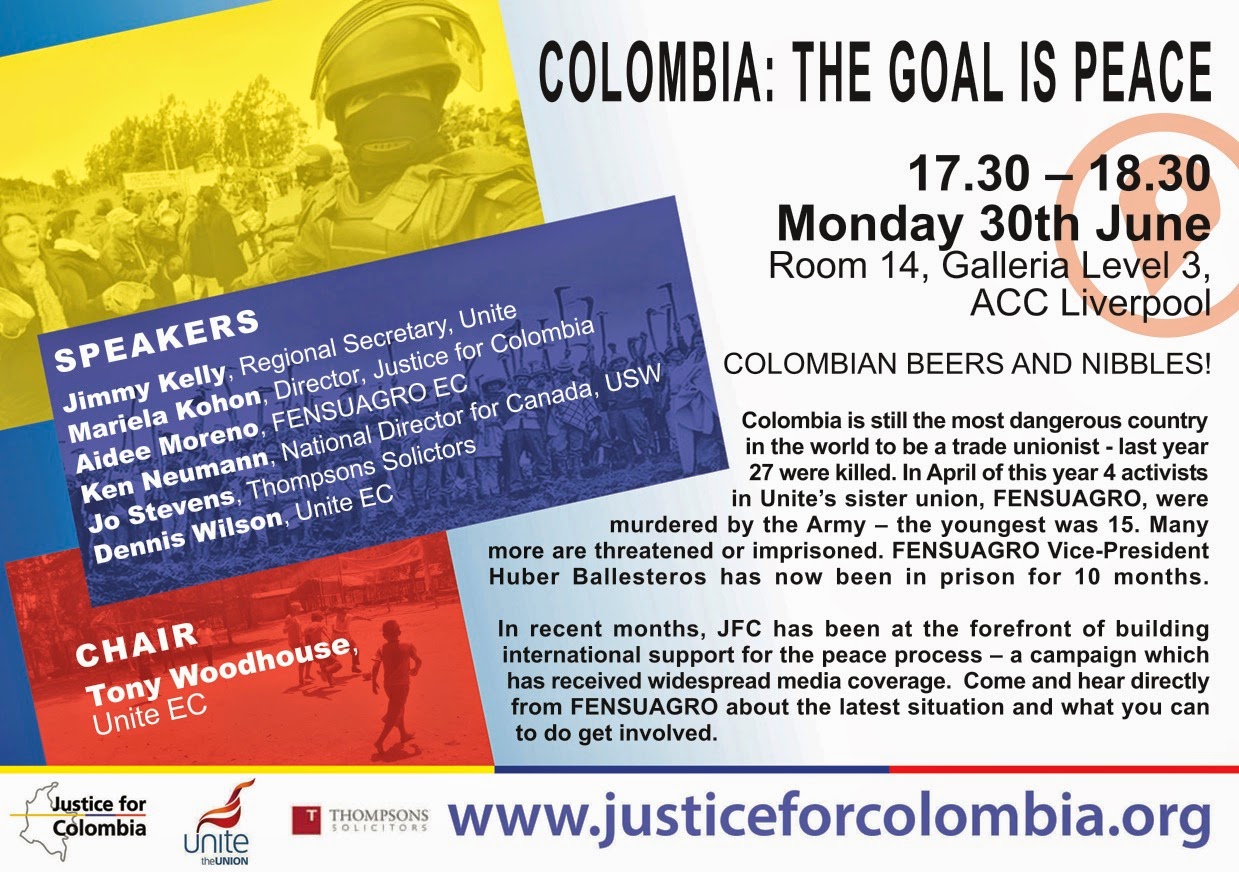 A fringe meeting was also held at the conference. A large attendance listened in silence as, Aidee Moreno, the head of solidarity at Fuensagro, spoke of how her husband, mother, brother and niece had all been slaughtered by the State in a struggle over land rights with peasant farmers standing in the way of foreign multi-nationals keen to undertake oil exploration.

Moreno spoke of the importance of international solidarity. Unite, working through the Workers Uniting international union, has helped provide funds to support families of assassinated members, pay for prison visits and engaging lawyers to represent prisoners. There has been deliveries of toiletries. A number of delegations have visited Columbia, where millions live on less than $2 a day.  Denis Wilson, Unite executive committee member, told the meeting how his life had been changed when he visited the South America state: “You return determined to do things to improve the situation there.” Like all the speakers he praised Aidee Moreno’s bravery.

Moreno, who is aware of death threats against her and goes everywhere with armed guards, said: “We are not only resisting people being forced off their land but also fighting for important social changes including guarantees for education for young people, a free health service, better transport, electricity on farms  and improved housing. It is a necessary struggle.”
Posted by Mark at 08:46