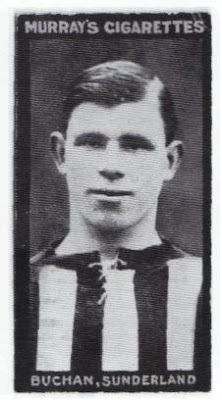 This game was vital to Sunderland and their decisive victory secured the league championship for Wearside. The Sunderland team had been staying at Rhyl during the week and travelled to Bolton on the morning of the match. It was found necessary to change the selected team and Holley was left out with Tinsley replacing him. Weather conditions were adverse with a brisk wind and occasional showers. The crowd was not more than 14,000. Sunderland were the better team from the start.

They won the toss and took advantage of the strong wind to start with a brisk attack but quickly had to fall back and their goal had a narrow escape. This came when Thomson got into a tangle in the face of a rush by the Bolton front line and Jones took his chance to fire in a shot that was eventually cleared. Bolton were showing plenty of dash but they lacked cohesion and method and were not nearly as quick as Sunderland. The 1st goal came from a penalty kick after 10 minutes.
Low had been about to centre when Jones brought him down and Mordue completely beat Edmondson from the penalty spot to put Sunderland ahead.

Bolton soon recovered and made several attacks that caused the Roker defence anxiety. Butler once took a big risk in running out of goal to clear a centre by Stokes. Sunderland were not long in scoring a 2nd goal and it was the result of a remarkable piece of work. It was initiated by Mordue who raced down the right wing and beat Feebury before dropping the ball nicely in front of goal where Richardson volleyed it past Edmondson.

Sunderland's 3rd goal came after 24 minutes play and the credit was shared between Thomson and Richardson. Thomson touched the ball nicely to the centre forward who managed to bang it into the net. Although they faced such a formidable deficit Bolton fought pluckily but could do little against the defence put up by Butler, Gladwin and Ness. At last they obtained a goal though it was more down to luck than good play. Whiteside took a throw in and the ball was sent towards the Sunderland goal.

It bounced up in a most unexpected fashion and took Butler rather by surprise. He knocked it up against the bar and when it came back into play Jones headed it into the net. Sunderland had a marked superiority throughout the half and they worked well together. They had a thorough understanding and Richardson had been seen to advantage in every way. Sunderland were in complete contrast to Bolton who although aggressive lacked direction which spoiled many of their best efforts.

Things were much the same in the 2nd half though Sunderland's finishing was not quite as good. Soon after the restart the home goal had a narrow escape when Edmondson ran out to clear and was challenged by Tinsley. He dropped the ball and had only just regained his goal when Tinsley sent in a shot that Edmondson saved at the second attempt. There were several stoppages and Jones was carried off the field while Tinsley received a nasty blow in the face from the ball. There was some trouble between Richardson and Greenhaigh and the referee had to intervene.
Sunderland tried to add to their score near the end and Richardson missed an open goal from Martins centre. It had been an interesting game and Sunderland's fine open style of play added to the attractiveness.