Blackpool is set to follow St Helens, Wigan and Leigh by establishing a Safer in Town centre scheme aimed at increasing the safety and confidence of people with learning difficulties.
Since November last year, campaigning voluntary group St Helens People’s Choice, with the backing of the local Hate Crime Partnership, has issued participants with key rings and fold out cards to participating people with learning difficulties.


Alongside the scheme’s logo these incorporate drawings of buses, £ signs, intimidating characters and  police cars. This means that anyone with communication difficulties can indicate what is concerning them when they enter public buildings, shops, cafes and pubs that display a matching window sticker to demonstrate the venue can offer support in cases of an accident, harassment or crime. 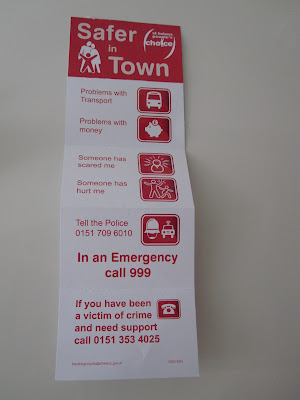 St Helens People’s Choice, a self-organised group of people with learning difficulties, was established in 1994. According to its chairperson, John Horan, “no-one has yet needed to use the town centre scheme but to make sure it will work when it’s needed we have undertaken many practice runs in which people have lost their money, complain of being bullied or of feeling unwell. The response of venues has been good. We established Safer in Town because one of our members suffered serious harassment by young people over many months and had no-one to turn to.”
Horan said 80 venues had signed up to the scheme, which has been replicated in Wigan and Leigh since January this year. Now, Blackpool has established a working group – consisting of councillors, police and local businesses - to develop its own Safer in Town project that aims to expand support to anyone in problems, particularly older people.
The aim is to launch the scheme before the busy summer season. It’s coordinator, Stephen Brookes, a disabled rights campaigner who lives in the seaside resort, says “The idea is simple and effective, and makes life easier for disabled and older people who can be intimidated by the fast pace of Blackpool.”


Halifax is the latest town to announce a similar scheme will be established shortly.